Mully Cup winner lawyers up with the ACT Government 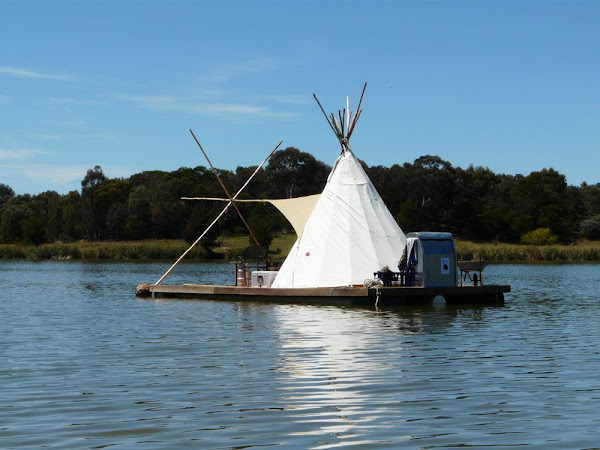 On the same day he won the coveted Mully Cup we’ve had a press release from lakeborne teepee fancier William Woodbridge’s lawyers.

While Mr Woodbridge unequivocally accepts the authority of the ACT Government, he has instructed Williams Love & Nicol to write to the Environment and Sustainable Development Directorate seeking a compromise: simply to allow a reasonable period to find alternate accommodation.

The Industrial Design [student] has used his ingenuity and skill in attempting to address an intractable problem that the Government and the University seem helpless to resolve. In doing so Mr Woodbridge has revealed himself as a character of self determination, self reliance and tenacity. Of all the characteristics that a Government should reward, these are the ones. He has endeavoured to provide an alternate solution for a problem that is seemingly always resolved with a temporary solution.

Williams Love & Nicol has written to the Directorate asking for a reciprocal undertaking; Mr Woodbridge has agreed he will vacate the lake by 30 March 2012, and in return it is asked that the Directorate allow him that time. While this goes beyond the deadline given to Mr Woodbridge of 8 March, Williams Love & Nicol believe that in the circumstances it is a reasonable compromise. Mr Woodbridge attends university and maintains casual employment, and as such he cannot devote his time solely to finding alternate accommodation.

If this weather keeps up, he will be outta there before 8 March.

So Williams Love & Nicol somehow managed to get law degrees (I assume) but never managed to tell the difference between “alternate” and “alternative”?

A situation he created himself. If he has no money then whose ‘life savings’ of $4000 did he spend on this thing?

Wants to know who to blame? Pay $20 and get a mirror put in his tent.

I can’t wait till those lawyers work pro bono for me when I decide $280/week is too much.

Oh hang on, I already have (I shopped around).

Newcaslte Uni offer Ind. Design and let me tell you, it is a awesome place for young people, and the resnt is ridiculously cheap compared to Canberra.

I can’t wait till those lawyers work pro bono for me when I decide $280/week is too much.

Oh hang on, I already have (I shopped around).

When you’ve got all the nation’s media beating a path to your door and you’re doing something unusual like living in a teepee on a raft I’m sure a law firm will be happy to take up your case for the publicity.

So he can afford to hire a law firm, but can’t afford accomodation at UC? He attends university and maintains casual employment so doesn’t have time to finding alternate accomodation? Some of us work full time and yet still manage to get rental accomodation. If this idiot had not ditched the UC accomodation in the first place I would suggest he wouldn’t have this problem. Send the sherriffs round to evict him on the morning of the 8th I say…

I wonder which cost more?

Worth a shot I guess.

Timmy Holness - 25 minutes ago
Roslyn Thomas . I think you need some coffee View
SC Williams - 30 minutes ago
Definitely. I had a woman blast her horn at me because I stopped at a school crossing to let kids cross. Kept blasting until... View
Tony Kingston - 30 minutes ago
I find it interesting that we have road rules and licenses to keep attitudes and opinions out of traffic. But egos often take... View
News 9

Lisa Morr - 44 minutes ago
Tom Leahey duh! they want more votes View
Joey Mann - 13 hours ago
Tom Leahey they don’t want to lower the voting age below the age of criminal responsibility, what are you on about View
News 8

Karl Edmondson - 1 hour ago
If only they ate mice. View
Lewis P Owlay - 5 hours ago
I believe you mean the Delta Myna View
Lyndsey Simcoe - 6 hours ago
Graham Hatch see! They are psychos! View
Sport 4

DrLin - 3 hours ago
Foresight serves you well, I received notice yesterday of a 12% increase to the price yesterday. View
Property 12

John Moulis - 3 hours ago
They must have a lot of pull. Even people on Sydney's upper North Shore who want to remove trees which are blocking the view... View
Pam Dovey - 3 hours ago
Margaret Hunt did you see this? View
Run_W - 4 hours ago
Wasn't this the Club that was complaining last month about being broke and if someone put planes on the lake it would mean th... View
News 12

Ben Johnston - 12 hours ago
"In a 50-minute ministerial statement this morning (22 June), Business Minister Tara Cheyne told the Legislative Assembly tha... View
summs - 15 hours ago
At least 15% of the budget went to 19 (2%) businesses whilst 23% of the businesses received less than $50? Was the scheme int... View
Motoring 3

David Hennessy - 15 hours ago
Wish they were as quick to fix the problems in the CTP system for pedestrians and cyclists who are damaged for life but have... View
show more show less
*Results are based on activity within last 7 days

Motorists involved in collisions with vulnerable road users may face a specific charge and much stiffer penalties if convicted under...
Opinion 89

@The_RiotACT @The_RiotACT
Fire destroyed their Wallaroo home of over 50 years. Bernie O'Brien relives the terrifying few minutes he and his family escaped the blaze https://t.co/cHlAdTrlRY (23 minutes ago)

@The_RiotACT @The_RiotACT
RT @HandmadeAust: We are very sad to announce that we need to postpone this weekend’s handmade market. This is not a decision we have made… (48 minutes ago)