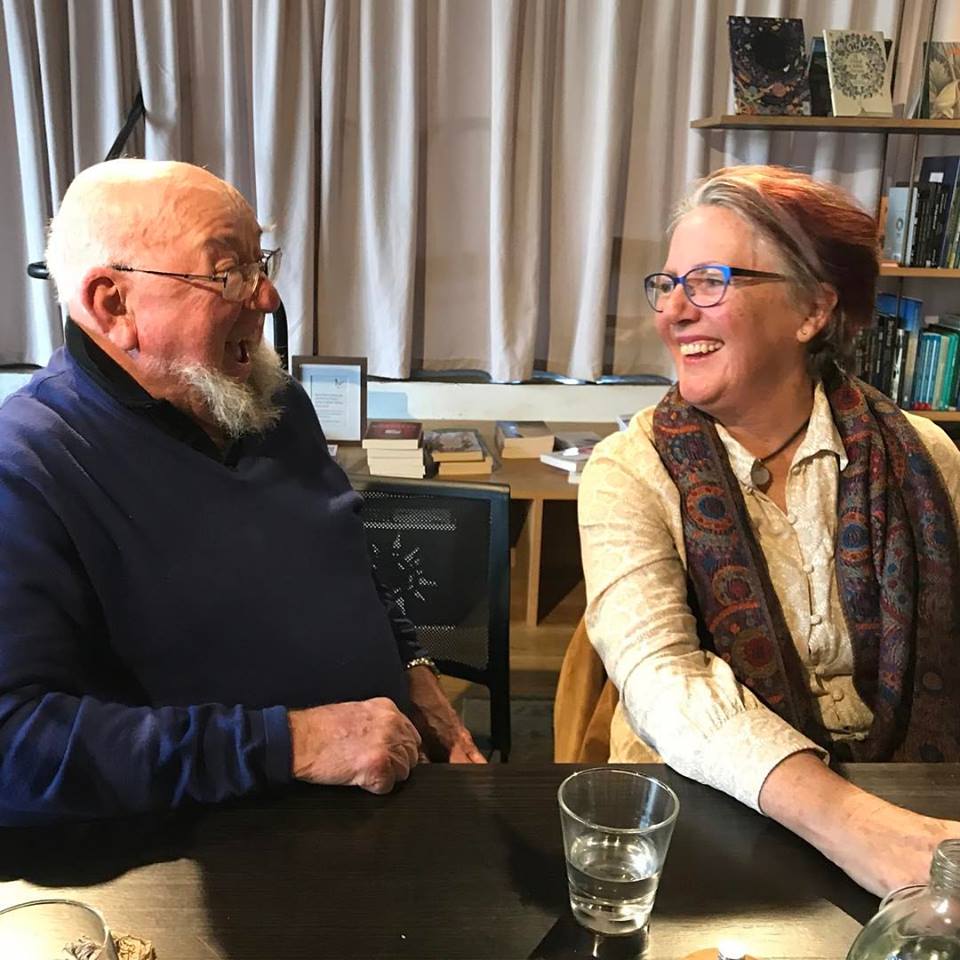 “Come to lunch,” said a friend of mine. We have been meaning to catch up for months to discuss where our professional interests coincide and finally found the time. But when I got to Muse Canberra, she ditched me. She was sitting next to Booker prize winner Tom Keneally, author of the book that became the movie Schindler’s List, and she would not give up her seat for anybody.

I didn’t blame her. Nor was I upset because I had plenty of interesting people to talk to at my end of the table, plus great food. We were at the first of Muse Canberra’s Long Table series of lunches. Muse plans to invite a series of eminent and interesting people over coming months for intimate lunches of only twenty guests. Some will be authors, but some will be people famous for other things such as, for example, sports. This lunch featured Tom Keneally and his daughter Meg Keneally, who discussed and provided readings from the Monsarrat series. 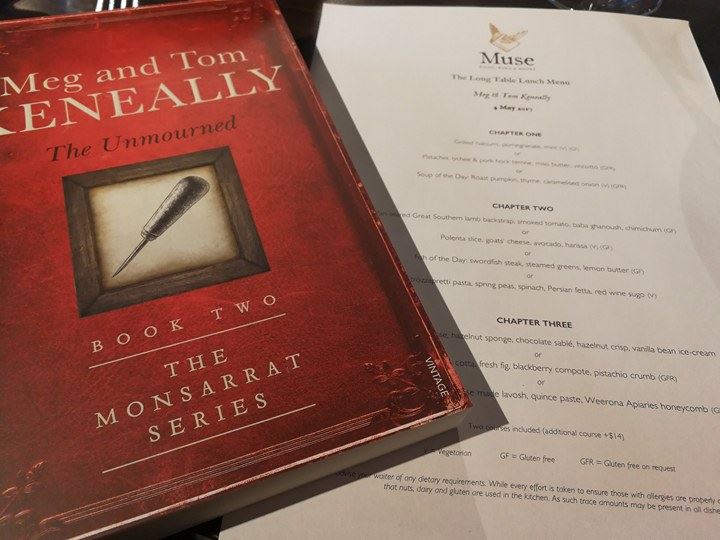 Tom is larger than life with a hearty laugh, a twinkle in his eye and an art of storytelling that kept us enrapt and engaged. He started by acknowledging that one of the Canberra diners was the child of two Schlinder’s List survivors; her mother only a young girl during the war. Yet the horror of that time left a permanent mark on her mother and for years she always made sure she had a crust of bread on her, just in case she was apprehended and taken away. Although illogical, this is typical of the type of post-traumatic stress disorder reaction that characterised the survivors.

I was privileged to hear Tom speak five years ago, and his words still encourage me on my path as a writer. I remember (he may not) encouraging us to write at least 500 words a day, and not to stress too much about whether they were any good or not. Still being in the presence of such a literary luminary is somewhat daunting. I was reassured that even his daughter Meg feels the same. She shared candidly what it was like for her, a former journalist, to write with her father – at his suggestion. While the strong rapport between them was evident (“she writes 4,000 words a day and I am all for engaging in child abuse”, he joked), she shared openly her difficulty in finding her own voice, and how she somewhat regretted teaching her Dad how to use track changes.

“Originally we planned to write a section each based on what he had already written,” she said. “But it didn’t feel right so in the end, I just sat down and rewrote, then worked with him on the plot and direction. He taught me a lot. For example, one character had a temper and took things out on inanimate objects in the kitchen. He showed me how to rework that violence against a recalcitrant knife into a psychological coping mechanism.”

“Meg is a natural at narrative,” said her Dad, and beaming with pride ever so slightly.

The Monsarrat series is set in Australia’s early convict history. They are detective novels, yet imbued with insights of early colonial life are much richer than a mere ‘whodunnit’ plot. Their writing is inspired by their own convict ancestral history. The Keneallys are passionate about the untold history of Australian convicts, especially women and their children, and preserving their histories. Did you know, for example (I didn’t) that there were 27 children aboard the first fleet? 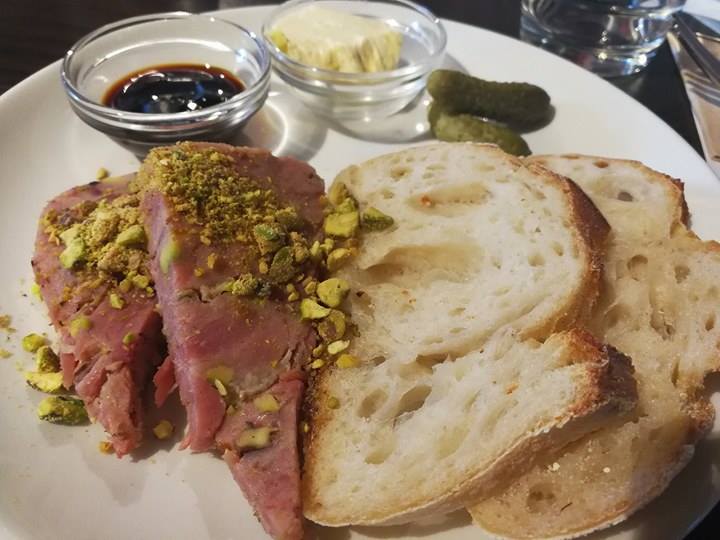 The food and wine at Muse did not disappoint. The two-course meal, plus wine and tea/coffee ($75 including a copy of the second book in the Monsarrat series) allowed up to four choices in each course. It was difficult to choose, but I was happy with my entrée of pistachio, lychee & pork hock terrine with miso butter and vincotto, which I enjoyed served with house Shiraz. For main I had a reassuring pan-seared Great Southern lamb backstrap, smoked tomato, baba ghanoush and chimichurri. I almost wished I wasn’t dieting so that I could splurge on one of the three dessert options ($14 extra for an additional course). Next time maybe. 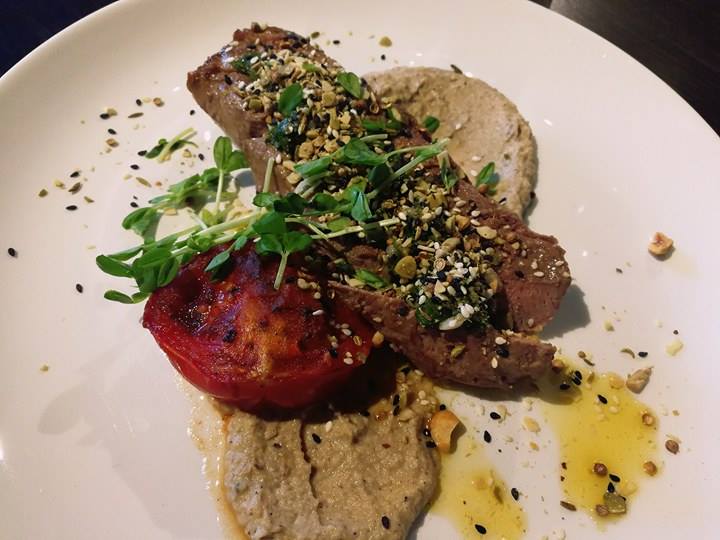 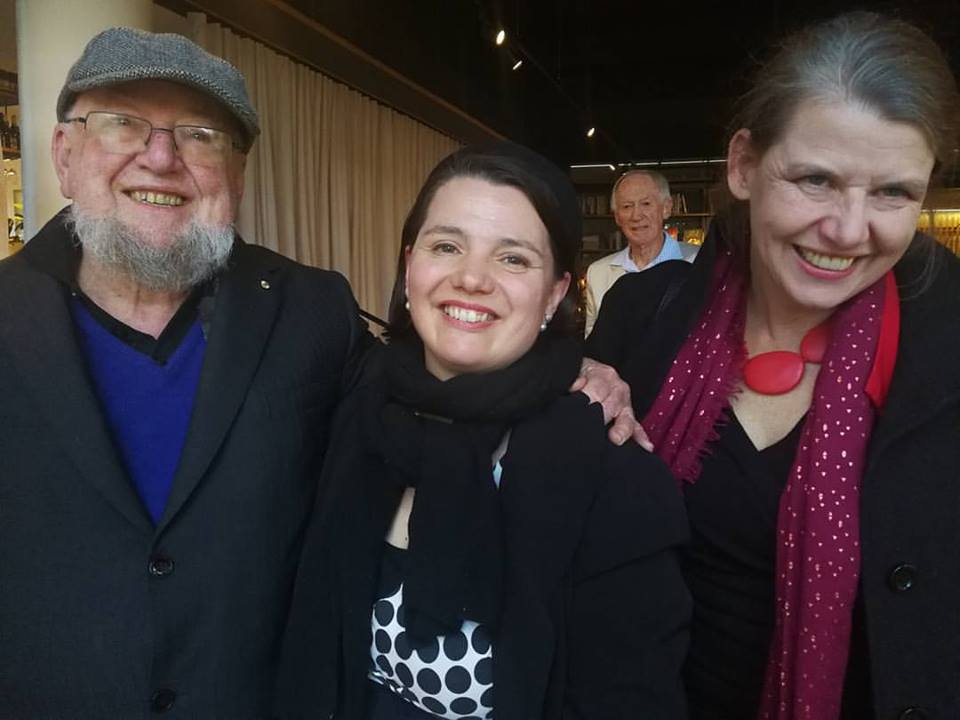 Who would you like to lunch with at Muse Long Table lunch?

Thank you Suzanne. It was a great lunch, wasn’t it. I devoured the first Monsarrat book within days, now I am onto the second.

Oh, Serina, Great article; you captured this lunch brilliantly and am so glad you mentioned the “recalcitrant knife” that I loved so much as an example of the extraordinary writing skills of these authors, one of many examples in this series. I hope to see you at the next Long Table lunch coming up soon.