Music awards return to Canberra with a big bang 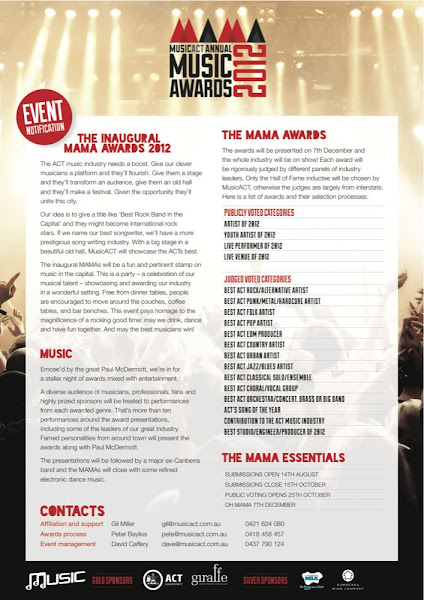 Music ACT has been in touch to let us know they’re planning a stonking great awards ceremony in December hosted by Paul McDermott at the Albert Hall:

On Friday December 7 at Albert Hall, 19 awards covering a huge range of genres, from Best Rock Group to Best Orchestra/Big Band, to Best Folk Group to Best EDM Producer, will be presented during a glorious celebration of our thriving music scene.

This won’t be a regular awards ceremony. Forget hours of boring speeches and bad food, and envision a night of dancing and drinking hosted by the great Paul McDermott where the main focus is what we’re there to recognise and rejoice in – outstanding local music.

We’re not just giving a gong to those on stage or behind the decks however, as awards for Best Contribution to the ACT Music Industry and Best Studio/Engineer/Producer are also on the list. That’s what the MAMAs are all about: recognising excellence in every aspect of our music industry, while relishing it at the same time.

Submissions for each award category open this Tuesday (14 August) and will close on 15 October. Each category will be judged in a transparent and rigorous manner by a panel of interstate industry experts. There are also four major awards that will be up for public vote: Artist of 2012, Youth Artist of 2012, Live Performer of 2012 and Live Venue of 2012.

babyal - 1 hour ago
Ken Behren CR is correct the legal issue if something were to happen would be so not worth the trouble. you want to change le... View
Elf - 1 hour ago
People just don’t care anymore. Forget about the long grass on public land, have a look at the naturestrips out the front o... View
jwinston - 1 hour ago
Utilise the the many idle hands at the Alexander Maconochie Centre by making the prisoners mow the grass around Canberra. Unl... View
Community 45

@the_riotact @The_RiotACT
The ACT has recorded its 12th #death in the latest #COVID outbreak as well as eight new cases in the 24 hours to 8 pm last night https://t.co/L2fS7vdJgk (49 minutes ago)