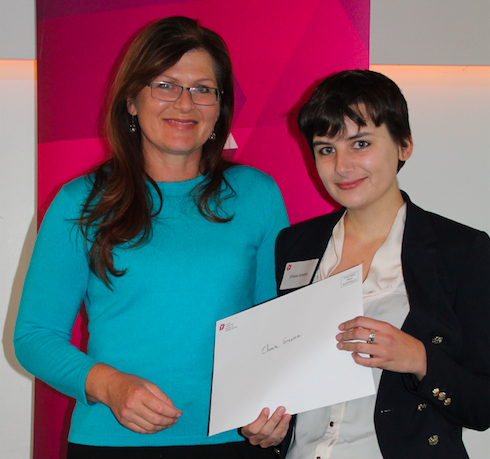 Would you be brave enough to learn a new instrument, form a band and write a song to perform at a live venue in just one week?

For some, the prospect is terrifying, but for the young women who participate in Girls Rock camps around the world every year, it’s an opportunity to develop creativity, teamwork and leadership skills.

Canberran Chiara Grassia (pictured above, right) plans to bring the first Girls Rock camp to Australia next year. She has received funding from YWCA Canberra to travel to the United States later this month to volunteer at two Girls Rock camps before returning to run the inaugural Girls Rock Canberra at Ainslie Arts Centre in January 2016.

“Girls Rock is a week-long program that originated in the US where girls aged eight to seventeen form a band, learn an instrument, write a song and perform in front of a live audience. It doesn’t matter if they’ve never picked up an instrument before,” she says.

Chiara was first exposed to the Girls Rock concept when she volunteered at a Girls Rock camp while traveling to the United States in 2013. She returned again in 2014 and now, as a result of YWCA Canberra funding, will attend Girls Rock camps in Austin and another in Oakland to broaden her knowledge and experience of Girls Rock so that she can set up a successful Australian spin off.

“There are Girls Rock camps in Brazil, Europe and even Bahrain, but not in Australia. I love the sense of community that they build and I want to bring that to Australia. Every summer in the US there’s a new camp starting up, and there’s no reason why we can’t have a camp here too,” she says.

Depending on which Girls Rock camp participants attend, the program may also involve creative workshops in songwriting, experimental sounds, self defence, zine making, creating merchandise or body positive dancing. Chiara says that the program for the Girls Rock Canberra program hasn’t yet been finalised, but will focus on encouraging girls to be leaders and fostering team skills.

“Girls Rock has a really great social justice bent and it empowers young girls to be confidence and proud of being creative and expressing themselves,” Chiara says.

In addition to completing her honours in sociology at the Australian National University this year, Chiara is a producer of Noted Festival, co-founder of the Canberra Zine Emporium and subeditor of BMA Magazine and Feminartsy.

She is currently working to secure additional Girls Rock Canberra project funding while also reaching out to local musicians and others in the community who might like to be involved as volunteers. If you’d like to volunteer or want to be notified when Girls Rock Canberra registrations open, email c.a.grassia@gmail.com.

@The_RiotACT @The_RiotACT
The ALP's been in charge for almost 20 years but health has remained a constant sore point for successive Labor governments. Why? https://t.co/aGuaozRh3c (35 minutes ago)