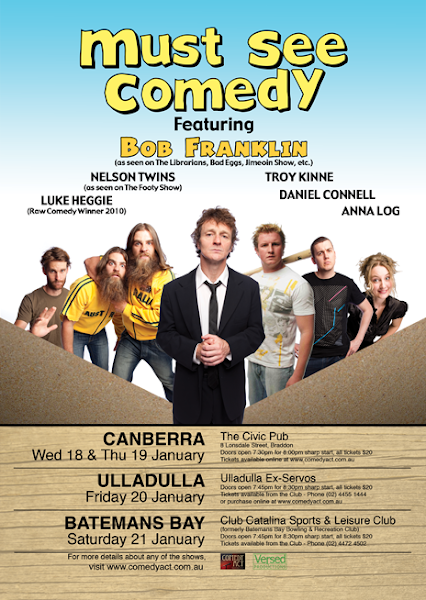 A stand-up comedy show featuring one of Australia’s most acclaimed and experienced comedians and a host of the country’s best up-and-coming comedic talent will hit Canberra in January.

The Must See Comedy tour features Bob Franklin, known by many for his appearances on television shows such as The Librarians, Thank God You’re Here and The Jimeoin Show, and his appearances in films including Bad Eggs and The Craic. Franklin’s comedy has been described as “…keenly observed…uniformly superb…Absolutely hilarious” (Beat Magazine, Melbourne).

The short tour includes 2 shows at the intimate upstairs room at Civic Pub, which has been referred to as the best room for comedy that Canberra has ever had, before heading on to shows in Ulladulla and Batemans Bay.

Daniel Connell is performing as part of the shows, and is looking forward to the tour. “We are all very excited to come to Canberra and the coast, being from Batemans Bay and having lived in Canberra for three years myself, it’s a great feeling bringing a quality show back to town”.

Connell was hand picked by Melbourne International Comedy Festival organisers earlier in 2011 to perform as part of The Comedy Zone show, which showcases the best new comedy talent in Australia. He has performed alongside the likes of Jeff Green, Adam Hills and Dave O’Neil, and is looking forward to working alongside another of his comedy heroes. “I watched Bob Franklin as a teenager so to now be doing a show with him is pretty cool. The other acts in the show are fastly becoming household names: Troy Kinne has been in the USA for most of 2011, The Nelson Twins have been on The Footy Show, Luke Heggie won Triple J Raw Comedy in 2010 and Anna Log is one of Melbourne’s favourite female musical comedy acts”.

The Must See Comedy shows represent outstanding value, with all tickets only $20. Tickets are available from www.comedyact.com.au or else take a chance on still being able to get them at the door on the night (not all that likely).

JS9 - 4 hours ago
Any actual evidence to support a claim of a 'mass exodus' to Queanbeyan to shop? There must have been some either exceptional... View
chewy14 - 4 hours ago
JC, I asked how this was in ways different to the National Plan as you claimed. I agree with you that the quick changes that... View
HiddenDragon - 6 hours ago
In the cosily predictable, symbiotic ecosystem which is the ACT politico-media complex, the unambiguously critical lead story... View
News 5

Capital Retro - 4 hours ago
A decision made by people who have never used Centrelink's services and who will never have to. View
JS9 - 4 hours ago
To be fair, the ones primarily promoting densification int his case (ACT Gov) have zero to do with the decision to move Centr... View
Lifestyle 33

jorie1 - 7 hours ago
Are you sure that it is current renters buying properties? The research I have read shows that many people who rent will do s... View
jorie1 - 7 hours ago
Hi Assiduous, I do agree that $500 per week is a lot of money - but the majority of that money goes to the ACT government in... View
assiduous - 7 hours ago
$500 per week is not low - it is enough to build a modest detached family home every 10 years. It is a reflection of Australi... View
show more show less
*Results are based on activity within last 7 days