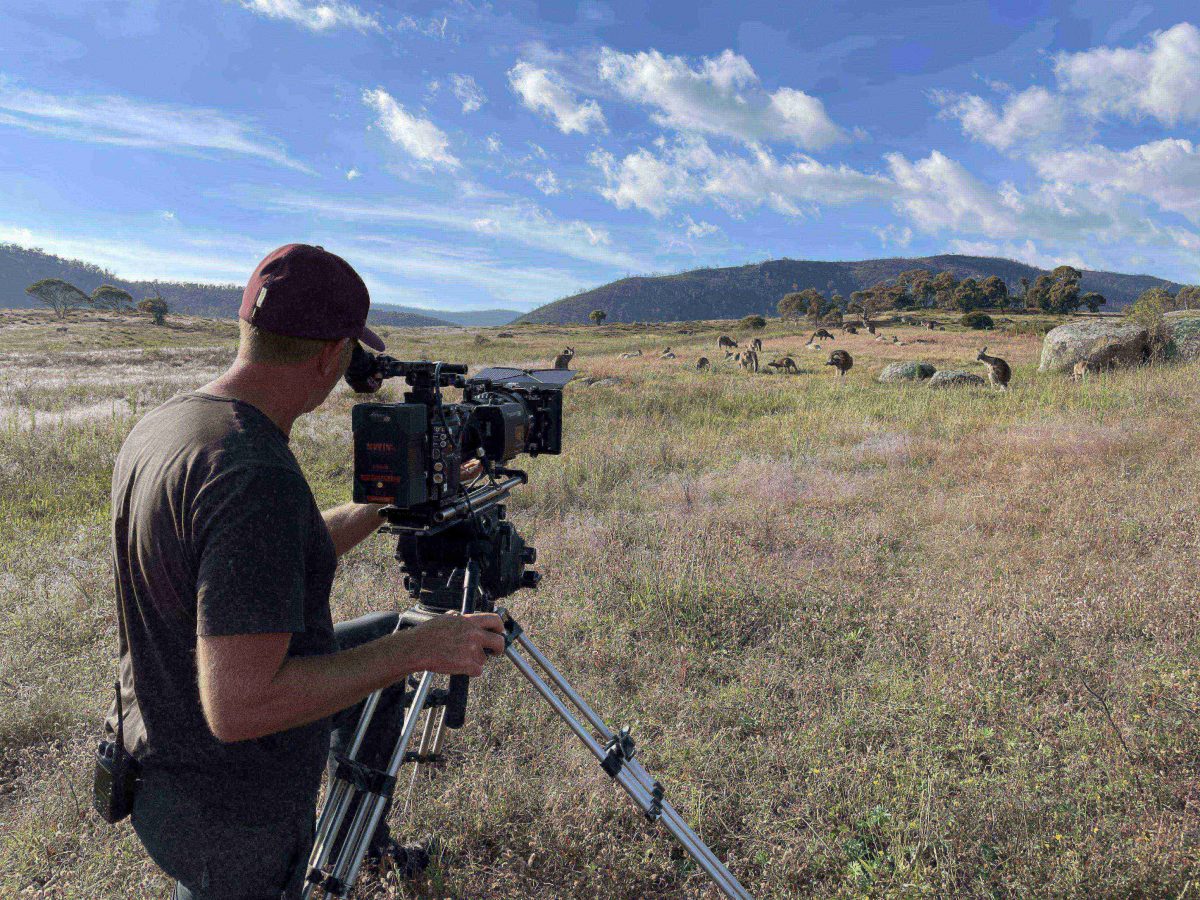 The team spent over a year filming more than 300 hours of footage to capture the story of Mala. Photo: Netflix.

In January 2021, Liam Neeson’s stunt double was tearing through the streets of Civic in a V8 Dodge for a crucial car-chase scene in Hollywood’s Blacklight.

Further south in the hilly wilderness of Namadgi National Park, the cameras were rolling on another big-name production.

Kangaroo Valley premiered on Netflix in December as a 76-minute documentary showing the “coming-of-age story of a young kangaroo joey called Mala”.

The Los Angeles-based team from AMPLE Nature spent more than year (on and off) in the national park, filming 300 hours of footage, after securing a permit from the ACT Government to operate during COVID lockdowns.

Director Kylie Stott, who previously helped shoot scenes for Sir David Attenborough’s Great Barrier Reef, was the only woman on set and “incubating a joey” of her own. She recalls how the nine-strong crew all crammed into a three-bedroom cottage with one shower and one outdoor dunny between them, and a woodfire “we had to keep going the whole time”.

“We would wake up predawn and head out to film at first light,” she says.

“For the first shoot I was actually sleeping on a cot bed on the veranda and sometimes I’d hear the dingoes out hunting in the dark before I even got out of bed.”

Kylie grew up in Australia and cinematographer Ben Cunningham here in Canberra, and remembers rescuing wildlife and raising several joeys as a kid. 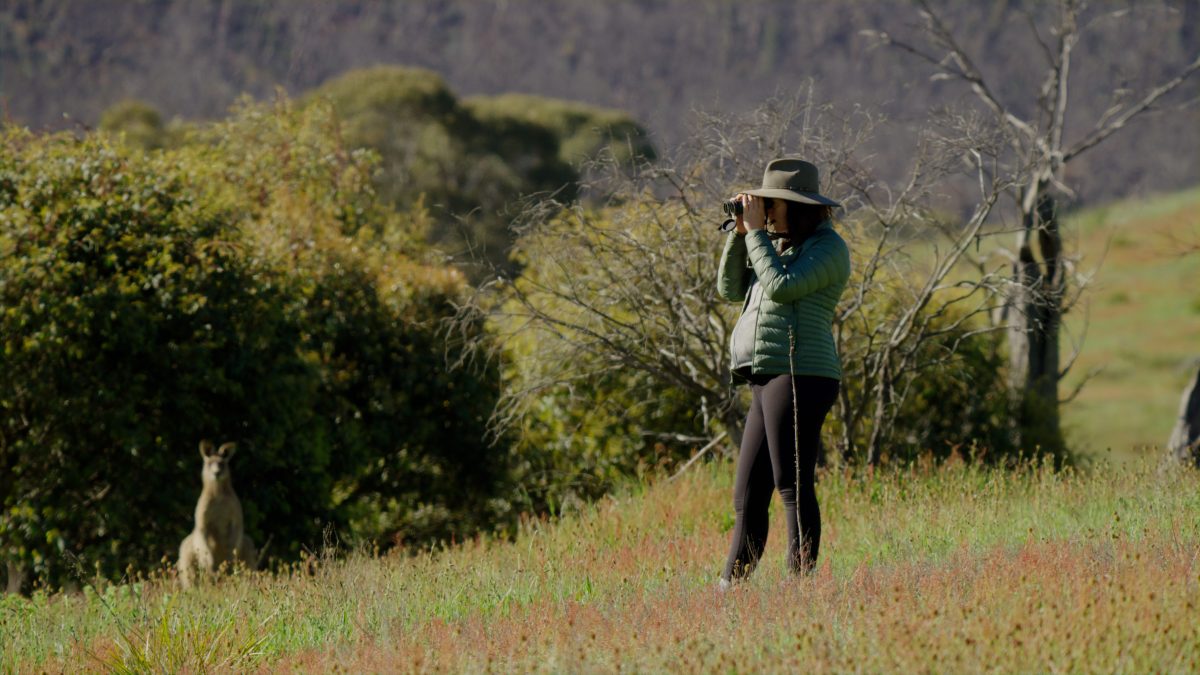 Director Kylie Stott was pregnant for much of the filming. Photo: Netflix.

“I was also a kid that loved nature and I wanted to make this film something that children could fall into the story – like a fantasy film where you get swept up in the journey and the excitement,” she says.

She met like-minded people after moving to the US, and arrived at the idea of a documentary cast in the image of ever popular, feel-good movies from Disney and Pixar.

“Most nature films look to the obvious heroes like lions and tigers and bears but the story of a young nervous joey, who can barely stand up when she comes out of the pouch and then faces such difficult odds to survive her first year – it’s an unexpected, powerful and relatable story,” she says.

“Not all of us are born brave – we have to learn to be brave.”

All they needed was a location.

“Namadgi is on the scale of Yellowstone and Serengeti, and people living in Canberra don’t even know what’s going on there,” she says.

“You have giant mobs of kangaroos living in this giant, open valley and then the dingoes come down from the hills to hunt almost every day – it’s a spectacular place to see some of the greatest wildlife drama on the planet.”

ACT Parks was worried a camera crew traipsing over the area – still damaged by the Orroral Valley bushfire – would have detrimental impact on regrowth. Then there was a COVID lockdown to contend with. But with help from Screen Canberra, all the approvals came through and they set to work. 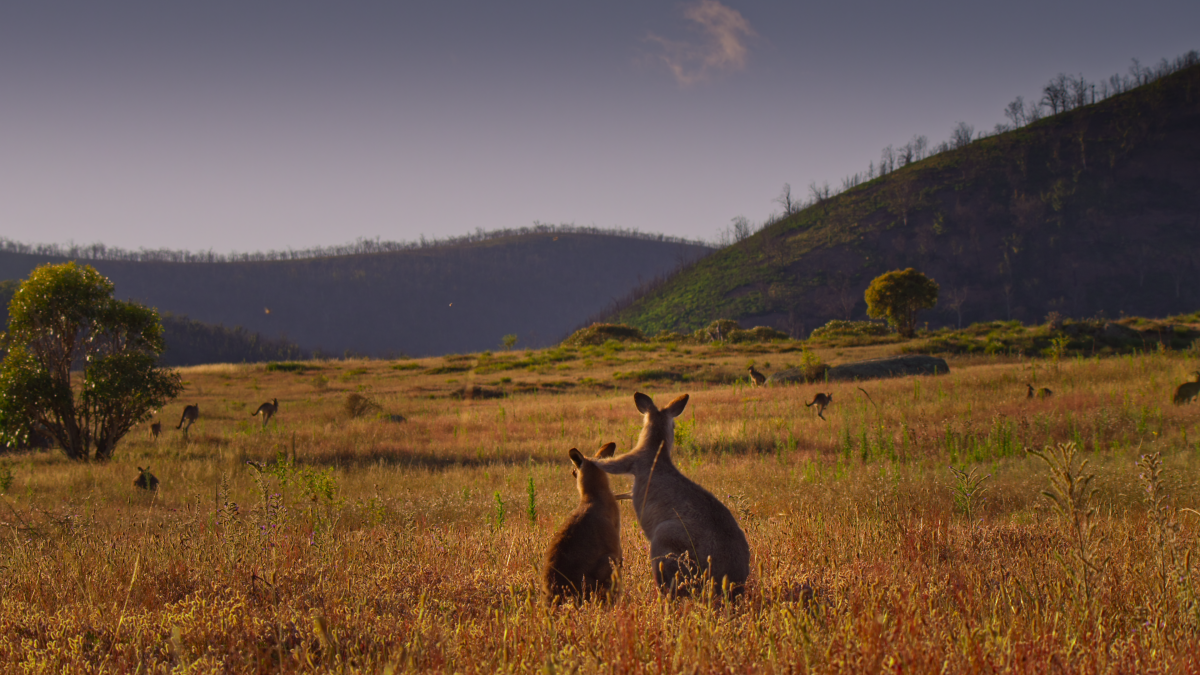 “To keep up with the dingoes while they were hunting we had to use a helicopter which was really exhilarating,” Kylie says.

“But some of my favourite moments were the quiet moments we spent with the kangaroo mob – they learnt to trust us and we really got to see into their world, they’re very social and funny to watch.”

As for her pregnancy, Kylie says she hardly noticed – and not just because the cottage had only a tiny mirror in the bathroom.

“I stopped sleeping on the cot bed outside, but honestly making this film and being out every day working with wild animals is such a privilege. I walked a lot of miles each day even when I was heavily pregnant, and was up and down in the helicopter, but I hardly even noticed.”

Since its Netflix premiere, Kangaroo Valley has received a 7.3/10 rating on IMDB, with reviewers comparing it to March of the Penguins and praising its editing, music and family friendly nature.

Australian actress Sarah Snook (known for her starring role on Succession) narrates the film, while it also debuts a song by Australian pop star Sia called “We Can Do Anything”.

Kylie says AMPLE is working on new projects in other parts of the world, but the ACT is definitely on the cards.

“We’d absolutely love to return to the ACT for the right story.”

No animals were harmed in the making of this film?