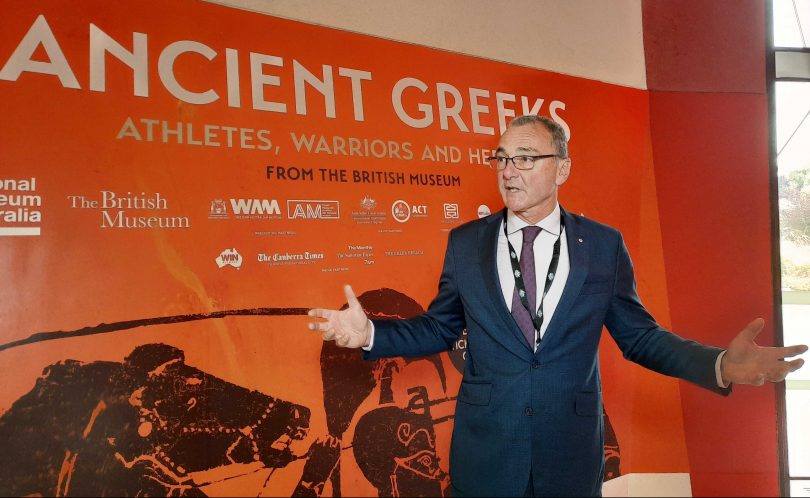 National Museum Director Dr Mathew Trinca: “There’s so much from the ancient world, the classical world, that merits examination for us today.” Photo: Ian Bushnell.

Tickets have gone on sale for the National Museum of Australia’s summer blockbuster, Ancient Greeks: Athletes, Warriors and Heroes, from the British Museum.

The Museum, which reopened its doors yesterday (30 October) after the COVID-19 lockdown forced it to close, is now counting down the days to when the iconic objects, which have never toured to the Southern Hemisphere, arrive and the exhibition opens on 17 December.

Director Mathew Trinca said there were times when he thought the show would not make it to Canberra, having been postponed last summer due to COVID and Australia having to negotiate public health restrictions and lockdowns this year.

“I cannot tell you how excited I am and how pleased I am that we’ve been able to hold on and to make sure that this show now opens over the summer,” Dr Trinca said.

“It’s a show that we need – a fabulous survey of the Ancient Greek world, a world that we know and says so much about deeply human values and what it means to live on the planet in so many ways.

“We keep going back to the Greeks as a kind of a source and we should because so much of what we see in their lives we can make some sense of in terms of our own.”

They come not just from what is now modern Greece but across the Mediterranean where the Ancient Greeks established colonies.

“There are great works here from Italy, from North Africa because they were home to Greek communities – the statues, the marbles that are included in this show, the amphora, the beautifully decorated vases you see in this show, are all rare things that allow us to visit the Ancient Greek world even if we can’t really leave our shores yet in this country,” Dr Trinca said.

The exhibition will provide an insight into how the Ancient Greeks lived, worked and thought, particularly the sense of competition and contest they felt.

Dr Trinca said it was fitting that the exhibition comes not long after the world celebrated the Tokyo Olympics, also delayed by the pandemic.

“It’s this show that underpins our understanding of why we even come to celebrate the modern Olympics now – when we think about that spirit of competition which was really given a particular form and life in the ancient world,” he said.

Dr Trinca said the show should be seen as a counterpoint to the previous blockbuster from antiquity, Rome: City and Empire, because the Romans looked to Greece as a source.

He said the new show was what Canberra needed as life opened up and the economy recovered, and that bringing it to the capital was a way the Museum could play its part in that.

“The idea that we’re bringing the best of what the world offers to these shores is precisely what we need to be doing amidst the challenges that we’ve seen from this pandemic,” Dr Trinca said.

“There’s so much from the ancient world, the classical world that merits examination for us today – that idea of resilience, of passage, of trial.” 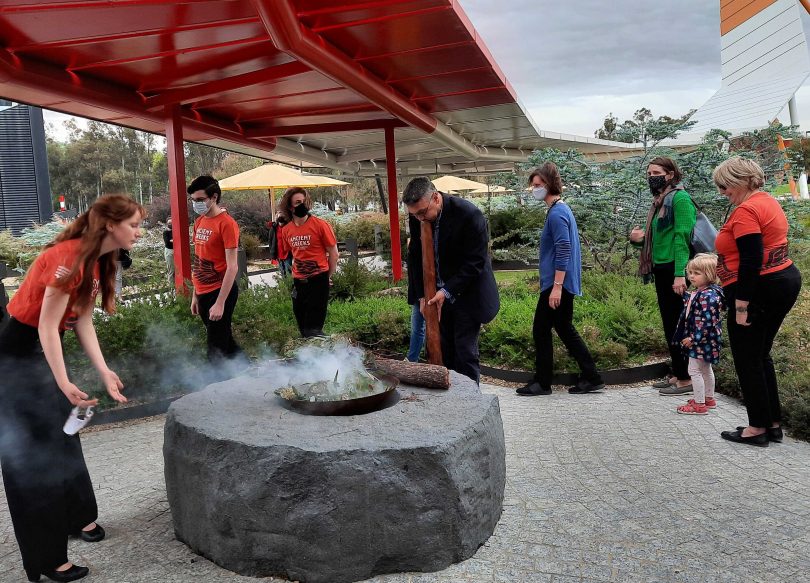 Dr Trinca said the forced closure had been tough for the Museum with the loss of its public and associated revenue exacerbating pressures that were already building, and it faced a period of stocktake as it looked to the future.

The Federal Government had provided extra support to help cover the impacts of the pandemic this year and into 2022, and Dr Trinca said the Museum would be continuing to work with government to ensure it can get through the challenges that lie ahead.

Part of that will be thinking about how to chronicle the impacts of the pandemic on Australian life.

“I hope we’re sending a signal about the capacity we’ve got collectively to pick up the pieces of our lives again and move forward,” Dr Trinca said.

The British Museum has allowed the NMA to give the exhibition an extended run to 1 May.

Ancient Greeks: Athletes, Warriors and Heroes will also be at the Western Australian Museum in Perth from 20 June to 7 November 2021 and at T’maki Paenga Hira Auckland War Memorial Museum in 2022.