Big Al sent in the following:

A couple of pictures from the National Wine Show of Australia held at EPIC this week.

The Royal National Canberra Agricultural Society hosts the national show in November each year – where wines from all over Australia and New Zealand fight it out to see who’s best of the best. To gain entry to the show a wine will generally have to have been awarded at least a silver medal at a regional or state show.

Over 1200 entries were judged by twelve judges over three days. I don’t much fancy the idea of shaping up to 71 2004 and younger shiraz’s first up at 0830 in the morning! 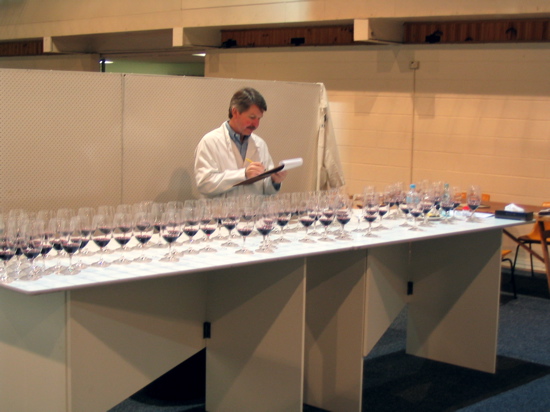 The cred of a wine show is probably centred on the judges that they attract – The National attracts the best in Australia so it’s seen as the peak in competition.

There’s no public tasting but there is what they call a VIP tasting next week – tickets are distributed through sponsors of the show and to members of the RNCAS – they’re pretty hard to come by.

Do you know whether there’s a public tasting day, a la the Reisling Challenge?

What’s the story with the Canberra show? I understand some wine shows are a bit of a joke, others well regarded.

I love the white coats to try and look professional!

Stephen Dixon-Jain - 6 hours ago
Thanks for the suggestion, Julie. I've just adourned our letter box with the colours of the Aboriginal flag. Stephen View
Julie Macklin - 8 hours ago
People crowded together. Unbelievably irresponsible. There are other ways to make the point, and a more permanent point to re... View
Community 14

@The_RiotACT @The_RiotACT
For Our Country, the Australian War Memorial’s Aboriginal and Torres Strait Islander memorial, has taken out the top gong at the ACT Architecture Awards on Friday night, winning the prestigious Canberra Medallion. See all the winners https://t.co/dKch27SZqs (46 minutes ago)