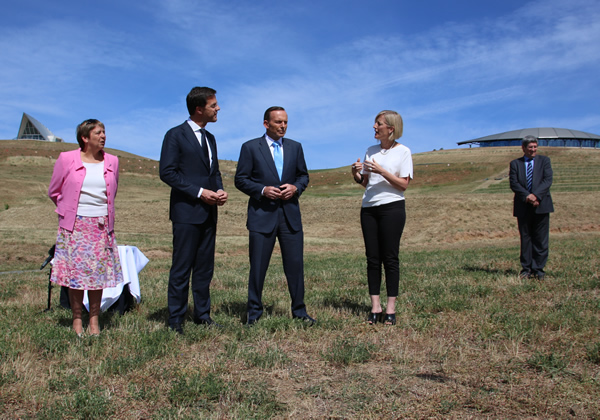 Chief Minister, Katy Gallagher today hosted His Excellency Mr Mark Rutte, Prime Minister of the Kingdom of the Netherlands along with The Honourable Tony Abbott MP, Prime Minister of Australia to plant a Silver birch tree at the National Arboretum in recognition of the strengthened relationship between Australia and the Netherlands following the tragic events of MH17.

The Chief Minister said she was delighted to join His Excellency Mr Rutte, along with Prime Minister Abbott to plant the Silver birch in the lower part of the Central Valley.

“The MH17 tragedy moved the ACT community greatly through the loss of Canberran, Liliane Derden, and I know the visit by His Excellency will be well-received by all those affected as a result of such an unspeakable event,” the Chief Minister said.

“The Silver birch is a species of tree that is well represented across the Netherlands in its beautiful woodlands, and I am pleased that we now have this tree to provide a quiet place of reflection for Canberrans and visitors alike.”

The National Arboretum is fast becoming a symbol of the many relationships Australia has with other countries. The Central Valley now hosts a number of trees planted by Heads of Government, Heads of State and royalty, including the most recent additions by the President of Singapore and the Queen Mother of Bhutan.

“It is always an honour to welcome Heads of Government to the ACT and to show them one of Canberra’s most popular national attractions, the National Arboretum, and in time, the Central Valley will be a spectacular reminder of the friendships our country, and indeed, the ACT has overseas.

“It will also continue to contribute to the Arboretum being a repository of symbolic and endangered tree species from across the globe,” the Chief Minister concluded.

” a repository of symbolic and endangered tree species “.

Maybe post the 2016 ACT election, the current ACT Gov’t can be planted there then as a symbolic representation of poor decision making, wasting Ratepayers $, tripling of Annual Rates, poor fiscal management, etc.

Trees mean a lot to Labor people.
Remember the “Tree of Knowledge” in Queensland somewhere, where it all began?
Then there was “The Light on The Hill”. Mmmmm, when is the rotating beacon being installed on Dairy Farmer’s Hill?

” a repository of symbolic and endangered tree species “.

Maybe post the 2016 ACT election, the current ACT Gov’t can be planted there then as a symbolic representation of poor decision making, wasting Ratepayers $, tripling of Annual Rates, poor fiscal management, etc.

“The Silver birch is a species of tree that is well represented across the Netherlands in its beautiful woodlands, and I am pleased that we now have this tree to provide a quiet place of reflection for Canberrans and visitors alike.”

Cannabis would have been far more appropriate, and will attract far more visitors than another drain-blocking silver birch.

“It will also continue to contribute to the Arboretum being a repository of symbolic and endangered tree species from across the globe,” the Chief Minister concluded.

Endangered? Silver birch? I get the symbolic bit, but on what planet is a silver birch ‘endangered’?

The Netherlands PM visiting? People must be thinking about the Budget again …

When is Bono going to plant his tree?
Notice how trim the grass is but strangely for an arboretum, not one tree can be seen.

Andrew Brettargh - 20 minutes ago
Multi story and solar panel the top.. pays for itself.. View
Tom Adam - 3 hours ago
Why won’t they make it multi storey, instead of stealing parklands?? Not a wise investment.... View
Steve Herczeg - 7 hours ago
I've always wondered why there's a statue to celebrate single mothers at the top of the street. View
Property 36

Elroy Jones - 41 minutes ago
If you'd like to live in a rural setting then perhaps consider moving away from the city. View
Property 5

@The_RiotACT @The_RiotACT
Geocon has paid $24 million for a large city site near the Canberra Olympic Pool that it plans to develop into a mixed-use residential precinct https://t.co/zEhXCW7LBF (59 minutes ago)