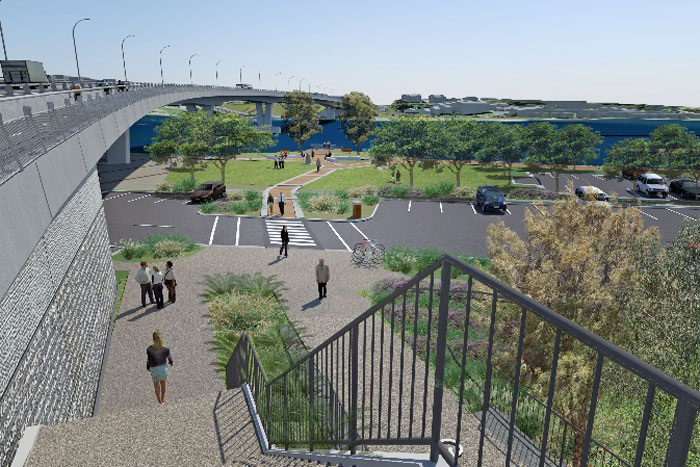 Despite bushfires and coronavirus, the Batemans Bay Bridge replacement project over the Clyde River continues to slowly but surely rise from the water.

NSW Roads and Maritime Services published a detailed update this week stating that the substructure and piers have been completed and that throughout the remainder of 2020, a total of 166 massive concrete bridge segments will begin making their way to the site under police escort. These will then be heaved into place via cranes and a barge.

The segments are being constructed at a facility six kilometres south of Mogo, which is now working 24 hours a day from Monday to Saturday to stay on schedule. In April, due to COVID-19 and fewer people being able to work together in the same building, the state government introduced new rules under the Environment Planning Assessment Order to allow construction sites to operate on weekends and public holidays.

Work on the new bridge began early last year and is due for completion in early 2023 as first planned.

The $274-million project is aimed at improving connections for commuters, holiday-makers and water users.

The current steel and concrete lifting bridge was completed in 1956 at a cost of 350,000 pounds, and has been carrying – and annoying – traffic over the Clyde River ever since.

It’s narrow and prone to creating bottlenecks, but the main issue is that twice a day when the ferry comes through the bridge opens and traffic grinds to a halt for about 10 minutes. That’s on a good day when the ‘vertical lift’ bridge doesn’t become stuck in the up position requiring action from emergency services.

Before 1956, the only way across was by ferry which could only take 28 cars every 15 minutes.

The replacement will be a double-carriageway, seamless ribbon of tarmac and concrete which towers 12 metres above the water, or high enough for yachts and ferries to easily pass underneath without impacting the traffic above. 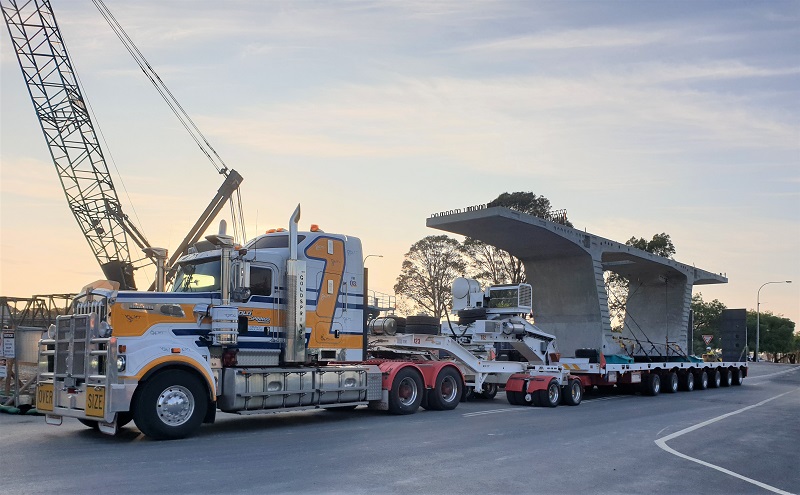 One of the bridge segments loaded up and ready for transport to the bridge.

In addition, the Eurobodalla Shire Council is in the process of upgrading the adjoining foreshore.

Following an ‘activation weekend’ in November last year, the Council drew up the ‘Waterfront Masterplan and Activation Strategy’.

“It provides a vision that sees the Clyde [River] waterfront working better for people and better for business,” said Deputy Mayor Rob Pollock.

The plan is open to online community feedback until 28 July.

The Kings and Princes Highway roundabouts at the Canberra-side entrance to Batemans Bay are both fully open now. Lights are a new addition to keep traffic flowing during peak times.

Also on the southern side, access to Wharf Road is still closed, but weather permitting, the Old Punt boat ramp will be reinstated in September.

Across the river at the future site of the renovated foreshore, there are investigations for a new floating pontoon.

Kim Thompson that'll get us to our new peninsula house in Narooma quicker!!!🤣

Alex Dejong which street is that, go straight to proper source NSW Roads

Catherine Sanders - 3 minutes ago
Micknali Weyman you going? View
Greg Pearce - 2 hours ago
Julia Cook, Hannah Pearce, Georgia Pearce & Leslie Cook for you know who.... View
Lucas Hayden - 6 hours ago
This is one of the best facilities ive ever seen...... I am not a "horse" person but I almost became one just walking around... View
News 57

Capital Retro - 12 minutes ago
"I think voting should be proportionate to the amount of tax you contribute." So that means all people who don't pay income t... View
Maya123 - 3 hours ago
So you work in this area of research and know more than those who are studding it? Science is evolving as more is learnt. Whe... View
Capital Retro - 4 hours ago
Climate change was happening when this old denier went to school - we studied it as a natural thing. In fact, it has been hap... View
Opinion 64

Jon Rooks - 26 minutes ago
From what I've seen, drivers going at excessive speeds generally are going so fast they demonstrably have no regard for speed... View
Community 33

Jeff Smith - 5 hours ago
Did you know the small Taylor public Primary school in Kambah is above capacity whilst the nearby combined Primary & High sch... View
Kathy Sepulveda - 7 hours ago
Jessie Nicho I'm a little late to this but I agree with you 100%. All the money is going into the Northside Public Schools an... View
Sport 2