Major Projects Canberra will deliver the next stage of light rail and other big pieces of infrastructure. Photo: George Tsotsos.

A new directorate will spearhead the delivery of significant infrastructure projects in the ACT from 1 July 2019.

It will be answerable to Chief Minister Andrew Barr, have an initial staff of about 140 but likely more as project delivery ramps up and could be based in Woden, although more scoping work needs to be done.

A Government spokesperson said it would be an expert infrastructure delivery team led by a Chief Projects Officer and reporting to the Head of Service and relevant Ministers.

“The Deputy Director-General of Transport Canberra, Duncan Edghill, will act in the Chief Projects Officer role while longer-term recruitment for this role is undertaken. The Chief Engineer will also play a key leadership role in the new body. It is likely there will be a series of roles advertised as some staff move between positions,” the spokesperson said.

It will be funded from existing resources, bringing together staff from Transport Canberra and City Services, Health and Treasury to centralise expertise across government to focus on planning, procurement and delivery.

The announcement comes as the Government prepares to release its 10-year ACT Infrastructure Plan in coming months, which will outline to the community and industry the city’s infrastructure priorities and emerging needs.

Chief Minister Andrew Barr said $2.8 billion was committed to infrastructure projects over the next four years,

“As Canberra grows toward a city of 500,000 people, we are committed to investing in infrastructure that supports our community’s prosperity, liveability and social inclusion,” he said.

“Over the past few years we have stepped up our investment in services the entire Canberra Region relies on, with a new hospital and health facilities, new and expanded local schools, and integrated public transport options including the first stage of light rail.” 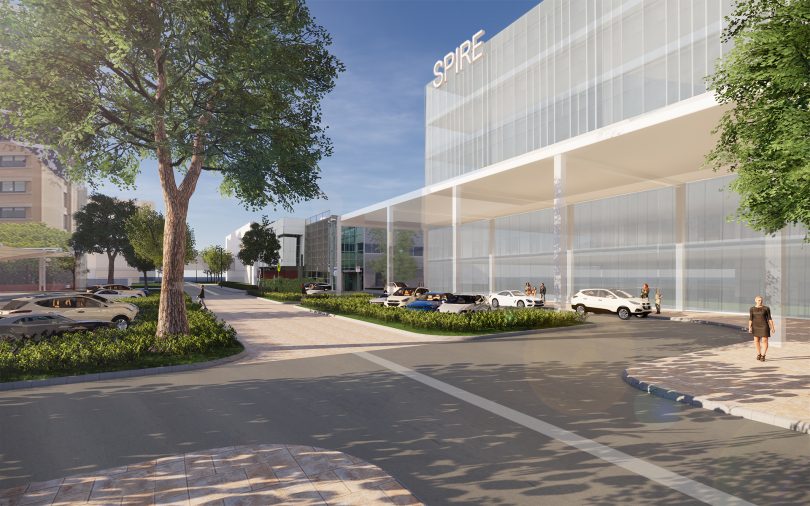 An artist’s impression of SPIRE, Canberra Hospital’s new surgical and emergency centre, expected to be completed in 2023-24.

Master Builders ACT, which has been calling for a long-term infrastructure plan for some time, welcomed the announcement of a dedicated delivery body for the Territory’s major projects.

CEO Michael Hopkins said the combination of it and the infrastructure plan would enable builders and contractors to gear up their businesses to be part of those major projects and hire more staff or train up existing employees to cope with the extra work.

It would also improve the ACT’s chances of attracting Federal Government funding for projects, by outlining its vision for the city and its needs.

With the current clamour for a new city stadium from the Raiders, Brumbies and some sections of the sporting community and media, a long-term plan would also prioritise Canberra’s needs and avoid piecemeal development.

“What a long-term infrastructure plan allows us to do is to map out the order and sequence that all of these priorities could be delivered in,” Mr Hopkins said.

“It’s not a question of a theatre or a stadium, over the long term we want a theatre and a stadium and light rail and a whole range of other infrastructure but until we move to a position where we’re planning our infrastructure over the longer term, we’ll otherwise end up in these sort of discussions around short-term priorities and that’s not the most effective way to deliver major infrastructure.”

Mr Hopkins called on the Government to release a draft infrastructure plan for public consultation so industry and the community could have input before it was finalised.

He said it was important that the social and community infrastructure the city needed was not forgotten.

“So it’s not only about the roads and bridges, and water pipes and sewer pipes but also the schools and the parks and open space and community facilities that are needed,” he said.

He also said the plan should also coordinate with the broader Canberra region on cross-border infrastructure.

“This is just part of Canberra maturing into a global city. We need to be planning our infrastructure over a much longer time frame, we need to be thinking about how we’re going to deliver these mega projects, because that’s what Canberra needs if it is to keep on growing at the rate that it has been over the past five or ten years,” Mr Hopkins said.

The fact that they are putting this ‘Directorate’ together AFTER building the Gunga tramline, means that they made a multitude of mistakes (that they hope will remain a secret for a long time).

Capital Retro - 9 hours ago
That means it will be a Labor/Green government forever and there are signs on this thread that that is no longer palatable. View
HiddenDragon - 12 hours ago
It's not minority government - it's a coalition, with Labor too often following the Greens down the rabbit hole, and the Gree... View
Acton - 14 hours ago
Do you remember Pitch n Putt at Woden? A popular community recreational area. Now derelict and set aside for apartments.... View
Property 12

Demolition of the old Strathgordon Court public housing complex in Lyons has begun, with the heavy machinery moving in on...
Food & Wine 0

White picket fences aren’t exactly de rigueur in Fyshwick. And it’s not the kind of spot you’d make a beeline...
*Results are based on activity within last 7 days