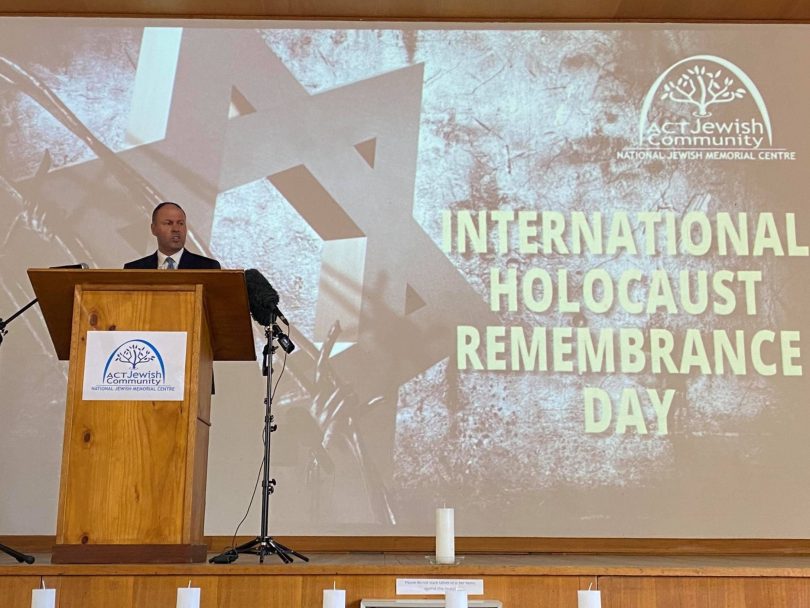 A new museum will bring the horrors of the Holocaust home later this year when construction starts on the Canberra Holocaust Museum and Education Centre on a site not far from our other national institutions.

The museum will be built at the current site of the National Jewish Memorial Centre (NJMC) in Forrest and will provide basic information about Jewish life in Europe before its barbaric destruction during World War II.

“The nature of the Holocaust will be illustrated, leading to an understanding of how democratic and law-based society, highlighted through the institutions of government in our nation’s capital, can prevent such tragedies.”

The announcement coincided with International Holocaust Remembrance Day on 27 January and came in the wake of a new report that revealed almost one in four Australians over 18 has “little to no knowledge” of the Holocaust. For millennials, it’s one in three.

The Holocaust (also known as the ‘Shoah’) was the genocide of European Jews during World War II. Between 1941 and 1945, Nazi Germany and its collaborators systematically murdered some six million Jews across German-occupied Europe, around two-thirds of the continent’s entire Jewish population.

The murders were carried out through violent riots, mass shootings, through labour in concentration camps, and in gas chambers and gas vans in German extermination camps.

During September last year, the Gandel Foundation – together with the Deakin University in Geelong – put a set of 70 questions to more than 3500 people across Australia.

The ‘Holocaust Awareness and Knowledge in Australia Survey’ is the largest poll of its type ever done, and reveals that almost one-quarter of Australian adults have little to no knowledge of the Holocaust. More than 70 per cent are not aware of Australia’s own connections to the Holocaust.

“We were hoping that we would be a little bit better, particularly among Millennials,” Gandel Foundation chairperson John Gandel said.

“A small number of people in Australia have ever visited a museum. We are hoping to use these findings to talk to state governments to better structure state education systems.” 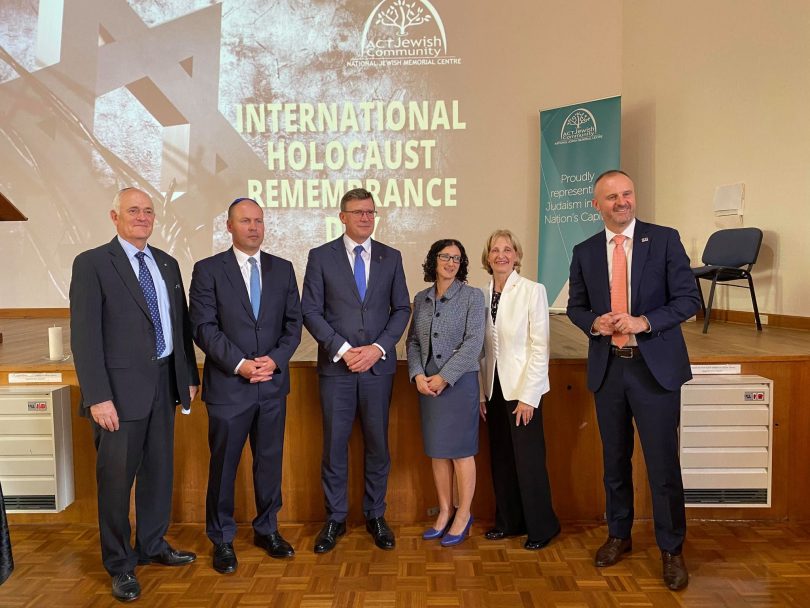 The new centre will be funded through the Community Development Grants program in line with Australia’s commitment to the International Holocaust Remembrance Alliance, which Australia joined in 2019.

Acting Minister for Education and Youth Stuart Robert announced the additional funding, bringing the Commonwealth’s financial commitment to the project to around $2 million.

“Today we remember those who lost their lives and reflect on the devastating impact of the Holocaust on the international Jewish community,” Minister Robert said.

“We owe it to those who died or lost loved ones to ensure this dark period of history is never forgotten and never repeated, and educating future generations has a key role to play in achieving this.

“I am pleased this funding will help get the Canberra Holocaust Museum and Education Centre off the ground and on its way to becoming a valuable resource to educate Australia’s youth.”

Since 2019, the Federal Government has committed more than $12 million to a suite of school-focused initiatives, said to “tackle all forms of discrimination and build social cohesion within schools”, including digital Holocaust education resources.

“Australians should be proud of our free and democratic society, and greater knowledge of the Holocaust will help to ensure such a tragedy is never repeated,” Minister Robert said.

“It is particularly appropriate to build a Holocaust museum in the nation’s capital alongside Australia’s democratic institutions and I would like to thank the ACT Government for their assistance in this important effort.”

first they took the unionists….

@11 million (not 6 million) died in the Holocaust. Let’s not forget them just because their religion was different.

This isn’t merely about educating Australian youth. Australia is a nation of migrants, and where our own school curriculum has always been high level on WW2, the horrors of the holocaust was always ‘European history’ sometimes glossed over. We need to help people to see the past, and this is a critical reminder that all humanity must learn from history – the holocaust and the purges, gulags and death camps around the world. We do not want to become like parts of the USA where some schools avoid books on the holocaust because they are “too graphic” (https://www.abc.net.au/news/2022-01-28/maus-holocaust-book-banned-in-tennessee-school-district/100787030

Gee Capital Retro you should engage a bit more with Australian history. Particularly the Frontiers War where Aborigines were starved, diseased and massacred en masse so the invaders could expand the British colony. Better still, familiarise yourself with the Massacre at Myell Creek, just one of the many atrocities committed against the Aborigines by the British invaders. There is quite a bit written about the massacres and particularly Myell Creek one of the most vile. And let’s not forget Robert Menzies and his grovelling to the Establishment. Thank God for Curtin!! Menzies spent so much time in England at the beginning of the war that he lost the confidence of the entire parliament and his prime-ministership. And then there’s Scotty! Don’t get me started on Aukus and his blokey comaraderie with Boris! And as for the Japanese, historians have been conflicted over Japanese intentions for decades. Maybe you could cite where you found Japanese intentions to ‘soften us up’ to invade. I could go on but space doesn’t permit.

Australian history appears to have been rewritten, Jack D.

Why would that be?

Rewritten by you I would suggest! What is the connection between the “Frontier Wars” and “Brisbane Line” Capital Retro? The Frontier Wars and the Brisbane Line in WWII are totally separate events but introduced into this conversation by you. There was never, ever a Brisbane Line, never ever and the Japanese have no connection to the Frontier Wars or this conversation thread. You’re trying to draw an analogy between two separate events to muddy the waters. This is revisionist history loved so much by John Howard and the Neocons! My guess is you’re a Young Lib. For an insight into the Young Libs in this progressive city take a look at their Twitter page. The word “misfits” come to mind. No wonder the Canberra Liberals have been in opposition in the ACT for nearly 22 years. And as to your comment doubting whether Australian’s worship Britain, just take a look at the demented lathering Australia’s Monarchists are currently in over the latest progressive steps for Australia to become a Republic. All this while the pale, boorish and conservative British PM Boris Johnson refuses to step down for hosting parties at the height of the pandemic. This includes him grovelling and apologising to Her Majesty claiming that he ‘deeply and bitterly” regrets having a party on the eve of Prince Phillips’ funeral. You Conservatives have no shame!

One aspect of Australia’s history that appears to be completely overlooked is the conflict between indigenous groups before colonisation.

As they gradually spread out from the early entry points in the north of the continent and population pressures came into play, as ancient climate changes occurred, and and as sea levels rose and fell, there must have been radical changes to the territories of various groups.

I wonder if there is anything in the archaeological records on this turbulent times.

A better comparison can be found in analysis of the (real) frontier wars that occurred in North America, here: http://www.armyupress.army.mil › military-history

Note that the American Indians were skilled in contemporary military concepts and they won some major battles. In comparison, the Australian aborigines only had crude weapons so they were always going to be defeated. The claimed 500 tribes (First Nations if you insist) were always engaged in “frontier wars” and were on an even footing. The victors usually massacred the vanquished. Having said that I do not want to ignore the undisputed facts that the (mainly) British colonists massacred indigenous people in their quest for developing the new country which became Australia. It should also be considered that the British were far less brutal than the Spanish, Dutch, Portuguese and German colonialists all over the world.

I’m not a “young liberal” either.

Look, I don’t oppose this, it can never be remembered too often. But the first priority that needs it own Canberra memorial is our 140 year frontier war. Which Reynolds, Ryan, and many others, have incontrovertibly established as true history, except that Howard and his protege Morrison would prefer to indulge in worship of Britain.

What frontiers are you talking about, Stephen? I know there was a strategy to create the “Brisbane Line” in case the Imperialist Japanese forces were able to invade Australia after softening us up with air raids and submarine attacks in which many civilians were killed.

And our ties with Britain go back a long way so why shouldn’t we continue that, although I don’t believe at any time in our history we have “worshipped” Britain but if we did I am sure you would be including Howard and Morrison anyhow.

Without wanting to take away from the suffering experienced by the Jewish people during the Holocaust this is a divisive and disgraceful waste of taxpayer’s money. This on top of the $500m to turn the War Memorial into a theme park. The pandering this government does! Why not a permanent monument to our Indigenous Australians? A monument in the spirit of reconciliation and a place for all Australians to reflect? A monument that tells the story of the violent dispossession of their lands, the massacres, the stolen generation, intergenerational trauma and the suffering and disadvantage they continue to experience right here in our society?

What are they pandering to?

There will never be “reconciliation” for some people.

Just two that come to mind and some of the Libs biggest lobbyists and donors are the Jewish lobby and weapons manufacturers!