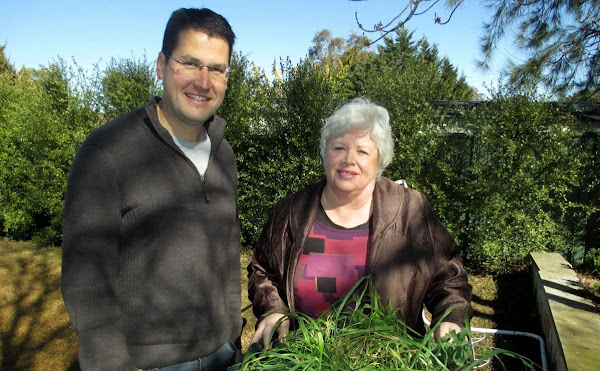 The cynical might take it as a sign the trashpak industry has been tardy in contributions, but the Liberals Zed Seselja has, not long before midnight, announced that if elected we shall be joining most of the rest of Australia in having green waste bins to lug away our garden detritus.

“Effective waste management and reduction is not only important in protecting our environment, it’s also a vital component of a well-managed city,” Mr Seselja said.

“That’s why a Canberra Liberals Government would give Canberra households a Green Bin for garden waste, as is provided in Queanbeyan, Sydney, and Wollongong.

“We would also provide a capital grant of $10 million for the construction of a garden waste processing facility.

“This initiative would save Canberra home owners up to $400 a year in green waste collection services.

Queanbeyan does the green bins at a far less cost then what has been quoted here. Also it is a 2 week cycle on the off week for the recycling pick ups. Great service and it also has a free green waste drop off for larger timber at no cost.

Ever heard of composting? Lugging garden clippings away is not in any way shape or form “green”.

I wish they’d force every house to have a composting bin, but they don’t.
We’re in a rental with a lawn, need to keep it tidy and just cut and take trimmings to Belconnen and dump it…..I’ve spread loads around the garden and buried some, but there’s too much. Also huge amounts of grass won’t compost well.
Surely a single truck collecting off the street is better than hundreds of car journeys going to the same place…..can’t they show it as an emissions reduction?

No green bins for the Motorist Party, the current system works just fine. I am sure all the residents that live in units and apartments would be pleased to contribute some of their taxes to green bins.

Can we put our green waste in free plastic bags?

Pretty sure all I would use it for is rose bush clippings (’cause they are spiky!) and persistent weeds I don’t want reseeding in my compost.

So where are they planning on building the rose and weed processing plant?

What are you smoking?

Careful though. Cold homeless kids might find the bin warm and move in. There goes the area!

Green bins were actually costed by the Hyder report at $19 million dollars. Shared over the 148,000 houses in Canberra that’s an extra $128 each on all of our rates. Thanks Zed!

A consultant found the outcome his employer wanted? Gosh that’s useful for debate!

A green waste bin would stop me from throwing my plant trimmings into my recycling bin..And before you get on your high horses, if we recycled correctly, many people would be out of a job, im just keeping them employed.

You know you should use the waste bin for that.

A green waste bin would stop me from throwing my plant trimmings into my recycling bin..And before you get on your high horses, if we recycled correctly, many people would be out of a job, im just keeping them employed.

I like the idea of a green bin, but for the effort of sending around another garbage truck and deploying thousands of plastic bins, I’d prefer it if it did all organic waste, not just garden waste.
Corbell claims that we currently divert 90% of garden waste at a cost of $5/tonne, so I’m not seeing the unmet need for a dedicated green bin, which he also claims will cost $50/tonne.

I’m also not convinced that Labor’s plan to separate organic waste from the general waste stream will be as cheap to run as they say, nor can it possibly end up with a quality, un-contaminated product at the end.

At a running cost of $5.5 million a year for the Liberals plan, and roughly 100k households in ACT, that will cost us each about $55/household. What percentage of households would actually use the bins?
I compost all of my own organic waste, and I would assume many other gardeners would too as it’s a valuable resource.
Subtract the apartments, townhouses and houses that already have a commercial gardener drop off green waste at one of the existing facilities and you could be down to as low as 25% of households, which would then run a cost of $420/active household/year (more if the $5.5million figure assumes an unachievable quantity of finished compost sold to offset the cost) – we’d be better off just paying the quoted $400/year for private green waste collection.

Now if it was the same cost for a service that collected ALL organic waste, every household (minus those that already compost themselves) plus restaurants, supermarkets etc. could divert food waste, soiled paper and other organics in addition to garden waste and we could potentially divert about 50% or more of our current waste stream, which could save money in reduced general waste collection/disposal too.

Will this result in a third 27 tonne truck plying every street in Canberra each week?

Ever heard of composting? Lugging garden clippings away is not in any way shape or form “green”.

Every heard of the clippings you cant compost (such as larger larger branches, diseased plants etc) and the excess of green waste that some of us can’t use?

I pay for the removal of this stuff now. For the rates I pay I would like to see something useful to me – not just street art.

jwinston - 14 minutes ago
Yet again more meaningless legislation that less than 1% of the care about. Fix the hospitals and education before implementi... View
nobody - 1 hour ago
Colonisation turned this continent into the great country it is today. If colonisation had not taken place, then MLA Paterson... View
Opinion 15

gooterz - 24 minutes ago
I'm open to a pyramid league. View
Eddie Majcic - 40 minutes ago
Yes. We need the AIS precinct better utilised. Open it up more to the public get more people using it. It's a great facility... View
Heavs - 57 minutes ago
I actually like what the Tasmanian Government just did. They partnered up with Hockey and bought a rolling bunch of events to... View
News 2

@the_riotact @The_RiotACT
Ratepayers and residents in 124 local government areas across #NSW go to the #polls on Saturday, 4 December. Here's a rundown on what you need to know https://t.co/cZ78vqVrLb (14 minutes ago)