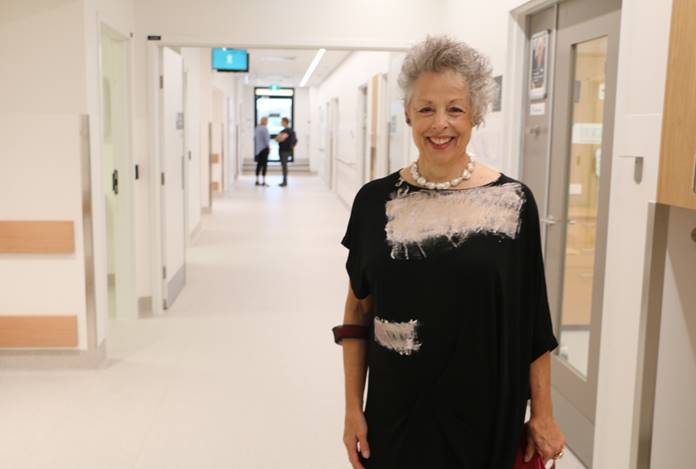 Sue Gascoigne stayed at the specialised cancer ward for five weeks during her relapse. Photo: Supplied.

When Sue Gascoigne was diagnosed with acute myeloid leukaemia in 2014, she was forced to spend a month in isolation at the Canberra Hospital.

Sue was so immuno-compromised she was confined to a positive-pressure room which sucks airborne microorganisms out. The loneliness was excruciating, which is why Sue was ecstatic to be invited to the opening of the new cancer ward earlier this year after her recovery.

For future patients who need a positive-pressure environment, being isolated in a ward rather than a single room is a game-changer as it offers more comforts and freedoms for patients.

Unfortunately, Sue became more familiar with the new ward than she would have liked when her cancer relapsed this year and she was forced to spend a further five weeks in the new ward.

“Apart from the fact that everything was brand-spanking new, the fact that the entire ward is positive pressured means that it gives people the ability to walk around because many people’s immune systems are shot to pieces and they have to be in a positive-pressure environment,” she said.

“The old ward meant you were completely isolated in your room but you can now come out and exercise and see other patients and build up a rapport if they are well enough.

“Getting to see other people and know you are not the only one isolated in a single room is so important psychologically.”

With visitor restrictions coming into place throughout the pandemic, limiting the number of people patients could see at a time, or on a given day, meant that being able to interact with more hospital staff and patients became more important, Sue said.

Construction of the second specialised cancer ward at Canberra Hospital is expected to be completed in mid-2021. Photo: File.

“The restrictions on visitors when I was there more recently were as strict as they had to be so being able to see other people apart from the amazing nursing and medical staff really meant a great deal – to be able to give a wave to someone or even just say hello.

“The other thing is that there is a lounge area and so it is now possible for patients to walk to this slightly more open space and there is a dining table where you can sit and eat your meal in a different place rather than constantly being in your room.

“You can also walk and look out at different views – in the new ward 14A you get a view of the Brindabellas rather than just what you get from your room.”

Following the positive reviews from patients like Sue, ACT Health has pushed ahead with the second planned cancer and haematology ward – 14B.

The construction of the ward was initially put on hold during the pandemic and became a designated surge capacity area in case the situation in Canberra took a turn for the worse.

The upgrades will also connect the cancer wing in Building 3 with the Canberra Region Cancer Centre to improve movement between the wards and centre.

The refurbishment of both wards will cost $19 million. Ward 14B is expected to be operational in mid-2021.