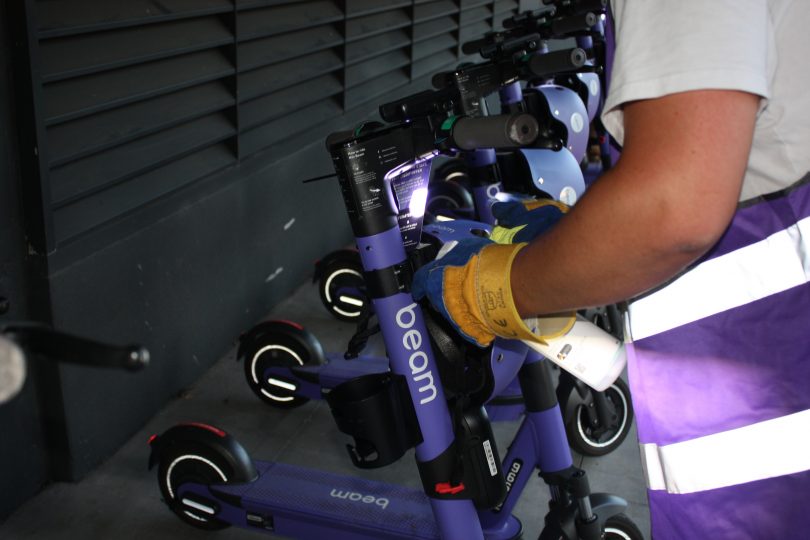 They work in the dead of night, fishing e-scooters out of lakes, picking them up off the kerb, swapping out dead batteries, sanitising and safety checking the fleet that Canberrans have come to love (or loathe).

More than 100 people work as part of the ground crews for Beam and Neuron e-scooters, servicing the purple or orange scooters now gracing our streets.

Some Canberrans complain the scooters have been abandoned all over the city, are unsightly, dumped in random places and are an eyesore.

What they may not know is that there are teams of ground-crews working tirelessly to keep the scooters sanitised, upright, charged and ‘redistributed’ to more central locations.

The point of this mode of micro transport is that the e-scooters can be parked wherever, with some restrictions, of course. The rider, therefore, can simply finish their journey, park safely, and then the same scooter can be picked up by another user, and it continues on its merry way. 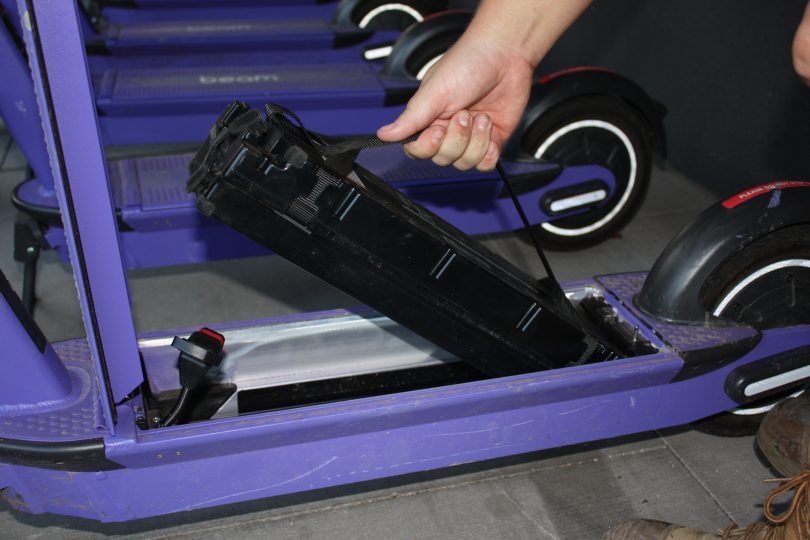 This, of course, doesn’t always work in real life – and this is where the magic of the ground crew comes in.

Oscar, a member of Beam’s scooter crew calls it “rebalancing”.

What this entails, he says, is moving the scooters towards more central locations so they are more likely to be used. They are picked up from more suburban locations, usually overnight. His shifts generally go from midnight to 8:00 am, so this is probably why you haven’t spotted the team yet.

Oscar has been in the job for a couple of months and says the scooters do tend to turn up in some pretty weird locations. One of these, somewhat unsurprisingly, is Lake Burley Griffin.

Khoa Pham, General Manager for Australia and New Zealand of Beam Mobility, says Beam is particularly keen to “fish” the scooters out of the lake because every scooter in the lake means not only pollution and an eyesore for the city and its residents, but a scooter that cannot be ridden. 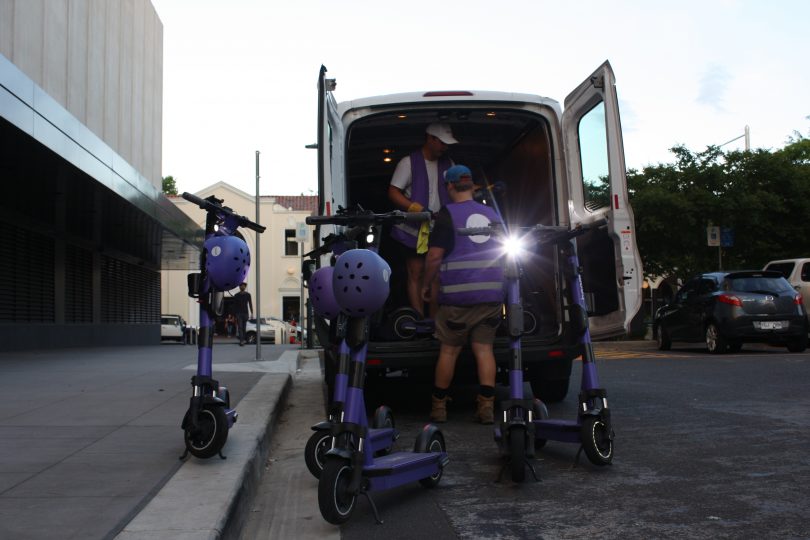 Scooters are relocated to locations where they will be used most.

Another place e-scooters often end up is inside ANU residences. But, the ground crew say they have a sneaky system to rectify such situations. They simply set the alarm off (loudly) at 6:00 am and wait for the scooter to appear outside – which it usually does, with surprising speed!

Oscar and his team have also discovered scooters as far south as Tuggeranong, which he suspects is due to them being taken there by car.

Mr Pham says these are the kind of “teething problems” experienced with the introduction of the scooters into any new city.

He says that sometimes people are worried they need to keep their “own” scooter to ensure they can always make whatever trip required. But, this is not necessary, and he urges riders to leave them in locations where others can then pick them up.

According to Neuron’s Canberra Regional Manager, Richard Hannah, the ground crew work 24 hours a day, prioritising reports of bad parking, and their topple detection technology alerts the ground team if they are on their side, so they will head straight over to rectify the issue.

Beam also runs safety courses to teach riders how to stay safe, get the most out of the e-scooters and, for everyone’s benefit, park safely.

People falling off these death traps are presenting to ED at TCH by the dozen and we mug ratepayers are not only funding the treatment of their self-inflicted injuries but we are being displaced from the queue for treatments we need which are part of growing old.

Which political party approved these devices and who voted for them?

This service seems very labour intensive. I can’t see how it will make any money for the investors unless of course the ACT government has given them concessions and freebies like Ikea got.

The Footsal pad was there for many years. In fact, it had diverse uses including being the forecourt for a shipping container storage yard after Andrew Barr created an industrial hub there.

They are a gimmick and will 66 soon vanish like a Footsal pad.

Considering the lonely scooter I see every day abandoned all over the city, I reckon it would take days, not hours, to find them all!

Many of those riders are inexperienced and I find myself continuously worried for the safety of my little kids when we should be safely walking on footpaths. You better have a good liability insurance as quite a few people is going to get hurt.

Canberras electric is not 100% renewable….it was 100% renewable one afternoon a month ago for 2hours……The solar doesnt produce after the sun goes down, the wind turbines dont generate when their is no wind….45% of electric is still of the interstate connector from victorias coal fired power stations

Incorrect: “100% of the electricity paid for in the ACT is renewable.”

Correct: “100% of the electricity ordered for use in the ACT is renewable.”

And which crew is responsible for the scooters parked in the middle of narrow footpaths, or on bikepaths? At some point a scooter must become litter.

I saw batteries being replaced at 10AM in Braddon the other morning.

“Another place e-scooters often end up is inside ANU residences. But, the ground crew say they have a sneaky system to rectify such situations. They simply set the alarm off (loudly) at 6:00 am and wait for the scooter to appear outside – which it usually does, with surprising speed!”

So there’s a crew of 100 driving around Canberra in diesel powered vans collecting/ replacing batteries charged with coal and gas generated electricity for 1500 scooters made in China at coal powered factories???

Chris Van Aaken hahaha, what absolute rubbish, I will educate you, The ACT government uses tax payers money to fund renewable farms over a 1000 kms away from Canberra, we don’t have renewable electricity,
Canberra’s electricity come from the national grid, which is 80% coal and gas generated, you and the 5 people that liked your comment have been brainwashed by Shane Rattenbury

Jorge Gatica if you think the audited claims that the ACT is running on renewable energy is false, perhaps you should provide your sources.

Of course when the power grid is interconnected you can play funny word games. The reality is the power you take out of the grid needs to be put in at some point, as long as the ACT wholesalers are funding enough renewable sources to add power to the grid (anywhere in the grid) the power people in the ACT are paying for is 100% renewable.

But you know that, you’ve just got an axe to grind for done reason.

Mal Briggs there’s no axe to grind, the source is called reality, if Canberra is powered by 100% renewables then there should be renewable electricity power stations within our borders feeding power to every home and or building in Canberra and not being connected to the national grid, at the moment our power comes from the national grid only 5% of renewable electricity is generated within our borders, and that’s a fact the rest is fantasy, but you can believe in the later

Jorge Gatica ok, let’s rephrase it shall we?
100% of the electricity paid for in the ACT is renewable.

That power fed into the grid, funded by the wholesaler, and therefore the consumer, is 100% renewable.

We can also phrase it this way which is more credible,
The ACT government funds solar and wind farms in other states of Australia then it tells the population that they are getting renewable energy, but in fact the people who are really benefiting from this renewable energy is mainly the cities and towns closest to where the renewable energy is been fed into the grid, so in real terms Canberrans are paying for something that they are not getting and if you believe otherwise you must live with the fairies at the bottom of the garden

i think i get her point, something isnt perfect and theres some way its technically “not green” so bugger it lets all go back to the steam engine, to hell with all the progress we have made

its basically the same argument planet of the humans presents, lets take some extreme example (in the film some solar farm filmed 10 years ago) and here, because we share a grid, so lets throw it all away and burn the earth because we arent perfect instantly, all progress obviously isnt progress because we haven’t instantly achieved the thing we set out to do

and rome was built in a day

Jorge Gatica i suppose you’re one of those people who thinks that road levies pay for roads. You know it all goes into the same bucket of money used for everything else. So it is with electricity generation. If the ACT needs a billion jiggawatts then they will contract renewable sources to produce a billion jiggawatts. You won’t get the exact same electrons that we produce from renewables but *someone* gets those electrons. The same benefits accrue even if some of the electrons consumed by the ACT come from filthy dirty coal.