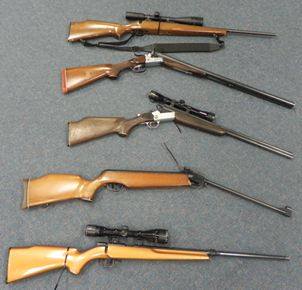 During the inspection at the Kaleen residence police seized five firearms and are now investigating the legality of their registration. These included a 12-gauge side by side double barrel shotgun, a .22 calibre and 410 gauge combination under and over rifle and shotgun, a .177 calibre pellet rifle, a bolt action .22 calibre rifle, and a bolt action .243 calibre rifle (pictured).

During the inspection at Kaleen police also located and seized three rifles and one shotgun that were not stored in accordance with the Firearms Act 1996.

During the search warrant in Forde, police seized a canister of CS gas (tear gas), a magazine for a .22 rifle and a small quantify of a substance believed to be an illicit drug.
Investigations are ongoing.

ACT Policing urges anyone with information regarding illegal firearms to contact Crime Stoppers on 1800 333 000, or via the Crime Stoppers website on www.act.crimestoppers.com.au. Information can be provided anonymously.

Louise O'Donnell - 43 minutes ago
Yes that is the repository, or storage area. The files (paper, digital, and so forth) need to be stored somewhere safe and en... View
Lori J Tas - 8 hours ago
Bet the ALP wont do anything either 😒 View
Geoff Richardson - 8 hours ago
Maybe instead of wasting half a billion taxpayer dollars on an unwanted upgrade to the war memorial, those funds could be bet... View
Food & Wine 11

Melissa Wells - 5 hours ago
Ben was one of my teachers at Melba High in 2004/5. Such a genuine and caring teacher! Had no idea about this, but when is a... View
Sophie Stoddard - 9 hours ago
Taught me maths for a bit. 👌🏻👌🏻 View
Rory Wadwell - 9 hours ago
Stephen Wadwell you were very fortunate to have him as a mentor for your refereeing. View
News 67

Kimmy Hunter - 5 hours ago
Crystal Darmody if you live in Canberra they don’t accept you... View
News 61

Shirley Walsh - 6 hours ago
Congratulations Ricky View
Mario Vozella - 7 hours ago
Nice work mate 👍 View
Katrina Garrety - 7 hours ago
A very big congratulations to u Rick and ofcourse Kaylie too ..u no how the saying goes ..behind every great man is an even g... View
Opinion 11

HiddenDragon - 8 hours ago
So the light rail terminus (and the pretty lights in the trees) haven't done the trick with all that "activation" and "enlive... View
JC - 8 hours ago
60m a year (cost of lightrail) doesn’t go that far. Some seem to think it’s a magic pudding. View
May Mac - 9 hours ago
If the Sydney and Melbourne Buildings could be constructed in separately owned sections which created the beautiful buildings... View
Community 44

Shane McMinn - 9 hours ago
Quangers, or the Socialist Republic Of Queanbo.. View
MERC600 - 10 hours ago
Quangers has it all over Canberra these days. No graffiti , grass mowed and no rubbish floating about. The other article on t... View
Community 4

chewy14 - 11 hours ago
JS9, I agree and it's this sort of rent seeking that does a disservice to what they are trying to achieve. It's actually also... View
show more show less
*Results are based on activity within last 7 days

@The_RiotACT @The_RiotACT
Alan Tse went from a career in a heavy drinking corporate culture to co-founding a Canberra startup that provides beverage options for those who choose not to drink alcohol https://t.co/RUUOzWV8eB (6 hours ago)