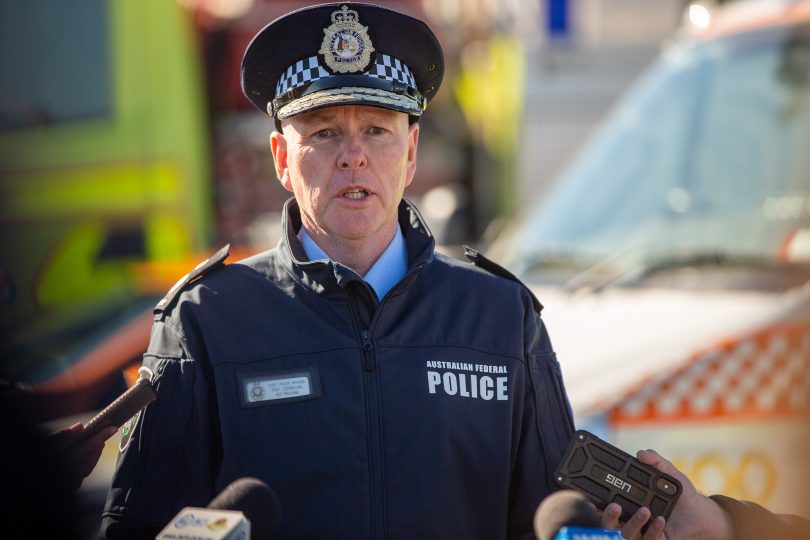 Despite repeated warnings from ACT Policing and a frustrated Chief Minister, 400 Canberra drivers were stopped at the border over the weekend and 100 infringements were issued for traffic offences.

After speaking to officers, 46 drivers chose to turn around and head home when they understood that their travel was not essential, ACT Policing said. No fines were issued, despite one vehicle towing a caravan.

Police were called to several gatherings at parks and residences, including three men working on a car in Forde. The men were cooperative and moved on without incident after officers spoke to those involved about social distancing requirements.

Half of the traffic infringements issued over the long weekend were for speeding but offences also included driving unregistered vehicles, mobile phone use and driving while disqualified, ACT Policing said.

Police were mostly happy with how Canberrans conducted themselves over the long weekend despite some residents not getting the message about social distancing, Chief Police Officer for the ACT Ray Johnson said.

“Before the long weekend, I said this would be an Easter like no other, with Canberrans encouraged to stay home, not go interstate or to family gatherings, and most people heeded that message,” CPO Johnson said.

“That said, we still saw many drivers on the roads unnecessarily, people attending large gatherings, and people not practising social distancing directions in places like the area around Lake Burley Griffin.

“I thank the Canberrans who did the right thing this weekend but we have to come together as a community. We do not want the actions of a few to affect future measures to help stop the spread of COVID-19.”

While COVID-19 is a challenging time for all of us, I urge the Canberra community to please stay home to help stop the spread. We all need to work together and do our part to get through this. #stayhome #staysafe #inthistogether #COVID19

Easter Monday was particularly bad for high range speeding offences, ACT Policing said, after a 19-year old P-plater was caught driving at 167km/h in a 100km/h zone on the Majura Parkway.

Mr Barr said it was disappointing some Canberrans did not listen to the repeated warnings on non-essential travel but lauded the majority of residents for following physical distancing and isolation measures.

“Even though it was disappointing a small number of people did not heed warnings, I want to say thank you to the Canberrans who have done the right thing and stayed at home,” he said on Monday (13 April).

In NSW, police have charged 27 people under the Public Health Act and over 260 people with COVID-19 related infringement notices – which carries a $1,000 fine – since Friday (10 April).

This included a group of four men and a woman in their early 20s in Nowra for a small party at a hotel on Kinghorne Street after one of them booked the room under the guise of work but invited the other four over to drink, NSW Police said.

In the ACT, the police response to COVID-19 remains at stage one meaning officers will seek to educate people before providing warnings and fines.

For any questions relating to the ACT Government’s COVID-19 response, including potential ACT Policing involvement, call the helpline on 6207 7244 between 8:00 am and 8:00 pm, seven days a week.

Only contact police on 131 444 for police assistance, or Triple Zero (000) for life-threatening emergencies.

Rick Robins - 34 minutes ago
Laurie Berry it's all ok, Canberra has a tram instead of basic services! View
Earthdog - 4 hours ago
Michael and Mark, depends if it was a Truffula tree because not everyone needs a thneed. Although it is very handy at Canberr... View
News 188

Terri Lee Gill - 54 minutes ago
Get over it you have had ample warnings and if you can’t control the pedal under your foot to abide by the law not only in... View
Richard Vlazlovski - 1 hour ago
Heading toward the social credit system just like in china . View
Chris Jones - 2 hours ago
Knowing our government they’d assess your home as part of your income to fine us more View
Food & Wine 2

“You are not welcome”, regional NSW ramps up plea for Canberrans to stay away over Easter