No exemption for the private school rowers – and still they went on – NO WAIT – NCA cocks it up again! 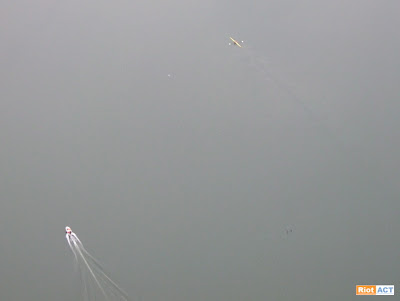 Earlier in the week we had widespread complaints about the independent schools rowing regatta and its appalling organisation which created widespread conflict between the well heeled rowers parents and every other user of the lake shore.

A lot of you found this curious at the time as the lake was supposed to be closed to public use due to health concerns around blue green algae.

There was some mumbling about exemptions, which is curious as a permit rarely mitigates health risks.

On 666 this morning the NCA Chief Executive, Gary Rake, has put the lie to this, he even went so far as to go down to the lake on Sunday morning to beg them to not put the kids in the water.

Independent schools and rowing officials are bunkering down and refusing to comment.

UPDATE: The ABC news report on this is now online:

“We’ve never in the history of events of water events on Lake Burley Griffin had an event organiser that’s refused, and ignored safety advice.”

If you’re a participant who got sick (or one of their parents) we’d love to hear from you.

ANOTHER UPDATE: Well I’ve heard now of at least one girl reportedly developing a nasty rash on the arm since the weekend.

IMPORTANT UPDATE: The Canberra Times now brings word that the schools did in fact have permission from the NCA to go ahead, permission the CEO Gary Rake was apparently ignorant of when he went down to the lakeside to wave his arms and then splash himself across the media.

The NCA verified yesterday that an email had been sent by a junior staff member to the Canberra Grammar School, which had been nominated as the convener of this year’s regatta, reiterating that it had issued primary- and secondary-level warnings in relation to algae in the lake and advising against any swimming or boating activities. But the email also said that the regatta could proceed based on the precautions that would be in place, including providing fresh water to douse any students who became immersed, and having medical staff on hand. This was forwarded to the rowing association, and referred to in advice given to other schools.

So on that basis I’d like to apologise to the rowers and schools involved.

129 Responses to No exemption for the private school rowers – and still they went on – NO WAIT – NCA cocks it up again!
Filter
Showing only Website comments

Wallies wallys I’m perplexed about apostrophes. Does that mean I’m suffering from apoplexy

This post is a beat up. Personally I don’t care how many private school wally’s end up cyano-bacterialed in the lake. The more the merrier as far as i’m concerned. And if a few cyclists have to push past a load of toffee-nosed mums, unimpressed about the evidence revealed in their bike shorts, why should we care?

Given the recent incidents in Sydney, we can’t even say this thread has jumped the shark…

I have no problem with people heaping sh!t on those cyclists who what to carry on like knob-ends by insisting that they have some god-given right to ride wherever they please, irrespective of the conditions.

A bit like the knob-ends who insist on holding a regatta irrespective of the condidtions.

Sorry johnboy. Only meant as a joke…

Possibly the quickest way into moderation is to bark impersonal orders at me.

Let’s all get back on topic shall we?

On the face of it … it seems a bloke who is “acting” chief executive of the NCA wanted to big-note himself on this issue to prove himself worthy of the job.

But he didn’t bother to take into account the actions of those pesky “junior staff”.

Didn’t work out so well for him.

On the face of it … it seems a bloke who is “acting” chief executive of the NCA wanted to big-note himself on this issue to prove himself worthy of the job.

But he didn’t bother to take into account the actions of those pesky “junior staff”.

Didn’t work out so well for him.

When the facts change I change my mind. What do you do?

(With apologies to Keynes)

Get angry and refuse to acknowledge the facts.

This is kinda like kids taking drugs; it they’re gonna do it, you at least want them to be safe.

I still think they should not have been on the lake.

even though they were advised that they could go ahead, there was bluegreen algae level 1 & 2 warnings in place.

I would rather my kids didn’t get sick by doing something that i could have prevented, and sluicing down a kid that has become immersed won’t help the poor little buggers that have swallowed the water…

This is kinda like kids taking drugs; it they’re gonna do it, you at least want them to be safe.

I still think they should not have been on the lake.

Now I feel bad too …….. parents/coordinators not so irresponsible after all.

***So on that basis I’d like to apologise to the rowers and schools involved.***

Backflips are great achievements when executed with grace and aplomb.