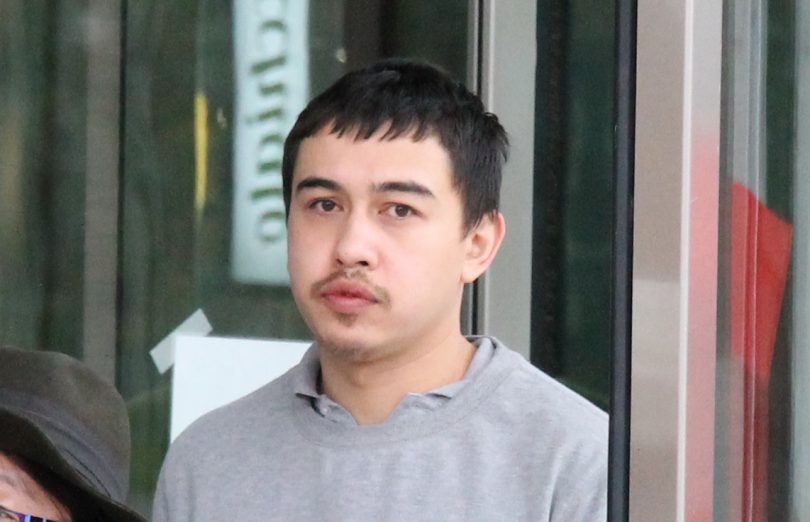 Barry Michael McDermott leaves the ACT Courts in grey clothes and thongs after being released from jail on Tuesday. Photo: Albert McKnight.

As a woman was brutally choked until she blacked out, her attacker told her: “No one can hear you.”

Once she finally made it outside the house where the attack took place and two nearby people attempted to help her, Barry Michael McDermott assaulted them as well, punching one in the face and biting the other.

McDermott, 30, was arrested and spent almost eight months in jail, but has avoided being locked up longer after his sentencing in the ACT Magistrates Court on Tuesday (5 May).

Special Magistrate Jane Campbell said in September 2020 he had punched the woman in the head and continued to hit her when she fell to the ground before putting his hands around her throat and squeezing, causing her to lose consciousness.

When they were outside, he lifted and threw her headfirst into the ground in a spear tackle, then hit her with a metal pole.

Magistrate Campbell said the two people nearby, whom she described as “good Samaritans”, tried to help and rescue the woman, but McDermott punched one in the face and smashed their phone.

While the other person held McDermott to the ground as they waited for the police to arrive, McDermott bit him.

Magistrate Campbell said choking had the potential to kill someone, but not straight away; for example, it could cause them to suffer a stroke six months later.

“It is a physical demonstration of somebody’s power,” she said.

She also commented on how he had spear tackled the woman.

“There’s a reason that type of conduct is not allowed on the sports field,” she told him.

Also, he disputed the facts in one of the counts of assault, claiming he had only slapped the woman.

But in a hearing earlier this year, Magistrate Campbell found him guilty of the choking charges and that he had punched the woman, not slapped her.

The woman wrote a statement for his sentencing on Tuesday detailing how her life had been affected, saying she had been left with a scar that was a “constant reminder” of the attack.

She said she still had flashbacks of McDermott on top of her, instilling the fear that no one could hear her.

“You have destroyed my confidence and self-image,” she said.

“I struggle to see myself as a person, rather a piece of meat that can be thrown around.”

The woman said she still could not understand “why you hurt me in this vile way”.

McDermott’s lawyer, Gabrielle Knight of Andrew Byrnes Law Group, said her client had spent seven months and 18 days in jail after his arrest, which was a significant length of time for a first-time offender.

She said since her client had been in custody, he had developed a willingness to better himself and asked that he be released from jail on an intensive corrections order to allow him to integrate into the community.

“He’s let his mother down and he knows this,” Ms Knight said.

When it came to sentencing, Magistrate Campbell took into account the time McDermott had already spent in jail for the assaults and that he was a first offender.

“This offending was so serious I was expecting to see someone who had been before the courts before, but you haven’t,” she told him.

She sentenced him to about 18 months’ jail but suspended the remainder of his sentence for a 12-month good behaviour order so he could be released from custody.

Wearing a grey jumper, shirt and pants, as well as socks and thongs, McDermott walked from the ACT Courts.

“……….to allow him to integrate into the community.”

Which community would that be?