No PM’s XI next cricket season? 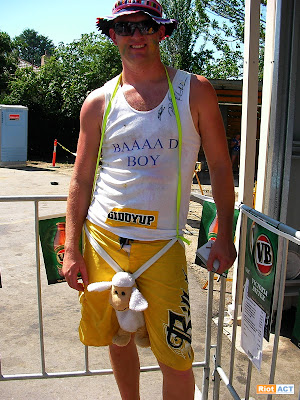 Cricket Australia has this day announced the schedule of international cricket games for 2009-10.

Ominously there is no mention of a PM’s XI game, or any other game here in Canberra.

No day of drinking in the sun?

UPDATE: A week later Cricket Australia have replied with a somewhat, but not entirely reassuring message:

21 Responses to No PM’s XI next cricket season?
Filter
Showing only Website comments

if there is a match… but this new press looks better.

Actually, I know a hell of a lot about cricket.

fab, now we know who to ask to explain that lbw rule some time! ; )

Actually, I know a hell of a lot about cricket.

I’ll be extremely disappointed if the match is cancelled.

Since when has going to the cricket had anything to do with actually watching the game?

yahoos who know nothing about cricket is what it is all about. Drinking yourselves stupid is a god given right at the PM’s XI… abusing foreigners, only if you don’t get caught.

ahh, those misty eyed days of a cricket tragic pm… but i’m with thumper – rekkun they’ll treat it differently and we’ll get a revised schedule at some soon future time with it included.

if not, storm the parliament and demand it!

lol..I remember this character with the ‘sheep’. WHen he saw me with my NZ flag. Well..nuff said..lol

When my husband worked for Lexmark he was called into the PMs XI to fix a printer at the PMs tent. Who brings a printer along to a cricket game? Anyway he had a great day “fixing the printer” (watching cricket).

It would be a shame if Krudd takes away this tradition from Canberrans.

You must go to different matches than I do, I’ve always had great times at cricket matches in Canberra and in Aus in general.

One of the best natured matches I’ve been to was India vs Sri Lanka at Manuka oval, despite there being a large body of both Tamil and Sri Lankan’s in the crowd, (to say nothing 9of Indians!)

Are you sure it wasn’t soccer matches you’ve been watching?

If I were so small I could fit into a sheep that size, I wouldn’t advertise it.

Phoar – whose that in the photo? Caption please!

CA got wind of the impending ‘masterplan’ for Manuka.

It’s *normally* included in this announcement

Yeah, I know. But I clutching at any straw I can find 😉

Since when has going to the cricket had anything to do with actually watching the game?

It’s *normally* included in this announcement.

Ah, I also note that tour matches aren’t included so I suspect that the PMs match will be treated as a tour match and not an international.

So I reckon it’ll still be on.

Quick, we need a new purpose built stadium for cricket!

Tara Maree McInnes - 46 minutes ago
Glad I got stuff yesterday View
Kriso Hadskini - 13 hours ago
I took one look at the q at Coles this morning and walked out the other way...rather go without. View
Sue Skinner - 15 hours ago
Fair enough, but people still too close together at the meat sections in my local Woolies. I ended up leaving as people kept... View
News 49

Mary Beveridge - 1 hour ago
Many children across the world missed many years of schooling due to wars, it will be possible for most of them to catch up a... View
Jessica Kate - 1 hour ago
Anni Ingram 😂 hope you’re all good love xx View
Nicole Thomson - 3 hours ago
Unfortunately my grade 1 child, unsurprisingly, is not so great at self directed learning.... so al those materials and games... View
News 16

Paul Dowden - 3 hours ago
Laurence Kain I was there. View
Best of Canberra 3

David Soininen - 4 hours ago
They should be working Monday to Friday like the old days . View
John Hynes - 12 hours ago
MB Miyagi or throw matches for bookies like India has done View
MB Miyagi - 12 hours ago
John Hynes or spending more than they are allowed to like Carlton did 😃 View
News 34

John Dale - 12 hours ago
Yep, great idea. I don’t see even one appeal coming out of this. Not one. No, seriously. View
Food & Wine 2

Chris Jones - 15 hours ago
Parenting is one thing. Teaching at the same time and also trying to do your own job so you can get paid and actually provide... View
Food & Wine 4

Isabella Goyne - 17 hours ago
Sweet this place *is* still around. I’ve driven past it but it always seems to be closed. View
show more show less
*Results are based on activity within last 7 days

Baking sourdough bread has proved to be the perfect starter for chef Frankie Bodel, who lost her job last week....
News 46