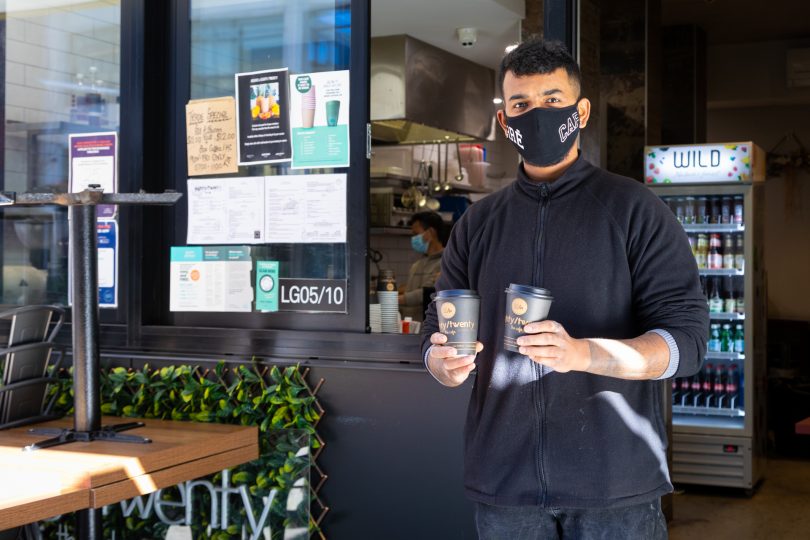 For many Canberra businesses, the last few months haven’t been the ‘v-shaped’ economic recovery they’d hoped for. Photo: Michelle Kroll.

The Opposition says it’s high time the ACT Government released an updated economic recovery plan to show how the Territory will respond to the challenges presented by Omicron and future waves of COVID-19.

OTIS Dining Hall owner Damian Brabender said he and other hospitality businesses haven’t seen any evidence of this recovery yet.

Instead, the holiday season was marked by low levels of consumer confidence, staffing shortages and uncertainty.

What Mr Brabender says is missing is targeted messaging about what is safe. He’s worried consumers are now being asked to make too many risk assessments themselves, leading them to stay home and not spend.

Likewise, he’s understanding of general feelings of anxiety, fatigue and uncertainty circling in the population. 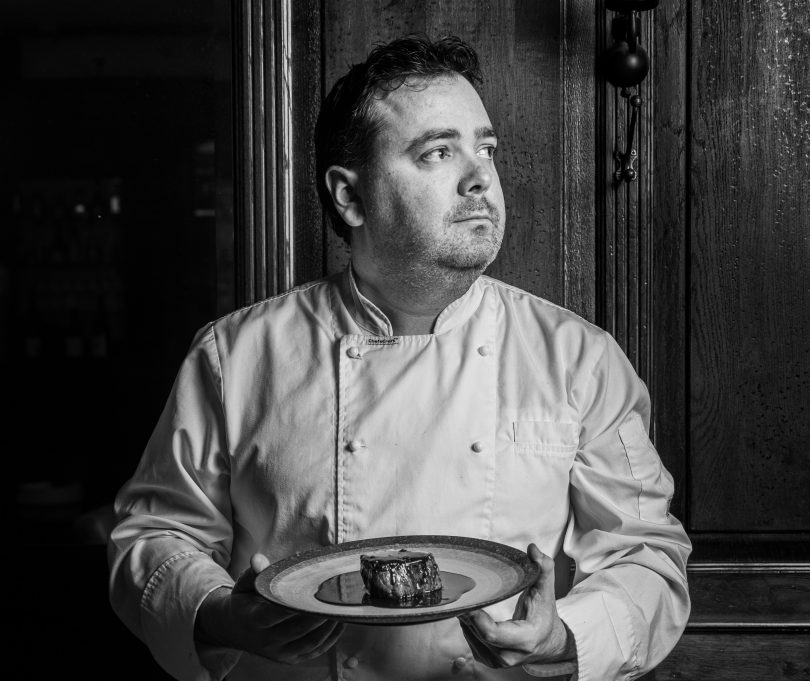 Opposition spokesperson for business Leanne Castley largely agrees with this. She wants consumers to be encouraged out and about to spend.

Ms Castley cited the latest CommSec State of the States report and the ABS Labour Force report which show the ACT now has the second-worst performing economy in the nation and the second-highest level of unemployment at 4.5 per cent.

“Consumer spending has not bounced back as the Chief Minister predicted, and the threat of new COVID variants means we will need an economic plan that factors this in,” Ms Castley argued.

Ms Castley said businesses don’t want “handouts”, but they want conditions in place that would let them operate as usual.

But Ms Castley wouldn’t go as far as to say ACT public servants should be required to return to the office to support small businesses such as cafes.

“I’m not here to talk about the public service, I’m here to support business, but I would say to everybody to get out and buy your coffee like you used to.”

Mr Barr has previously said hybrid work will be the future of the ACT public service. 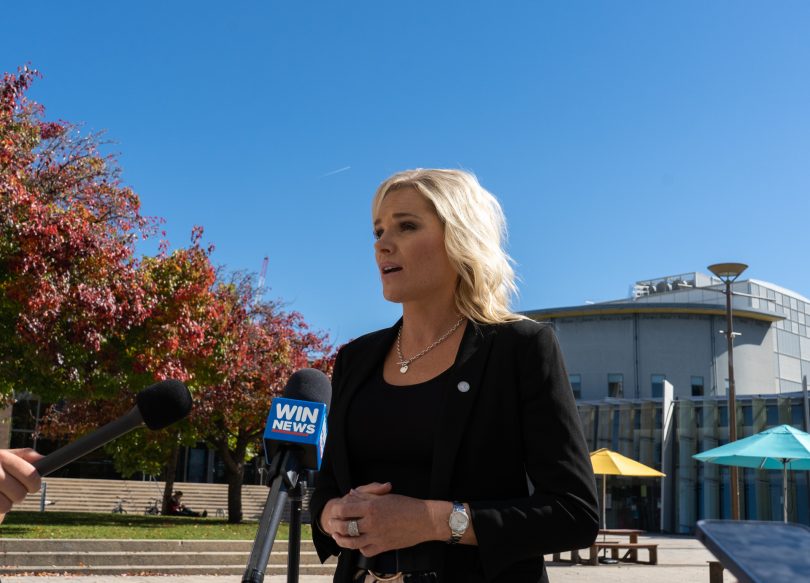 Leanne Castley says people need to get out and spend. Photo: Region Media.

Ms Castley didn’t have a solution to all the problems facing business but implied any remaining restrictions should be lifted and people should be “encouraged out”.

Currently, the only public health restrictions in place in the ACT are classified as “low-level”. There are some density requirements in place, and patrons must wear masks and remain seated while dancing and drinking.

According to a recent survey conducted by the Canberra Business Chamber, 70 per cent of businesses said their situation in January was worse than the previous month and worse than the same time last year.

Managers of the newly revamped Transit Bar know all about the difficulty of running a business under the current conditions.

While they are up and running now – albeit not at capacity – on the first night they tried to open, a staff member worked while unknowingly COVID-positive, which set them back at the beginning again.

It’s not an uncommon situation either. After staff members became infected, Mr Brabender had to close his restaurant for a whole week.

READ ALSO Working from home: the genie is out of the bottle, new research shows

The difference with the Omicron wave – when compared with previous waves – is the government has not put in place serious public health measures such as lockdowns, and therefore neither federal nor state governments have provided the kinds of financial support that had been delivered in previous lockdowns.

The month of January was also the first time the ACT has experienced real rapid and widespread community transmission of the virus, which businesses then saw reflected in a lack of community confidence in coming out and spending money.

“I think people are fearful, but others have just learned to stay at home, so we need to encourage people to come out to their local pubs and clubs,” Ms Castley said.

The ACT Government has extended the provision of support measures to industry sectors that have been most affected, such as food service businesses and tourism and hospitality. Nightclubs are being provided with specific support.

Mr Barr told the Assembly he is ‘cautiously optimistic’ going into 2022 and that job creation would be a priority. He said the health and economic situation would both be monitored in the coming weeks and more support could be offered if needed.

Business Minister Tara Cheyne strongly rejected Ms Castley’s claim that there had been no increase in spending in the Territory since the ACT emerged from lockdown.

She acknowledged some businesses had shut down in recent weeks and also encouraged Canberrans to spend their money locally, but accused the Opposition of picking and choosing from data sets.

Maybe the journalist who wrote this story should read the state of the state report and delve a little deeper into its findings when reporting the state of economic activity between jurisdictions. Can I just correct the record. The report reported that in an absolute sense, all of Australia’s state and territory economies are performing solidly and this growth has been well supported by their governments’ strong fiscal and monetary stimulus efforts. The current report rates the ACT as third in economic growth with a remarkable 22.2% increase in spending since the last report in December. This followed increased growth in October with the ACT top ranked on equipment investment and second on retail trade. I could go on!!

This is not about the entire ACT economy.
The hospitality industry has been lobbying hard for more Government support. The Opposition are running with that.

I have heard Industry reps complaining that the current restrictions are still too severe and they need to be lifted. The irony is that, if anything, any improvement in their bottom line could be short-lived, if it also resulted in increased patron and staff infections.

Sadly, there are many businesses (not just in hospitality) and many employees, many of them part-time or casual and the ACT Government can only do so much.

This article is misleading and lacks scrutiny. The author is insinuating without backing it up that there are low levels of consumer confidence, staffing shortages and uncertainty in the economy. Well that isn’t what the statistics are showing and what was in the report. Ms Castley is demanding that the government release an updated economic recovery plan on how it will respond to the challenges of Omicron and future waves of Covid. If the author had done her homework and Ms Castley had been listening, she would have noticed that the government did just that last week in the Assembly. The CM spoke for nearly an hour as well as all MLA’s. Ms Castley appears to be backing away from her demands in the Assembly that the CM get public servants back to work to prop up business. Canberrans will make up their own minds including how and when they return to work. We don’t need to be told by Canberra Liberals to get back to work. The business and hospitality sectors don’t need any more government handouts. They aren’t the only ones in the economy! If businesses can’t find staff then pay a decent wage. Retail and hospitality activity throughout Braddon and Civic over the entire weekend was booming. Cafes and restaurants were simply brimming! Ms Castley misleads readers by claiming the ACT has the second highest level of unemployment at 4.5%. These are low unemployment figures and the ACT has consistently shown strong labour markets. What would you expect in a fast-evolving environment dominated by the Covid-19 virus. Rankings of relative performance can change, even on a monthly basis and this is noted in the report.

The other interesting element is that so much of the argument for additional support seems to rely on an assumption that there will be a return to a normal ‘pre-covid’ world, with 5 days in the office standard for most office based workers.

There are few things in a pandemic world you can be confident of – but that not being the outcome in the long term imho is one of them. Some will move back to 5 day a week in the office, but I suspect an overwhelming majority wont.

So is it less about some form of support plan for the short term, and more about some form of transition element that recognises its unlikely things will look the same in the longer term. For example, I can’t see how possibly the number of cafes and hospitality venues/businesses directly targeted at/reliant on the office workforce will ever be sustainable at any level near what it was pre-pandemic. 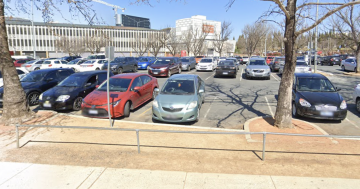 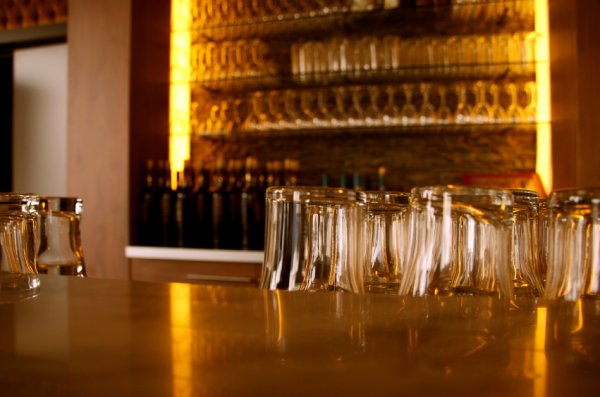