NSW's mobile speed camera signs are back by popular demand, but there's a problem 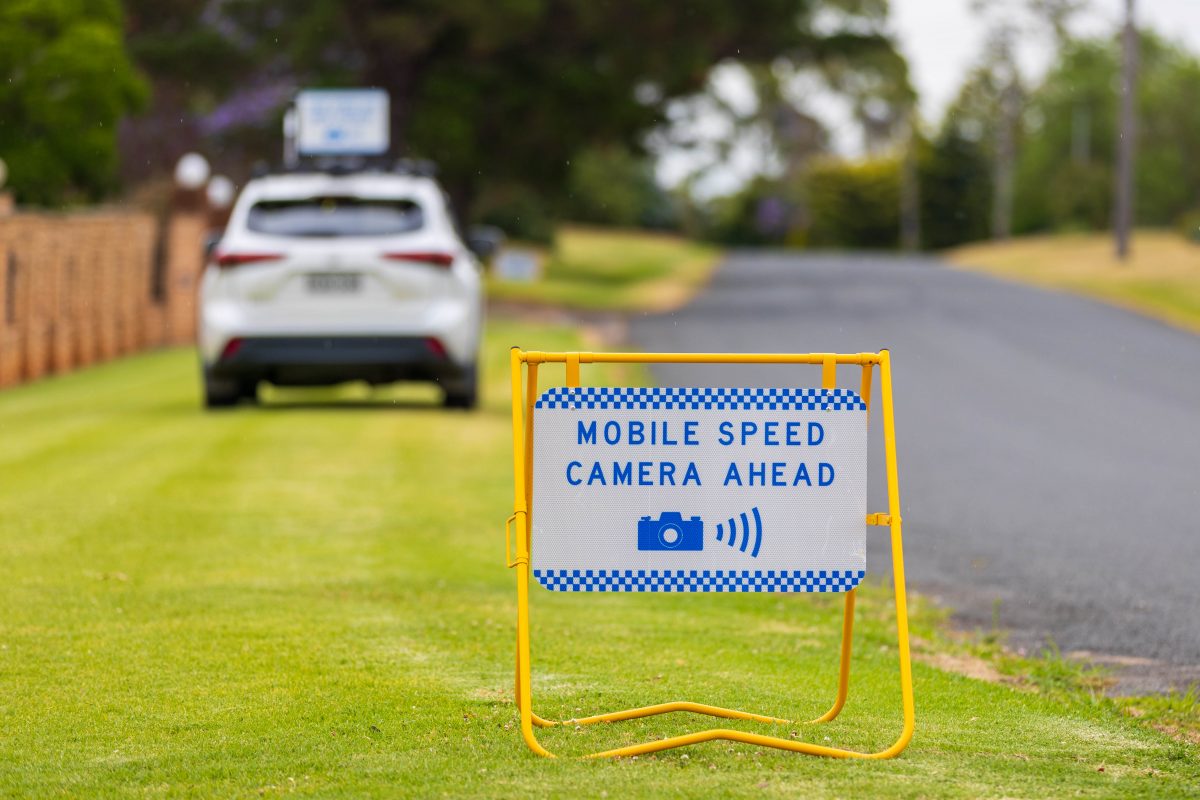 The storage of mobile speed camera signs is causing difficulties in NSW. Photo: Transport for NSW.

Almost three-quarters of NSW’s mobile speed camera fleet is grounded by – of all things – a lack of cargo space.

From 1 January, the State Government was required to refit all of their 143 mobile speed camera vehicles with two clear warning signs, after a dramatic spike in speeding fines prompted intense public backlash.

These were to be displayed on the side of the road before and after the mobile speed camera.

However, it didn’t take long for the contractors – hired by the NSW Police Force – to discover the sandwich-style “Your speed has been checked” signs were unable to safely fit in 105 of the vehicles.

As a result, this leaves 38 mobile speed camera vehicles in operation across the entire state. The solution will either involve a retrofit or replacement, but either way, it’s not likely until April 2023.

The roadside warning signs were removed in November 2019 in an attempt to crack down on speeding – “the biggest killer on NSW roads”. The threshold for low-level speeding fines also dropped.

The result was $45 million in speeding fines over 12 months – more than twice that of the previous financial year – despite a tragic 21 more road fatalities between September 2021 and 2022.

Opposition leader Chris Minns dubbed the scheme “revenue-raising on a giant scale”. And it didn’t take long for motorists to respond either, with some going so far as to make their own warning signs and place them in front of mobile speed camera vehicles.

In April 2022, Transport for NSW agreed to refit warning signs to the top of mobile camera vehicles, followed by new guidelines a few months later to prevent the cameras from ‘hiding’ behind trees, poles, or parked cars.

“We have had a number of instances where mobile speed cameras have parked behind trees or poles, making it difficult for drivers to be alert to a mobile speed camera operating in the area,” NSW Minister for Regional Transport and Roads Sam Farraway said at the time. 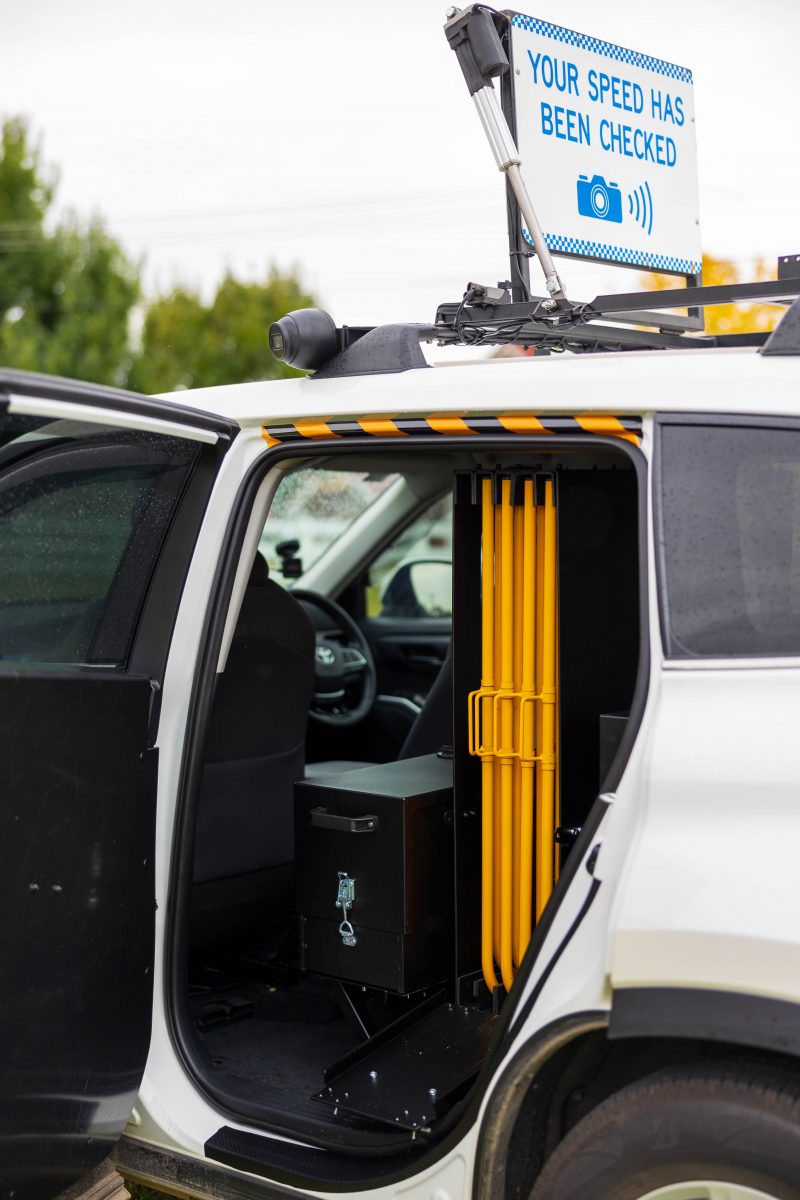 The mobile speed camera warning policy in NSW has now shifted right back to where it started.

The current fleet in NSW is made up of Nissan X-Trail, MG HS, Toyota Kluger and Hyundai Santa Fe vehicles.

The larger Kluger and Santa Fe vehicles have been in use since before the removal of the warning signs, but during a budget estimates hearing, Transport for NSW deputy secretary Tara McCarthy revealed at least 47 previous-generation T32 X-Trails lack the cargo space to carry the camera and safety equipment as well as the warning signs.

Ms McCarthy said these cars would either require “significant modification” or may need to be replaced altogether.

“The vehicle fit out will be completed by April 2023.”

What’s left of the NSW mobile speed camera fleet is now the most clearly signposted program in Australia, with more advisory signage than ever before.

Over the border in the ACT, the 10-strong fleet of mobile speed cameras are managed by Access Canberra and take the form of white Volkswagen Multivan vehicles with a “Your speed has been checked” rooftop sign.

“The signs cannot be automated and therefore required an operator to leave the van to install them, presenting a number of safety risks to operators,” Access Canberra said.

“It’s the responsibility of all road users to know the speed of the road they’re on at any time.”

I would actually call a speed camera fine a fee for not paying constant attention, either to the speedo or to your surrounds (i.e. a white van stopped to the side of the road). However, to say “I’m all for speed cameras as it’s a tax on the stupid” implies that critics who have said over many years that “it’s just revenue raising” is right, AND raises the bigger question – what is USEFULLY being done by the Government to improve safety on the roads? Canberra has seen a spike in the number of fatal accidents over the last year, with reporting suggesting many drivers died under the influence of recreational drugs. These people are not deterred by roadside vans or fixed cameras – hell, they are just additional obstacles for stoned drivers to crash into. Yet RBTs are just about non-existent in the ACT now – what a (unfunny) joke…

I’m all for speed cameras as it’s a tax on the stupid. There will always be a proportion of the population with no situational awareness and understanding of basic road rules and signs. Funny that gambling is the same thing yet the left wing dullards shame companies for making money off the stupid in a similar way.

The speed limit was previously present on the signs on top of the ACT mobile speed vans. What is the new safety issue that has arisen? Transparency thanks Access Canberra.

Apparently it’s because they had to be manually put up.

It wouldn’t be hard to put an illuminated screen on the back of the vans to display the speed limit clearly. A sign which can be changed from inside the van.

It might stop numpties slamming on the brakes at the sight of a van when they are already doing 10 below the limit.

In the ACT mobile speed cameras routinely conceal themselves often in places where speed and accidents are not a problem eg: Dryandra St. The argument that the speed lollipop signs cannot be displayed is fatuous in the extreme and treats motorists with contempt. The existing camera sign is automated. An adequate automated LED sign indicating the posted costs about $100. Not displaying the posted limit causes the unsure in 80 zones to brake to 60 randomly – I think that despite the fact drivers shouldn’t be tailgating it’s dangerous. We should follow NSW.

When you see the sign “your speed has been checked” it’s too late to slow down.

It’s like your remote burglar alarm alerting you that your property has just been done over.

Or, if you are an aircraft pilot, it’s the same as having runway behind you or fuel on the ground.

The psycho is 100% correct, which is unusual.

If drivers abide by the law, there’s no problem. They know the road rules and the speed limits, so why complain when they’re caught doing the wrong thing?

It’s very different where the speed limits or road rules are not clear.

In black spots yes, not at the bottom of hills on a straight stretch of road. Even with adaptive cruise control, gravity takes over sometimes. Also, placing these revenue raisers near a plethora of road signs, showing directions, speed and which lane to turn right or left, when you are also supposed to be looking at your speedo and the traffic in front, so you don’t rear end as the person in front is also trying to interpret directions

Their called brakes. Use them! Like Psycho said, if you abide by the law there’s no problem.

When you learn to adjust your car’s speed for gravity and road conditions, as well as to obey the rules, you may become a good driver.