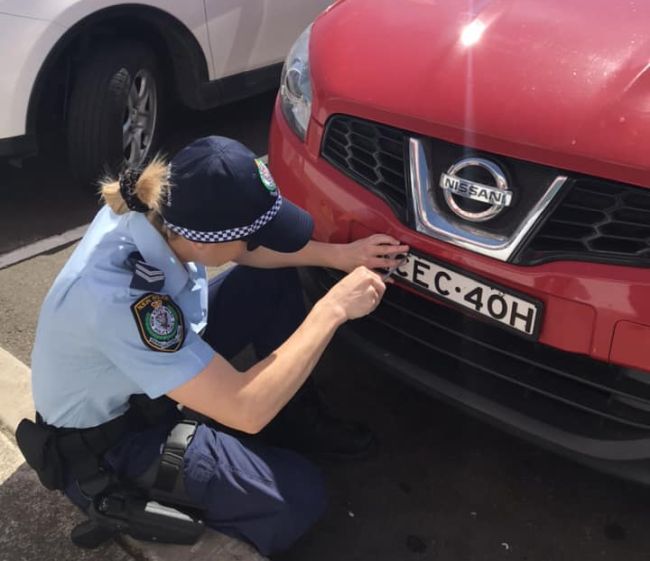 The arrest of a man in Queanbeyan on Sunday for stealing a number plate from a vehicle has prompted police to urge vehicle owners to install anti-theft screws to secure their vehicle’s identity.

Just before 8 pm on Sunday, a 54-year-old man was observed stealing the front number plate of a vehicle parked in a carpark on Monaro Street, Queanbeyan.

A short time later, police attended an address in Queanbeyan East and arrested the man, who was taken to Queanbeyan Police Station where he was charged with larceny. Bail was refused when he appeared in Queanbeyan Local Court the following day.

Officer-in-charge of Queanbeyan Police Station, Inspector Charles Hutchins, said there has been a significant increase in number plate thefts lately, especially in the Queanbeyan area.

Inspector Hutchins said this type of crime is of great concern as stolen number plates are often used by offenders to make identification more difficult while committing further offences, such as frauds, thefts and traffic offences.

“I encourage owners to regularly check their number plates and report any missing to police immediately. The types of crime are becoming more common due to the increasing quality of CCTV cameras at petrol stations and other businesses,” Inspector Hutchins said.

“In addition to fitting anti-thefts screws, some ways of reducing number plate theft are to park your vehicles underneath CCTV cameras and in well-lit areas. Park your vehicles in a garage and not on the street, and immediately report the theft to police.

“It will take 15 minutes to change your screws but may save hours into the future.”

He said Queanbeyan Police regularly work with Queanbeyan-Palerang Regional Council to conduct anti-theft screw fittings at various locations in the area. The next day is planned on Wednesday, 19 February in Braidwood. These days are promoted on the Monaro Police District Facebook page.

Apparently there are four different types depending on the thread on your car. The ones I received were only good for my front plate so I suggest bringing a screw driver. Remove one from front and back and match it wherever you decide to get yours.

Is it a regulation that all cars sold through dealerships in the ACT have these screws?

So, I dropped into a Police station and to remove the screws, I’ve been told you need to ask the Police to do it as they have the tool.

What happens should one need to remove the safety screws legitimately?

Lachlan Johnstone - 28 minutes ago
Shane Cairney so if it were your home would you want the agent to get the highest price possible?... View
Tim Gardner - 4 hours ago
Agents are not being fair in this current market, I know of 2 sales in 2 weeks that the asking price was accepted, then the a... View
James Watt - 7 hours ago
Joel Suryawanshi if you were selling your house, wouldn’t you want your agent to maximise your sale price? Not sure why the... View
Motoring 30

whatwik - 1 hour ago
Shock, horror! - it's true! The NSW Liberal Party wants "to charge up the Nation and make NSW the Norway of Australia when it... View
Capital Retro - 4 hours ago
Still waiting for the details of those mythical fossil fuel subsidies. View
Lifestyle 11

Capital Retro - 3 hours ago
Indeed, 29% were made in China one recent month and most of those went to Europe. Most other EV brands are made in China. If... View
Capital Retro - 4 hours ago
If a diesel engine needs an operating temperature of up to 600 degrees to "clean it up", why do they all now come with Diesel... View
Ol L - 5 hours ago
Tesla’s for one are Chinese made. A luxury car tax on a Chinese car? Please…… View
News 1

Barbara Boswell - 4 hours ago
Have a bus (LR) licence, can I be of help ???? View
Dinora Collins - 6 hours ago
This is a great interim measure we need public housing for women and children every night in Canberra. View
Community 44

Capital Crime Files - 4 hours ago
Sam Warry and wrote about and had an event last year to mark the 80th anniversary of the air disaster. https://www.google.com... View
Lyn Tutt - 5 hours ago
Rayleen Jordon not a helicopter some random light View
Sam Warry - 7 hours ago
Capital Crime Files has done an amazing job at telling the sad story of Keren Rowland. Also goes into amazing detail describi... View
News 1

Fresh faces on the beat in Queanbeyan