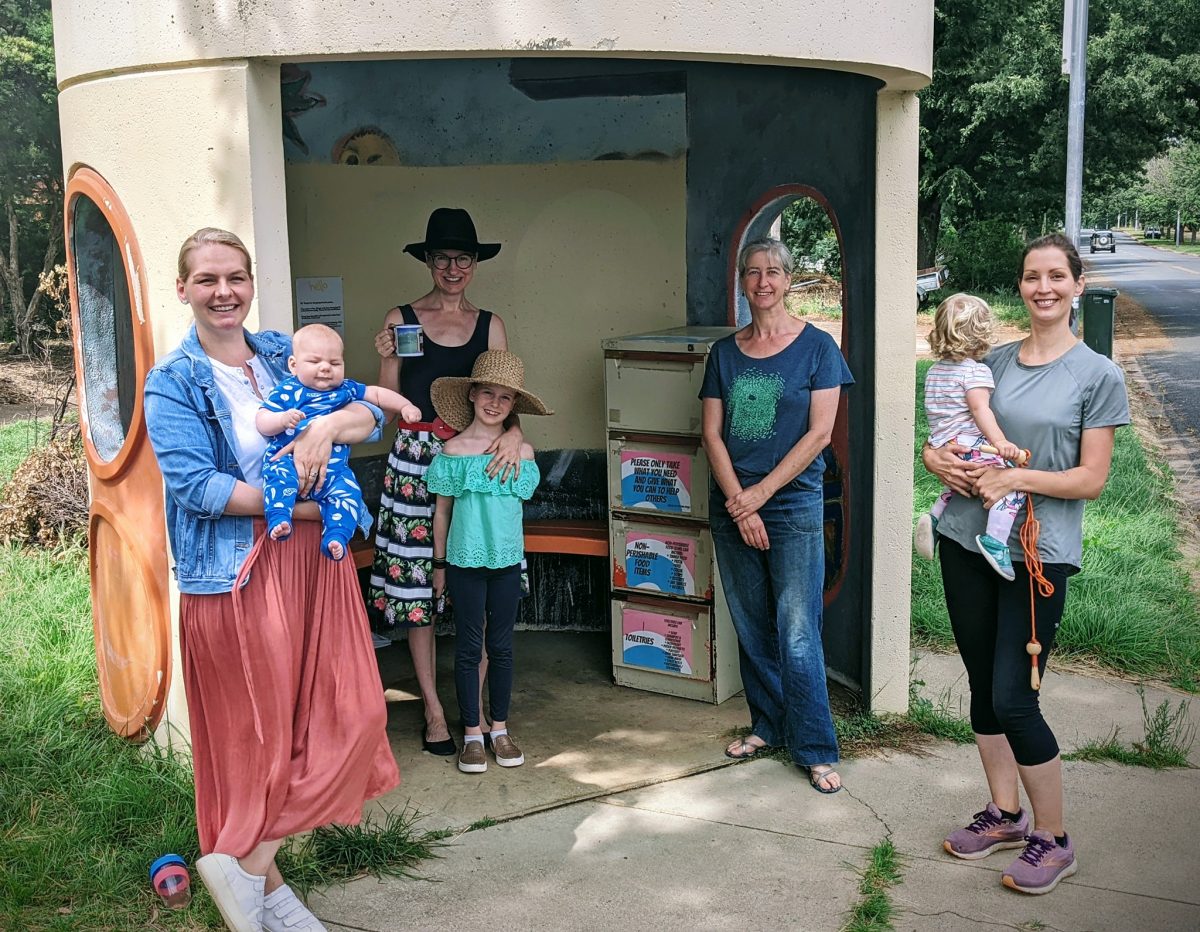 One of Canberra’s iconic bus stops has been given a new lease on life as a street-side community pantry, offering food and toiletry staples to those struggling to make ends meet.

The ‘Ainslie Community Pantry’ joins a growing number of resident-run ‘community pantries’ in the suburbs and was established in early 2021.

Founder and local mother of two Christina Schwarz says demand has increased in the past few months as more and more individuals and families feel the cost-of-living pinch.

“Many people want to help their neighbours in need, but they’re not sure how. This gives them that ability.”

Inside the disused bus stop on the corner of Majura Avenue and Officer Crescent in Ainslie, you’ll find two filing cabinets packed with rice, flour, pasta sauce, toilet paper, soap and more, and a notebook for either requests or ‘thank you’ messages.

“Please only take what you need, but give what you can,” Christina says.

“It’s not a shopping spree. It’s to help get by for one to three days, not for a week or month. So far, it’s done extremely well.”

It all began in the lead up to Christmas 2020, when Christina noticed a rise in the number of posts asking for help on the local ‘Buy Nothing’ Facebook group.

“There were families we knew needed help, so a few of us turned to the discussion of a street pantry and what would work,” she says.

Street pantries currently exist in Ngunnawal, Stirling, Kambah, Dunlop, and Casey, with regular support from local charities such as Helping ACT and Ken Behren’s Helping Hands. However, since Ainslie got in on the action, Christina says both Braddon and O’Connor have lost theirs.

“With those two going, we have seen an increase in traffic. Some are even coming from Dickson and Hackett, so we’re growing into a community pantry for the whole inner-north.” 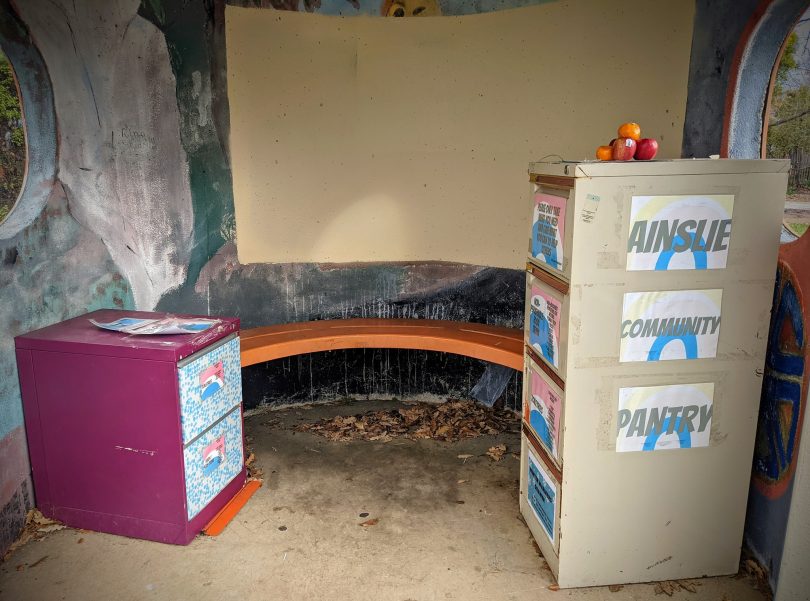 Together with the bus stop, the two filing cabinets keep the items high and dry. Photo: Ainslie Community Pantry, Facebook.

When Christina reached out to the other pantries with her plans for Ainslie, she noticed how many of them mentioned how hard it was to get off the ground.

“I honestly believe there would be more street pantries if it was easier to build them. Trying to build the pantry itself is hard because of the heavy items it has to accommodate and the weather it has to survive.”

In Christina’s case, she lives around the corner from a disused bus stop, meaning a strong and sheltered structure was already in place. Two filing cabinets – donated by members of the Ainslie Buy Nothing group – provided a non-fixed storage solution.

The pantry is open 24/7 and checked on at least once a day by local volunteers to ensure everything is well stocked and secure. Christina says they are currently looking for a company to provide weather-proof signage so locals can easily spot it. 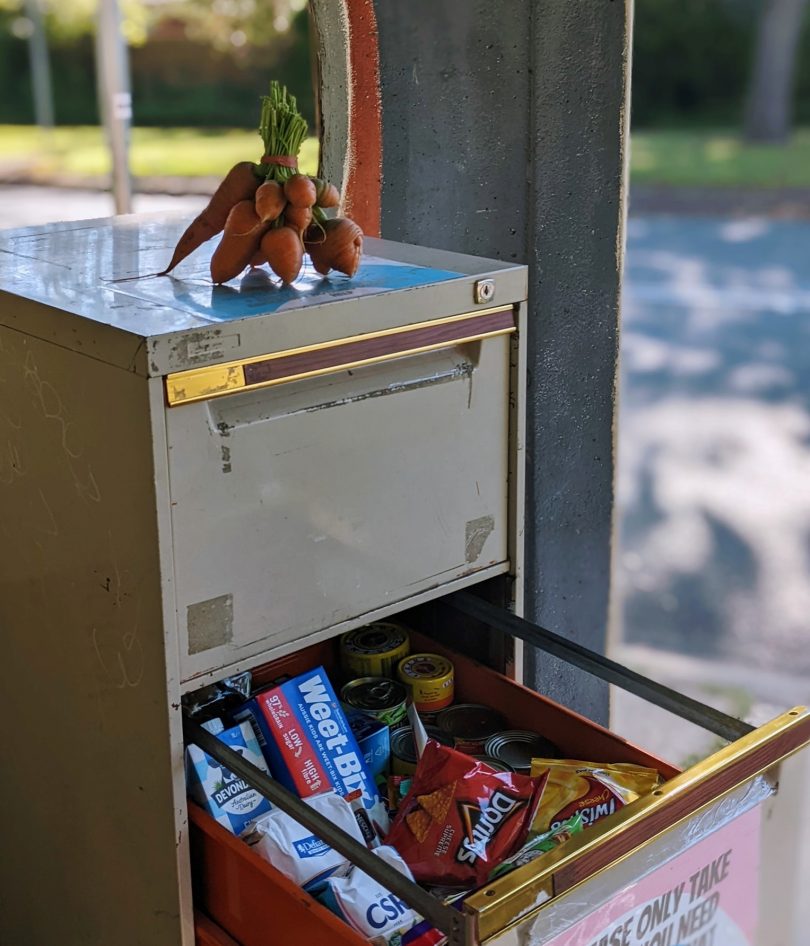 Volunteers visit the pantry every day, topping it up with donations. Photo: Ainslie Community Pantry, Facebook.

“Preferably, at all times, there is at least something in those drawers,” Christina says.

“You don’t want people to have made their way there only to get there and find nothing.”

Christina describes the community’s reaction to the pantry as “fantastic”.

“The volunteers often bump into people who are either donating or collecting supplies. They tell us how good it is that such a thing is there and how much it helped them get to the end of the week. We also keep a little album of all the written notes we get.”

She says there is always the potential for vandalism and for “someone to come in and wipe it clean”, but the “positives far outweigh the negatives”.

“By the number of little notes, we have enough anecdotal evidence to know that it is really helping, even if there is risk there.”

As usual the political banter comes to the fore by self proclaimed experts…stick to the topic, might enlighten some. This is a great initiative, well done all 🤗

How may I contribute, please? Should I message you?

Fabio Fabbo that’s so kind of you! ❤️ the Ainslie Community Pantry is available 24/7, so you can donate items at any time that suits you. You could drop non perishable food items (in date and not already used) such as rice, pasta, sauces, Canned foods, toilet paper, toothpaste, shampoo, soap…. just some examples if that helps.
Location: on Majura Avenue, just down from Officer Crescent.

…separately if you have any signage skills or resources to paint the filing cabinet, please get in contact with us directly (through a Facebook message or ainsliecommunitypantry@gmail.com). Happy for you to message us directly if you ever have any questions 😊👍

Jorge Gatica do you walk around town with liberal sign displayed ??

Jorge Gatica I got better things to worry about then politicians , don’t matter who gets in there all the same to me .

Well then, it’s a shame how relentlessly the Canberra Liberals (sic) work to show that they shouldn’t be trusted to run a sausage sizzle, let alone the ACT.

Cost of living is 90% driven by federal policies…… of which you’ll find the liberals have been in charge for 20 of 26 years. You’ll also have noted cost of living seems to be a national problem, but I’m sure thats Andrew Barrs fault in your ridiculous biased mind.

Justin Watson can you provide evidence how the federal government has caused the following to increase in the ACT?
Rates, land tax, car registration, electricity rise of 12%, rents, etc,etc,

Jorge Gatica Because the ACT government is affected by cost of living increases also. When costs go up, the ACT government also has to pay more to provide all those services. Also how is it every single state and territory are having cost of living issues yet its the ACT governments fault for ACT cost of living. Yes they can help on some things, but they have to deal with rising costs as much as every individual does. Seems far more likely its driven by federal government policy as afterall it is their economic policy that has the greatest effects on things like housing , food, health and education. Cost of living has been rising while wages have stagnanted for a decade or 2 now. We were actually paying the cheapest rates of electricity for years as well in the ACT and people still complained about the cost of electricity then. Far easier to just blame a political party you don’t like.

Jorge Gatica which doesn’t answer my point at all.

ReplyHide replies
Priscilla Summers1:47 am 11 May 22

Mark Chapman
Labor and Greens should never be trusted!

Priscilla Summers Liberals (sic) can be trusted to support millionaires, bash the unfortunate, and ignore problems until they’re forced to deal with them! 😂

Mark Chapman speaking of the unfortunate, who’s evicting over 300 public tenants by force in Canberra?

ACT Labor was great under Stanhope.
Under the financial mismanagrment of Barr the ACT has vastly increased it’s population whilst vastly reducing government housing.
Under dodgy Barr, he has sold more public assets than his predecessors.
Standard of living has dropped for most of us.
Avoid the blinkers…

How is Barr any better?!

ReplyHide replies
Margaret Freemantle12:47 am 13 May 22

Margaret Freemantle under Barr a record number of public housing has been sold and not replaced. Look at the facts before commenting. It was quoted in a CBR free publication.
Houses in the inner south and north that have nothing wrong with them are being sold. Once it’s gone that’s it.

ReplyHide replies
Margaret Freemantle9:06 am 13 May 22

Божана Крстеска I think you need to look at Barr’s latest announcements.

Margaret Freemantle he needs to replace the huge volume he has removed first…
In other words he isn’t adding a record number. 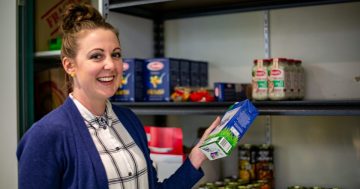 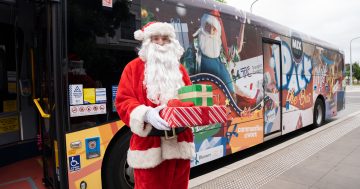 'Pack the bus' with gifts for those in need this Christmas 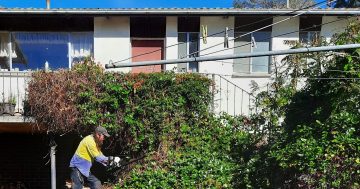 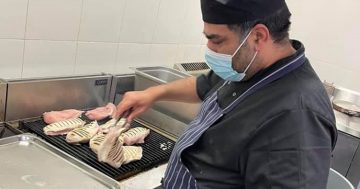