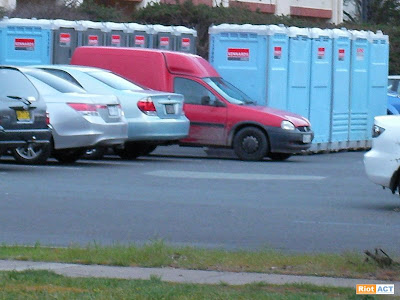 Che and I went along to the brewers night which precedes the National Capital Craft Beer Festival at the Olims courtyard (a hidden gem of Canberra) in Ainslie. We had a lovely boozy time and tasted many great new beers, as well as the new Coopers 62 which is best described as fabulously innoffensive.

But you can get along and form your own opinions. Today they’ve got the AFL Grand Final on the big screen as well as legacy rockers Mental As Anything.

Last year was a smashing success, hence the expansion to a two day extravaganza.

More details on Out In Canberra.

Olims Hotel is actually in Braddon, not Ainslie.

Have a great festival, though.

Jenny Lowes - 56 minutes ago
Judy Sheargold Sure Jude, good idea. Will take that being Gospel, from Linda!! View
News 3

ssek - 8 hours ago
More animals get hit during drought because the drainage next to roads is the only place there is green feed. When there is g... View
Karen Feng - 16 hours ago
is this an indication that we do not have enough land fornthe wildlife to thrive? theres this road from holt to Fyshwick that... View
Community 1