On the Glossy Black Cockatoo 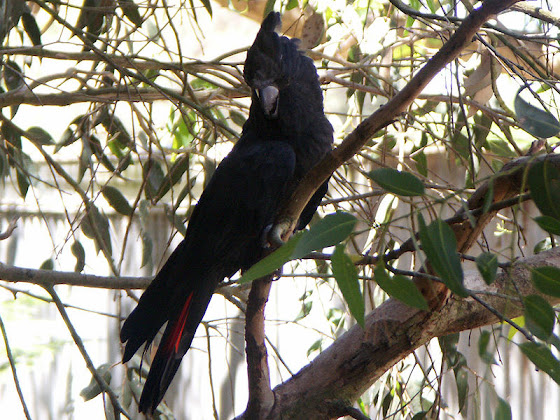 The Glossy Black Cockatoo is considered to be of “least concern” on the threatened spectrum.

But here in the ACT Simon Corbell has listed it as a vulnerable species.

It seems they have flown away thanks to their food source, the Drooping Casuarina, dissipating due to “fire and grazing”.

Seeing as how we haven’t opened up new grazing lands in Canberra for a very long time perhaps we should concentrate on fire then?

Perhaps rather than listing them as vulnerable planting some more dropping casuarina’s would be more effective?

The overall population is declining. The tag ‘least concern’ used is a bit misleading as they are one of the more threatened of the cockatoo species. NSW, ACT and Queensland list them as vulnerable and Victoria lists them as threatened. With the exception of the South Australian sub-species which is listed endangered, thankfully they have not yet been listed nationally under the EPBC Act, however given why they are declining it is only a matter of time.

Allocasuarina verticillata is found on Mt Ainslie and Mt Majura amounts other dry rocky hillsides in the ACT where very occasionally the Glossies can be found. Might only happen once or twice a year. Still, it is nice to know they do visit the ACT.

I believe the new Arboretum has planted a stand of A. verticillata just for the Glossies.

I’ll have to plant a few of these. Thanks for the tip.
Currently have a bunch of native plants to entice the birdies to come visit. It works wonders
🙂

Looking up the tree idly, the scientific name is Allocasuarina verticillata and it can grow in heavy clay or sand. 5-10 m. Looks like there’s varous mail order places who’d send tube stock if the local bunch can’t get them in.

I’m in the process of planting trees in my garden and if someone can put me onto a source for drooping casuarina’s, I’ll get one. Anything that attracts these kinds of birds is welcome in my garden

My Flanders Poppy flowered yesterday and I’m pretty chuffed about it, what with the plants excellent timing and all.

Still to get a lone-Pine and heaps of room for more trees, so recommendations welcome!

I’m not sure Simon has a great grasp of all things environmental. In a press release this week, he was claiming a erlatively recent piece of ACT legislation was the reason 54% of the ACT has retained its native vegetation.

Capital Retro - 5 hours ago
I was surprised to hear a secondary school student tell me that teachers are now telling students that they have rights and e... View
Kasra Mn - 14 hours ago
At what $$ point is someone wealthy? View
Anita Patel - 14 hours ago
An excellent article. View
News 2

ACT resident - 5 hours ago
This latest CRS thought bubble promises flammable construction waste to be diverted from landfill and delivered for processin... View
simm - 20 hours ago
FYSHWICK is the wrong location for a high volume waste tipping station where that would interfere with surrounding investment... View
Opinion 1

rationalobserver - 7 hours ago
Its not just cars, all sorts of things now use our roads and it should be a shared cost. Usr pays and all that. In some subur... View
cycladelec - 15 hours ago
Plenty people with much more informed views than that Riot ACT know that now is not the time to impose a Road User Charge for... View
MERC600 - 1 day ago
What will be of importance is how the Feds look at electric powered vehicles. Fuel excise is a great earner for the Feds.. Ev... View
News 56

Anne O'Hara - 17 hours ago
Hannah Zurcher I have no problem with workers going for what they think they are entitled to, I do have a problem with them p... View
Nathan Lofthouse - 18 hours ago
Sorry who else is pulling 4% p.a ? View
Phill kirkham - 21 hours ago
Suez has a contract that commenced in 2013 and expires 2023, worth $180million. They have 5 other contracts worth around $12m... View
Property 46

russianafroman - 19 hours ago
Dukethunder You are not understanding what I am saying. I told you to understand what the heat island effect is. Yet you give... View
News 53

Jordania - 21 hours ago
Sanctimony has nothing to do with objections to Mr Seselja. Indeed, if there is any sanctimony around it is his. His ultra-co... View
News 38

@The_RiotACT @The_RiotACT
Queanbeyan-Palerang Regional Council has been named the most progressive metropolitan or regional council in NSW for 2020 https://t.co/2wSisTErgK (40 minutes ago)

@The_RiotACT @The_RiotACT
Fiona Carrick is back in charge of the Woden Valley Community Council after a strong election tilt, and more fired up than ever https://t.co/83KCM8twvy (2 hours ago)