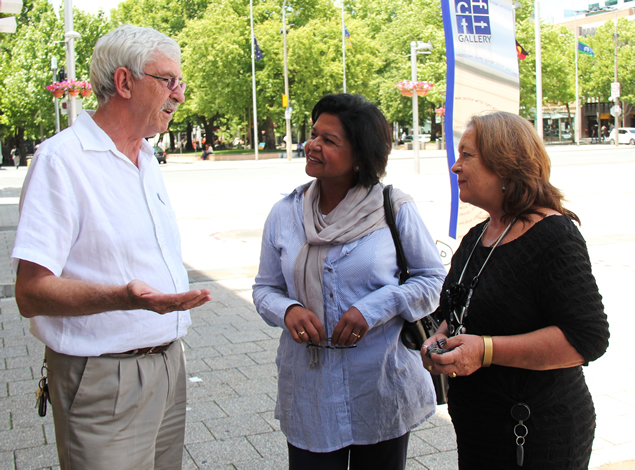 Minister for Multicultural Affairs and Minister for Police and Emergency Services Joy Burch today announced the final membership of the reference group tasked with overseeing actions to promote community harmony identified at the landmark One Canberra Symposium.

“The tragic, criminal events in Sydney have underscored the importance of maintaining a socially cohesive community, where people of all cultures and faiths are respected and respect each other,” Ms Burch said.

“I have met today with leaders from our interfaith community and with Chief Police Officer Rudi Lammers and the Human Rights and Discrimination Commission to discuss how to take the ideas and suggestions raised at the One Canberra Symposium forward.

“Canberra has a strong and safe multicultural community and it is important to emphasise that no specific threat to the ACT has been identified at this time.

“As the Chief Minister said yesterday, the ACT Government is working closely with ACT Policing and national committees to ensure our planning elements are sufficiently in place for the on-going security and safety of the community.

“The One Canberra Symposium addressed concerns from members of our multicultural community and galvanised energy for an even more socially-cohesive community.

“Ideas raised ranged from using mosques to prepare food packages for homeless people, to creating a reflections centre in Civic for people of all faiths, and holding a week of events celebrating multiculturalism.

“Following the Symposium, I announced that John Hargreaves and President of the Canberra Islamic Centre Azra Khan would co-chair a reference group to put the ideas into action.

“Today I announce that the members of the reference group will be:

“The reference group co-chairs have presented their proposed work plan, including how their work will fit in with the overall process to developing the next strategic document for ACT multicultural affairs. The group will report back to government in June 2015.

“I want this reference group to advise me on making the One Canberra ideas a reality.”

Robina Jane - 13 minutes ago
There is absolutely ‘couple privilege’ for all the reasons you mentioned and more. I’ve been in both worlds over the pe... View
TimboinOz - 14 minutes ago
So it's all a vicious plan to make singles unhappy!!! ??????? Please, get a grip! I'm a father. One of our sons is immuno-com... View
Kiriel - 16 minutes ago
Don't forget that you also get the discount of being able to buy food in larger quantities so at cheaper prices. Oh and it co... View
News 1

nobody - 24 minutes ago
Why didn’t they do this over a year ago, at the same time they first allowed these e-scooters? View
News 66

Scottie Zuxkerberg - 37 minutes ago
Sounds like Ken Behrens have moved to KARENBERRA now..... what a sad place this has become under the socialist Labor regime..... View
Food & Wine 7

JS9 - 5 hours ago
Whether they should or not, the markets do care, because the credit ratings invariably drive the interest rate at which insti... View
JS9 - 5 hours ago
To be fair - an implicit guarantee exists in the form of the RBA. Because it can always print money and buy Government bonds... View
Heavs - 5 hours ago
Dear Chewy and JS9. Thanks for pointing out how things actually work inside government finance. But actually, here is another... View
Community 8

Of all the legislation that the Morrison Government has decided to prioritise, its voter identity bill is arguably the least...
News 66

The outsourcing of Australian Public Service (APS) work, including the use of consultants, has been described as an industry full...
Opinion 47

Network One is a vital source for leads, introductions and business expertise

It’s official: Molonglo to get its own community council

@the_riotact @The_RiotACT
RT @Breaking_247: A 27-year-old woman accused of trying to find a hitman to #murder her parents on the dark web is back behind bars again a… (18 minutes ago)

@the_riotact @The_RiotACT
Being caught drink or drug riding an #e-scooter could set you back more than $3200 under new ACT Government legislation introduced on Wednesday https://t.co/BXeTu3ief9 (40 minutes ago)

@the_riotact @The_RiotACT
Draft terms of reference for the #OrroralValley fire inquiry reveal it will likely explore the operation of an Army #helicopter, the light of which may have sparked the devastating #blaze, and the actions of its crew https://t.co/eWk0EVq9B2 (2 hours ago)