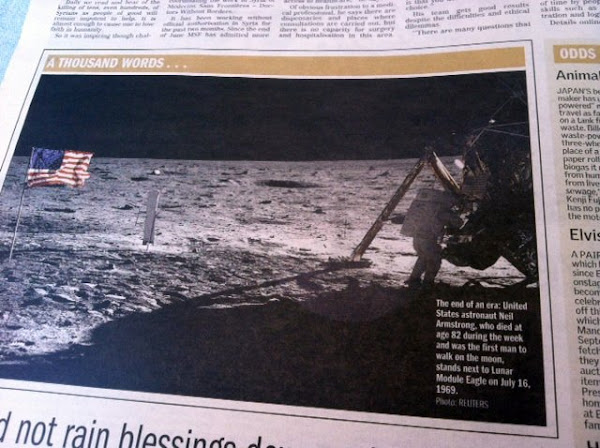 “The end of an era: United States Astronaut Neil Armstrong, who died at age 82 during the week and was the first man to walk on the moon, stands nest to the Lunar Module Eagle on July 16, 1969.”

How hard is it to get a date right? Particulalrly that date.

I think it is time to stop buying the Canberra times!

[ED – And spend the money on a RiotACT paid subscription]

Forget the Muphry’s Law and check out this guerrilla advertisement!

[ED – And spend the money on a RiotACT paid subscription]

How about spell checker if you’re going to try and write off others mistakes?

I see – are you a fellow-graduate of the CCAE-educated poor-excuse for a journalist responsible for this #@%$-up, then?

Did you bother to look at the picture posted? or read the OP’s post thoroughly? The caption clearly claims that Armstrong was on the moon on the 16th. No time zone will correct that one.

The dates regarding the moon landings get confusing because they happened on the moon, outside of our Earthly time zones.

The history books report that Armstrong walked on the moon on 20 July 1969 but here in Australia it was actually 21 July 1969. The 20 July date has been endorsed as the official date because it was an American mission to the moon and it was 20 July in the US when Armstrong made his one small step.

This might be something for younger people to take note of when studying the moon landings at school or uni.

At least they didn’t state that Neil Armstrong failed the drug tests.

How about spell checker if you’re going to try and write off others mistakes?

That’s what happens when you employ sub editors working in New Zealand.

Ol L - 1 hour ago
Interest free but still a loan. And who would want a second hand EV given their finite batteries? And yes I do own one. View
bryansworld - 22 hours ago
However, this would create a signal for new suppliers to enter the market and undercut the original ones who are trying to go... View
keek - 24 hours ago
Great way to ensure the prices of these things all rise very sharply once suppliers know there is an easy 15 grand in it for... View
News 11

chewy14 - 3 hours ago
Dolphin, The Greens will never be a realitisic alternative whilst they refuse to deal with reality when determining their pol... View
dolphin - 15 hours ago
its not hard jwinston, just look at the libs and you understand why. they are just too socially conservative for most of us.... View
HiddenDragon - 16 hours ago
"....The question now is making it work and be accessible to as many Canberrans as possible..." No, Zed, the question is and... View
News 31

Kristine Evans - 12 hours ago
Andrew Barr Then you need to let parents into schools before this happens. View
Christopher Marlowe - 14 hours ago
Jenna Vdv that's why HECS/HELP exists View
Rod Phillips - 15 hours ago
I'd like to see a bit more planning and less guessing all round! We've seen the impact of poor quarantine procedures through... View
Community 1

@The_RiotACT @The_RiotACT
Three young detainees who pleaded guilty to a range of charges over the violent 2019 riot at Canberra's Bimberi Youth Justice Centre have avoided spending extra time behind bars https://t.co/UFXHnxAmx4 (3 hours ago)