Only 314 missed bus services in February 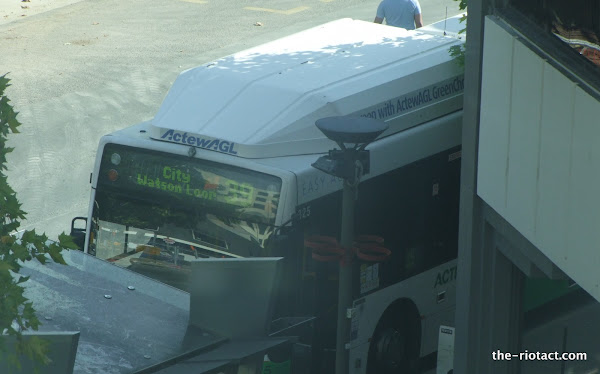 Chief Minister Gallagher is breaking out the bubbly and letting us know ACTION made 68,504 out of 68,818 scheduled services in February.

“ACTION’s service delivery has consistently been at or above 99.5% since July 2011, which is a great result,” the Chief Minister said.

“I am pleased that we have seen improvements in ACTION’s service reliability over the past year with the number of cancelled services dropping from 1079 in February 2011 to 314 in February 2012.

“Service reliability is of course one of the major factors in attracting people to use public transport so I am delighted we have been able to provide greater certainty to passengers,” the Chief Minister said.

There are some weeks it feels like all those missed services were the early-morning commute buses that failed to show.

The last time I willingly caught the bus as a lad, the once-an-hour bus didn’t come, leaving me standing in the cold dark rain. The next day I went and applied for my driver’s licence. Best decision ever.

Non running busses are a real pain. At what point do you decide that it is a missed or non running service? When it is more than 10 minutes late?

When I responded with something like ‘you have to be kidding me’, she said ‘well what do you expect me to do about it?’…

She’s probably right though. On the few occasions where an operator did try to contact the missing driver over the radio/phone thing to see what was happening, I’ve always been told ‘he’s not answering’..

i wonder how many of these services that just never ran, occurred on the weekends.

Good thing we’re in Canberra, people would be flayed over this in Japan.

Non running busses are a real pain. At what point do you decide that it is a missed or non running service? When it is more than 10 minutes late?

If I knew there was no service, I could take a stroll to another bus stop (yeah, I’m lucky to have 2 bus stops within cooee with different routes).

In Brisbane I notice that there is a real time bus advisory system, don’t know how well it works but kept me informed as to when the next bus was due.

Doesn’t happen often, but when it does, it really cheeses you off.

I once missed a 28, then a 25, and in my waiting, watched busses go in the other direction which I could have caught. So annoyed rang the 13 number to have a winge, only to be told that “we don’t know anything about that”.

So if bus HQ hasn’t a clue, what hope have mere mortals.

Capital Retro - 14 hours ago
Double handling makes no commercial sense but the ACT government is worried about that. It is more likely that the waste we a... View
Maya123 - 15 hours ago
I have been in Canberra since way before 2008; 1974 in my case, and I always heard Fyshwick referred to as light industrial b... View
chewy14 - 18 hours ago
JC, Except you'll have South Tralee right next to Hume shortly as well and although we've got a border, you can bet those res... View
Business 19

Vindalu - 24 hours ago
Why don't we do a Trump, stop investigating the problem and stop counting the victims; numbers are bound to improve. View
Vindalu - 1 day ago
I doubt very much whether he is homeless... View
News 14

In a recent RiotACT column on banksias, I mentioned black-cockatoos in passing – and nearly all the subsequent comments focussed...
News 23

@The_RiotACT @The_RiotACT
The owner of two distinctive office buildings in City West plans a $4.7 million revitalisation for the precinct, with the centrepiece being a new pedestrian plaza connecting them https://t.co/wJkzDPrrJl (47 minutes ago)