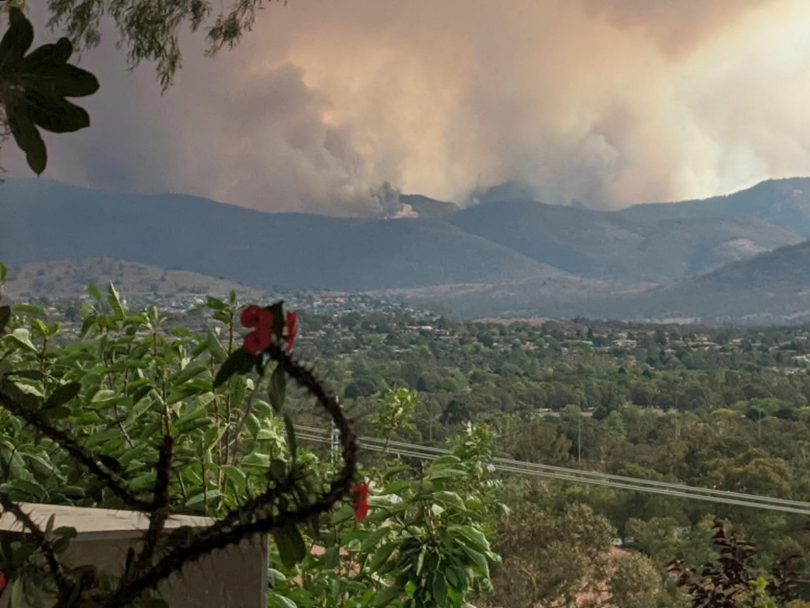 View of the Orroral Valley fire from Fadden at 6:00 pm. Photo: Region Media.

Update – 6:00 pm, 28 January — Flames are now visible around Booroomba Rocks from the Orroral Valley fire, and residents in Banks have been warned that the fire could spot to within one kilometre of the suburb in the next few hours.

The fire is travelling in a north-east and easterly direction towards Boboyan Road, Apollo Road, Top Naas Road and Tharwa Village, but is spotting up to five kilometres ahead.

ESA Commissioner Georgeina Whelan said there is still no immediate threat to properties in Canberra suburbs, although there has been doorknocking in Banks and southern Tuggeranong suburbs to provide information and assist with planning.

Flames are now visible from the vicinity of Booroomba Rocks as the Orroral Valley fire begins to create its own weather patterns, spotting up to five kilometres ahead. Door-knocking is now taking place in Banks and residents in the southernmost suburbs are being told to enact their bushfire survival plans.Further details: http://ow.ly/d00650y6yaR

“The fire is expected to expand to 7000 hectares within the next few hours and is now travelling in an easterly and north-easterly direction,” Commissioner Whelan said.

“Properties may be impacted by embers well ahead of the fire, causing spot fires.”

People in Banks, Conder and Gordon are being told to activate their bushfire survival plans now, as with people in Smiths Road and remote areas of the Orroral Valley. People in Calwell, Theodore and immediate areas should monitor conditions.

There is no current threat for Burra and Royalla and firefighters are working to protect the Mt Tennant tower, the Telstra exchange on Boboyan Rd and the Royalla solar farm.

Transport plans are also in place if an evacuation is ordered for people in Canberra.

The Department of Defence has confirmed that the fire most likely started when a helicopter landing light created enough heat to set the grass on fire. Further details on the RiotACT shortly.

The following road are closed:

Update – 4:30 pm, 28 January — Residents of Tharwa are being advised that it is now too late to leave as the Orroral Valley fire remains at an emergency advice level.

The ACT Emergency Services Agency (ESA) says that properties are under threat.

“If you are in the areas of Tharwa Village, Boboyan Road, Apollo Road and Top Naas Road, you should seek shelter immediately. It is now too late to leave,” the ESA website said in its update at 4:30 pm.

The fire is travelling in a south-east direction towards Boboyan Road, Apollo Road, Top Naas Road and Tharwa. The fire is out of control.

“The fire may pose a threat to all lives directly in its path. People in these suburbs are in danger and need to seek immediate shelter as the fire approaches. Driving now is extremely dangerous and potentially deadly,” the ESA said.

UPDATE 4:40 pm: It is now too late to leave Tharwa. Warnings for the emergency level Orroral Valley fire are rapidly escalating. This is now the most recent advice. An evacuation centre is open at Erindale College, and nobody should return towards Tharwa.Further details: http://ow.ly/d00650y6yaR

There is currently no threat to properties in Canberra suburbs.

People in Banks, Conder, Gordon and Calwell should continue to monitor the situation and stay up to date.

The size of the fire is currently 4646 hectares.

“Conditions are very dangerous. Firefighters may be unable to prevent the fire from reaching your property. You should not expect a firefighter at your door,” the ESA said.

“Power, water and mobile phone service may be lost, and road conditions may become dangerous. It is now too late to leave. If you are not in the area, do not return.”

Roads currently closed include Tidbinbilla Rd at Point Hutt Crossing, Tharwa Road closed at Banks, Sunshine/Smith Roads, Naas Road at the Namadgi Visitors Centre, and Boboyan Road at the ACT/NSW border. These roads are only open to people evacuating.

Properties may be impacted by embers well ahead of the fire causing spot fires.

An evacuation centre has been opened at Erindale College.

BOM forecaster Abrar Shabren told Region Media winds on the fire ground are light from the west to south-west. A wind change is expected to pass through the fire ground between 7-8 pm tonight.

Mr Shabren said the change will see winds turn blow in an east to south-east direction between 10-25 km/h. Winds will become calm overnight and into the morning.

Smoke haze is also once again expected in Canberra tonight.

Update – 2:30 pm, 28 January – The Orroral Valley fire is now at an emergency level and continues to burn out of control in a remote area of the Namadgi National Park. There is currently no threat to properties in Tharwa or Canberra suburbs.

The fire is travelling in a south-east direction towards Boboyan Road, Apollo Road and Top Naas Road. People in Smiths Road, Tharwa and the Orroral Valley may be affected by the fire. The emergency warning extends to people in those areas only.

The Orroral Valley fire is now at emergency level although there is no current threat to Canberra's southern suburbs or to Tharwa. Firefighters are throwing everything they can at the blaze including fixed wing aircraft and the fire is currently at around 3000 ha. Further details: http://ow.ly/d00650y6yaR

“Properties are under threat – leave now if you are able to,” the ACT Emergency Services Agency Commissioner, Georgeina Whelan, said.

“Conditions are now very dangerous and the fire may pose a threat to all lives directly in its path.”

These routes have been cleared and are being monitored by emergency services for people evacuating.

The fire is travelling in a south-east direction towards Boboyan Road and is about eight kilometres south-west of Tharwa Village and 14 km from the nearest suburb at Banks.

Southern ACT Bushfire Brigade president Steve Angus said, “There is nothing between Apollo Road to the north and Booroomba to stop it, and that is a huge lump of the country that is very rough and full of fuel. There is just nothing there.”

The size of the fire is currently about 2979 hectares. Commissioner Whelan said this figure is likely to increase and decrease as aerial intelligence captures new data. It is currently spreading at about 400 hectares every hour.

“Spot fires are likely to travel ahead of the fire, driven by afternoon winds. The fire behaviour will increase this afternoon and is spotting to the north, east and south of the fire front. Erratic fire conditions are expected to continue until 9:00 pm tonight.

“Based on spotting, topography, fuel load and the unpredictable nature that we have seen in fire activity this season, we have developed several options to address the fire situation,” Commissioner Whelan said.

Canberra is expected to have a maximum temperature of 34 degrees today, with winds from the north-west at about 25 km/h and gusts of up 40 km/h in the afternoon. The wind is expected to change to an easterly direction in the evening.

The fire danger rating today is severe, which means a bushfire will be difficult to control. A total fire ban remains in place until 31 January, with conditions expected to worsen later this week. 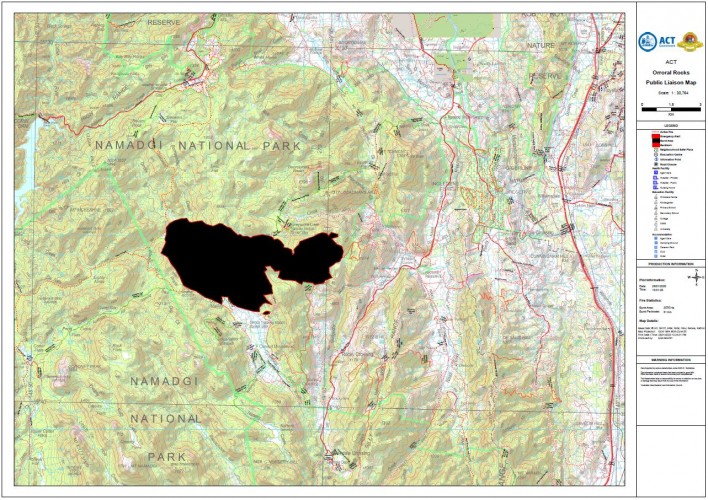 The Orroral Valley fire is approximately 9 km south-west of Tharwa Village and 15 km from the nearest suburb which is Banks. Photo: ESA

Overnight, 15 fire crews worked to subdue the fire, while members of the Australian Defence Force (ADF) and State Emergency Service (SES) worked to build containment lines. A large air tanker has also been dropping water and fire retardant on the fire fronts, which Commissioner Whelan said had proved effective at slowing the spread of the fire.

“Landholders and residents in the areas of Tharwa and the remote area of the Orroral Valley should activate their bushfire survival plans so that they know what to do if a bushfire threatens them or their homes.

“You need to start thinking now if you are going to leave or shelter in place if an evacuation warning is issued.”

Commissioner Whelan also said the ADF and SES had doorknocked 33 residents and landholders and the Tharwa area. No evacuation warnings have been issued at this stage (12:30 pm, 28 January). 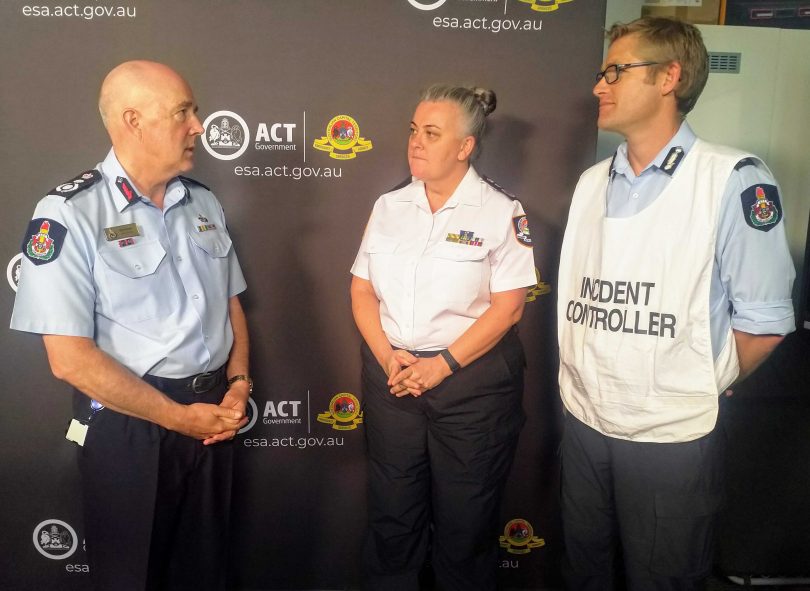 Residents in the urban suburbs of Banks, Gordon, Conder and Calwell also need to remain aware of the situation, although there is no threat to properties in those suburbs.

It is still unknown how the fire started, however the ESA could not rule out the possibility of a lightning strike or arson.

“The fire was ignited in a remote area of the Namadgi National Park which is why investigations are underway. We have been tracking lightning activity for several days now but we have limited access to those areas, but our surveillance has allowed us to get on to that fire relatively quickly,” Commissioner Whelan said.

“The fire is certainly a lot more under control than it was yesterday,” Superintendent Shonk said. “Flame heights were low overnight and the weather was benign and winds were localised. There was no significant spread of the fire in any direction. It was just a general expansion of the fire as it approached those fire trails and control lines.”

Superintendent Shonk said the rapid spread of this fire is very typical of bushfires across the country.

“It’s something we’ve seen all season across NSW and Queensland and Victoria. We are as prepared as we can be and we just try and jump on these things as quickly as possible.”

A relief centre is open at Erindale College that can accommodate people and small animals. An evacuation centre is also open at Exhibition Park for horses and cattle, although people need to be able to provide their own feed for their animals.

Boboyan Road remains closed from Namadgi Visitor Centre and south from Shannons Flat. Access to the area is restricted to residents only.

An update will be provided here if the situation changes.