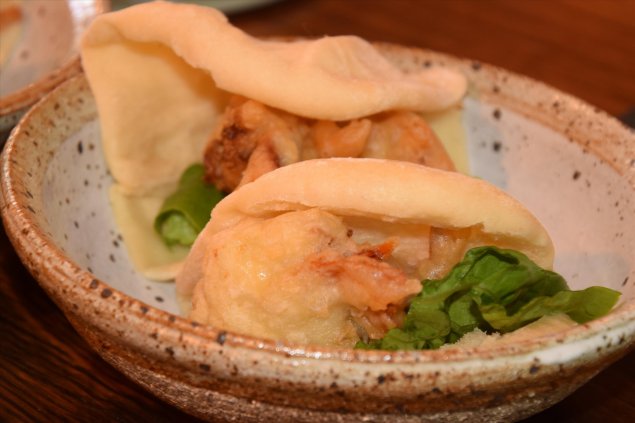 The words “eclectic electric” are printed on the back of the chopsticks at Canberra’s latest culinary sensation, Akiba, and it’s an apt description for the restaurant itself.

Owned by Peter and Michael Harrington and partner Dino Jugovac, this is a quirky and innovative restaurant that pulls out all the stops.

Situated at the former Dieci e Mezzo site in the ActewAGL building, Akiba’s fit out is warm and inviting. With recycled wood highlights from the Yarralumla woodworks, it feels almost cabin-like. The neon lights add a modern, New York brasserie touch.

The restaurant features an open kitchen and a raw bar where customers can watch the highly trained – and talented – chefs show off their skills.

In a great marketing initiative, the owners offered a free tasting of the potential final menu to the first 100 people to arrive on Saturday night. Not one for waiting in lines, I organised a table in advance. Most tables are set for four, and four people fit comfortably at each table. Akiba also has a private room for group bookings.

Our waitress (who I recognised from Hotel Hotel’s Monster) offered us a range of menu options, and we settled on six dishes, ready to be wooed.

The first dish to arrive was the kingfish sashimi with coconut, nam jim and coriander. It was delicious and a terrific starter. I often like the sensation of sashimi more than the taste, but this was really high end with only a hint of sea taste.

Next was the yellowfin tuna with organic Japanese soy and wasabi panna cotta. The panna cotta component was interesting but matched surprisingly well with the other ingredients, while I would have been happy to drink the soy by the glass.

We had ordered two dumpling dishes, and since plenty of dumpling houses have opened up around Canberra over the past few months, I was curious to see how Akiba’s compared.

At this point, one of the owners, Michael, insisted we try the kimchi and angasi oyster pancake with kewpie mayo, sriracha and ittogaki tuna. I This was the showstopper, the hands down top dish of the evening. Just amazing.

All in all, what a great start for a restaurant set to become a popular hangout for Canberrans.

Akiba’s grand opening is on Friday 19 December, but the restaurant is open for dinner (with training wheels) from tonight.

Now I am hungry !

Would have been helpful if the website has the address on it.

This place is awesome good food and not overly expensive, I noticed it was $4 for the kimchi and angasi oyster pancake, good to see new guys on the scene setting trends.

Was also there on Saturday evening. Really enjoyed the food. Tempted to go back again tonight.

Very cool. Can’t wait to try this place out.

Hans Dimpel - 48 seconds ago
Are there any local Canberra/Queanbeyan veggie garden pages or groups? I find most online stuff is international or national.... View
Opinion 73

Anna Ji - 29 minutes ago
He deserves a pedestal for his sport. His views should not impact that, especially when it's just his perceived views by one... View
Vasa Krculj - 32 minutes ago
Novak, a great sportsman and a generous human being who donated $1 mil. to the NSW bushfire victims. He must be the first spo... View
Bradley Beasley - 49 minutes ago
Vicki High He is a boofhead with plenty of money. View
Community 107

Steve Aust - 58 minutes ago
Colin Parton tell 1 story here View
Capital Retro - 1 hour ago
The letters "SM" stand for "Self Managed". It baffles me why people set up SMSFs and then pay someone else to run the investm... View
Louise Flint - 1 hour ago
James Daniels I was sent there for advice before I took a redundancy package. They ignored my superannuation and taxation que... View
News 22

Acton - 8 hours ago
The outer pine forests fueled the approaching firestorm but it was the gum trees within the suburbs that caught alight and sp... View
phydeaux - 12 hours ago
“The plantation” of 2001 is not “the plantation” of 2003. The former is now the Arboretum and some Molonglo suburbs.... View
Opinion 144

@the_riotact @The_RiotACT
You're #vaccinated and #boosted, you wear a mask, socially distance, wash your hands and sanitise, but as Zoya Patel discovered, you can do all the right things and still get #COVID https://t.co/LTSsyklfol (28 minutes ago)