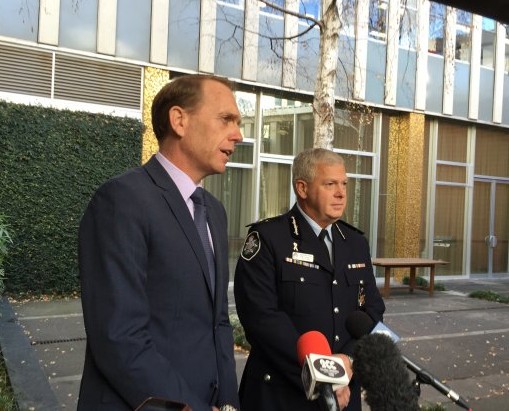 The ACT’s outgoing Chief Police Officer has today warned Canberrans of the threats cybercrime and terrorism present to the territory during a speech to mark the announcement of his retirement.

Assistant Commissioner Rudi Lammers, who will retire at the end of the calendar year, said that while the capital was one of the safest places to live in Australia, if not the world, and that the efforts of ACT Policing personnel had led to falling crime rates in the territory, Canberrans remained at risk.

“We’ve got some of the lowest gun crime in the country … People now feel safer in their homes than ever before. But there’s still a lot of work to be done,” he said.

“Cybercrime and terrorism are at our doorstep. What we do now and into the future will determine how safe Canberra remains, so we have a lot of work to do in that area.”

The 57-year-old said he had worked closely with the Australian Federal Police, police forces in others states and territories and the Australia-New Zealand Counter-Terrorism Committee on terrorism matters, “to ensure that information was shared throughout every police service and intelligence service in Australia, and indeed overseas”.

“ACT is no less affected by the possibility of terrorism than any other state and territory in Australia, so we’ll continue to prepare ourselves for that,” he said.

Assistant Commissioner Lammers, who stepped up as Chief Police Officer in July 2013, said it had been a privilege and an honour to work with his policing colleagues for more than 30 years.

Assistant Commissioner Lammers said he would continue to work hard to keep crime rates low in his remaining months at the helm, and also hoped to push through further reforms by the end of the year.

“It’ll be business as usual until the very last day,” he said.

Police Minister Simon Corbell said Lammers was one of the longest serving chief police officers in the ACT.

“Rudi is truly a Canberra cop. He’s been focused on policing here in the ACT for much of his career, and that speaks much to his love of this city and his commitment to the work of police here in the ACT,” Mr Corbell said.

“I’ve been pleased to work with him on a range of reforms such as the reform of the police pursuits policy here in the ACT, which has led to a safer policy setting that keeps police and the broader community safe around pursuits, but also his very strong leadership on issues such as tackling organised crime in the city through projects such as Operation Nemesis, and also through his more recent announcements to establish dedicated domestic and family violence teams within the Australian Federal Police/ACT Policing.”

Mr Corbell said he would consult with AFP Commissioner Andrew Colvin in coming weeks about the process for appointing Lammers’ successor, and that an appointment would be made ahead of October election so that there was clarity prior to Lammers’ retirement.

Neither Mr Corbell nor Assistant Commissioner Lammers made mention this morning of Joy Burch, who was police minister from December 2014 to 2015 and resigned after allegations against her office surfaced in a newspaper, making it the subject of a police evaluation. Assistant Commissioner Lammers announced in March that no charges would be laid against Ms Burch’s staff and that the evaluation had not been escalated to an investigation.

Jacq Miller - 5 hours ago
shame there are no longer all 4 in situ View
Barry Matson - 8 hours ago
of what? View
Michael Guina - 8 hours ago
It has to start somewhere and those two buildings are living example . View
Opinion 80

Max Kelty - 9 hours ago
Bel Lee your housing manager mustn't be doing their job then or else processes have changed. When I was a HM at HACT people w... View
William Coats - 13 hours ago
The land tax was to stop people “land banking” houses should be used as homes not stagnant investments View
Lea Powell - 19 hours ago
William Coats it takes time to change policy directions. It’s not as simple as a click of the fingers. View
News 8

bj_ACT - 19 hours ago
Yes razor it’s a good point. Agree there are pockets of Tuggeranong and Belconnen that could do with some ACT government do... View
mattm - 20 hours ago
There are almost 130 Councils in NSW, and most of them do a much better job with municipal services than the ACT Government.... View
Heavs - 21 hours ago
Competent councils - like this one? https://www.canberratimes.com.au/story/6978805/nsw-central-coast-council-to-be-sacked/ Or... View
Community 1