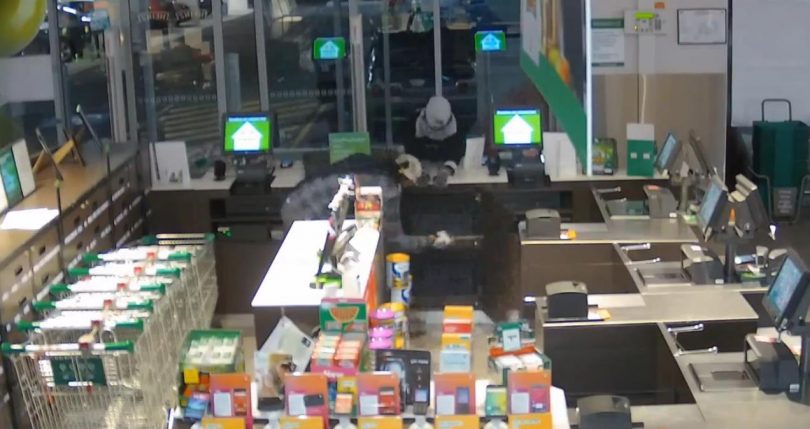 Police have released CCTV footage of two men robbing a Franklin supermarket and images of the stolen car they used in an early morning crime spree across Canberra.
ACT Policing’s Criminal Investigations team is seeking information from the public about the two men who allegedly stole a car and then committed a series of aggravated burglaries last month.

Police said that about 1 am on Sunday, 22 April 2018, a silver Nissan Skyline with NSW registration CZK15H was stolen from a residence in Franklin.

About 12.25 am on Monday, 23 April 2018, police responded to a report of a burglary at the Hughes Caltex Service Station involving the vehicle. An hour and a half later, the vehicle was used in an aggravated burglary at the Petbarn store in Majura Park, where a number of items were stolen.

Then at about 3.30 am, the two men broke into the Woolworths supermarket in Franklin and a hair dressing salon in Nicholls and stole a number of items. About 5 am, the two men were seen in the vehicle at Queanbeyan McDonald’s.

The vehicle was located and seized by police in Phillip the next day.

The first man is described as being Caucasian in appearance and on 23 April was wearing a dark, long-sleeved top with white stripes on the sleeves and waist.

The second man is described as being of Aboriginal and Torres Strait Islander in appearance and on 23 April was wearing a blue plaid, long-sleeved shirt, grey track pants and a white cap.

Ashley Latimer - 49 seconds ago
Peter Higgins vaccine efficacy and public policy are obviously going to be different depending on the virus 🙄 We don't and... View
Peter Higgins - 16 minutes ago
Ashley Latimer you’re right. You can’t. But you can compare vaccine efficacy and public policy. As I stated, their modell... View
Ashley Latimer - 24 minutes ago
Peter you can't compare 2 completely different viruses and draw a rational conclusion. View
Property 2

simm - 13 minutes ago
PLANNING the main entrance on Canberra Avenue is a sensible and practical choice . Franklin street Cafe/Retail strip already... View
abdul mutawe - 22 minutes ago
Having performed building works for Mrs Liangis over past decades, I have to say she is very astute, capable and fair. And sh... View
News 124

Lyn Kemp - 38 minutes ago
Goodbye Zed, hopefully. You've done absolutely NOTHING for the ACT 😖😖 View
Capital Retro - 4 hours ago
"Climate change, gender equity, citizenship, refugee policy, economic and cultural renewal, and a First Nations Voice to Parl... View
Shane Carter - 5 hours ago
Who-da-thunk-it, the man who’s voted against the ACT having self governance. His seat under threat from the ACT calling him... View
Community 8

bikhet - 39 minutes ago
This seems to be your thing. Never knew the pluviometers were there. Is their output available on the web somewhere? I'm a bi... View
brendan eyers - 2 hours ago
Cool to know what the cubes are, though I've never noticed one. Worth a mention that there are a hundred or so pluviometers a... View
brendan eyers - 2 hours ago
They are called standpipes. Connected to mains water and used to collect water samples for testing. View
News 2

MERC600 - 45 minutes ago
Yep , full marks to the Raven. What I would like to know is what would you pay for a coffee to be delivered by this drone mob... View
Capital Retro - 2 hours ago
The next step is to equip the ravens with lasers. Death to all drones!... View
News 2