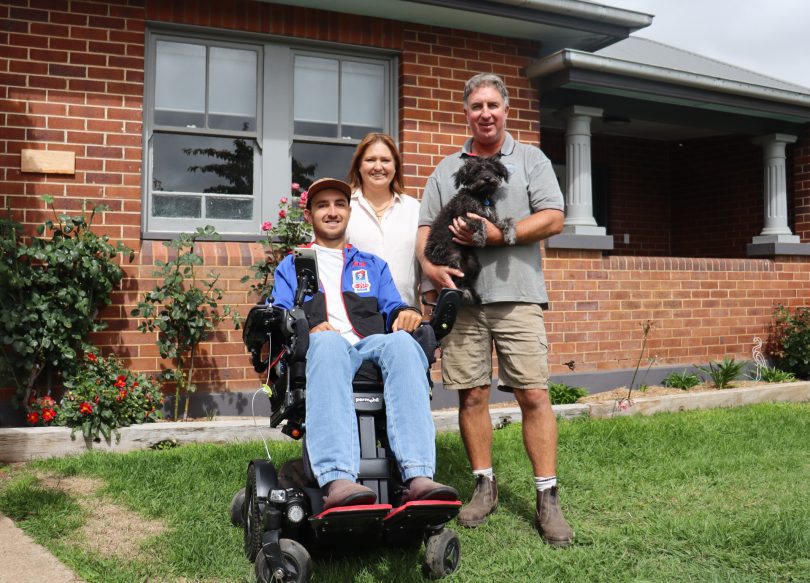 It’s already a full house when Emily and Matt Hayes arrive at their son Brad’s new home in Crookwell.

Brad, aged 21, is living independently for the first time since a 2016 rugby league accident caused quadriplegia, thanks to major fundraising efforts by his local community.

The money was raised by Brad’s team, the Crookwell Green Devils, and an anonymous donor, and has been managed by the Crookwell Community Trust since the accident.

Helping Brad to live independently are the Bluetooth controlled devices installed inside the single-storey house, which allow Brad to open and close the front door, raise and shut the blinds, and control the air-conditioning via his phone.

The house, close to Crookwell’s main street, also has a purpose-built kitchen that allows Brad to cook for himself or his housemates, who include brothers Harry and Charlie, and puppy Jimmy.

Emily says Brad is enjoying more freedom in his new home and that having two family members nearby has made the transition easier.

“We noticed his mates weren’t visiting as often because it was our house and with his extra functioning,” she says. “He would like to cook but couldn’t get into my kitchen so it got to the point where we would have to convert a lot here [the family home] if he wanted to stay, but it still wouldn’t have been ideal.

“He didn’t want to move to begin with because this was his safe space so it was all very scary. We questioned if we were doing the right thing the whole time we were doing the renovations. But since he’s moved in, his mates visit more and he’s able to be more of a 21 year old.”

Brad was only 16 when he was playing rugby league in the nearby town of Harden and sustained spinal cord injuries that meant he had no movement below his chin.

He stayed in the specialist spinal unit in Prince of Wales Hospital in Sydney for six months before returning to Crookwell Hospital and eventually home with mum and dad.

Since then, Brad has undergone nerve and tendon transfer surgery which has returned movement to his arms. He has also received a handgrip that moves his fingers.

It’s been a long journey involving round-the-clock care and physiotherapy four days a week. However, in between, Brad has also been working hard to regain his independence by learning to drive and helping to teach at the local Catholic school.

Driving was important to the boy who was on wheels from the age of two when he first got a motorbike, says Emily.

In fact, Brad had bought a ute and was hoping to get his P-plates not long before the accident. However, configuring a van and finding a driving instructor for Brad’s needs was no easy task.

“To begin with, we had to get him approved for a licence, then we had to get all the occupational therapists’ reports, trials in vehicles – which there aren’t many of in Australia – and then there was a bit of guesswork in getting it set up personally for him,” says Emily.

The van took at least 13 months to build and is now worth $209,000 following all of the configurations, including an automatic ramp and door.

Fortunately, funds collected by the Crookwell Community Trust were able to cover the difference between the funds provided by the National Disability Insurance Scheme (NDIS) and the total cost.

Since learning to drive, Brad has begun the training to become an education assistant at St Mary’s Primary School in Crookwell. He’s close to completing the Certificate III in Education Support and will begin the Certificate IV this year.

“All the kids think he’s cool, which has helped him to feel more accepted, and it’s given everyone at the school more of an education on disability,” says Emily.

Now, after 18 months of renovations completed by Matt, who is a builder, Brad can add moving out as another feather in his cap.

Brad’s only request during the renovations was that the house looked normal, and Matt has achieved that by making the ramps and paths look modern and seamless, as well as installing what every 21-year-old couldn’t refuse: a widescreen television.

The builders have also recently finished converting an outside shed into a gym where Brad can continue his physiotherapy.

If the house is ever sold, the money will return to Brad, and Emily hopes the remaining funds will assist him to enter a stem cell trial in Queensland.

“It’s been amazing to have the money there and there’s still a bit more if something else comes up,” she says.

The Crookwell Community Trust provides emergency funding to local residents and usually keeps its donations confidential. However, given the personal nature of this donation, it wanted to share how the community’s funds have helped Brad and his family.

Brad is an amazing young fella who is living a full life. His family and friends are s wonderful support as is his footy team. All the best to Brad. 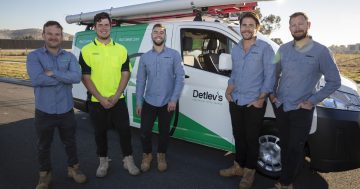