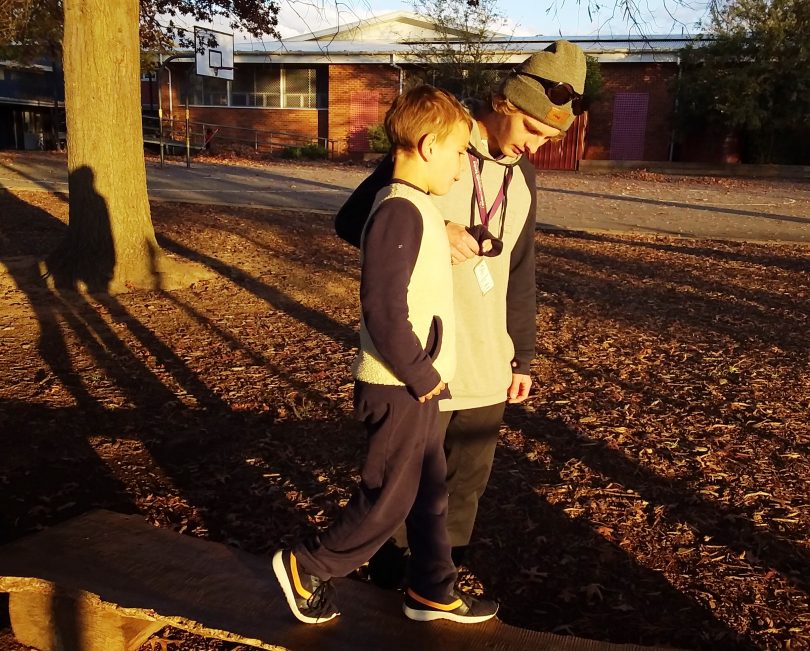 Educators from Out of School Hours Care (OSHC) services and parents were both thrown a lifeline by Woden Community Service during the COVID-19 lockdown.

Schools moved to a home-based online learning environment on 24 March, leaving some parents with no alternative other than to work from home or take leave to look after children and help them learn online. At the same time, OSHC casual workers faced the prospect of applying for the Youth Allowance or JobSeeker payments.

Woden Community Service employs around 100 people as casuals in OSHC services, and immediately offered to match parents who needed babysitters with their OSHC staff. Thirty families made contact with the service and 18 were matched with a babysitter from the ranks of the out-of-work OSHC staff.

While most families needed only a few hours of care each day during school hours to help children with online learning, in some cases both parents were essential workers looking for full-time help. On average, the OSHC staff were able to pick up 10 to 15 hours of work a week during the COVID-19 lockdown. 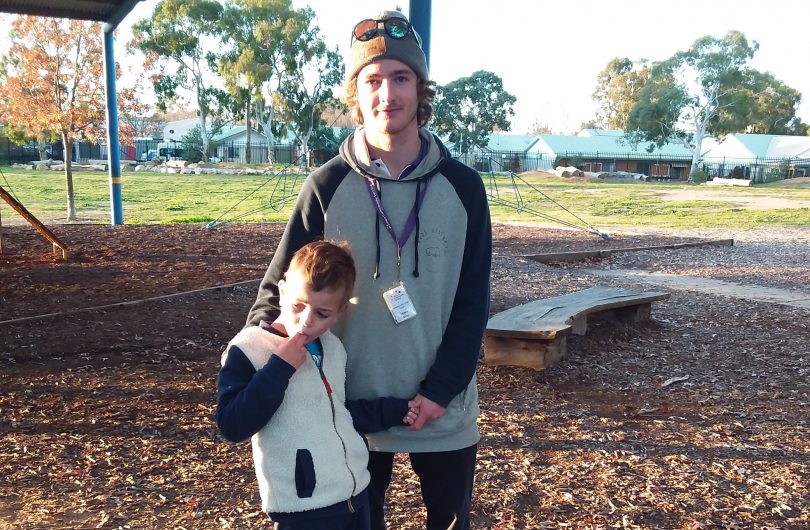 Gillian Bradford is one of the parents who used home-based work, but needed a carer familiar with her son, Lachlan, who is nine years old and has special needs. She received an email alert about the WCS’ babysitting service and called to find if there was a person familiar with Lachlan from the OSHC team she could hire to help care for him.

Lewis Grey is taking a year or two off before he attends university to study environmental science, and is a former attendee of similar program himself. He says he wanted to spend a year giving back to the community, and met Lachlan about 18 months ago at after school care, and knew it was important to ensure Lachlan felt included.

“I heard someone at WCS was putting a list of casuals together to do some babysitting while we were in lockdown,” says Lewis, “so I put my name on the list.”

Before long, staff at OSHC realised Lewis and Lachlan knew each other through the program, and Gillian was in contact with him about doing some work with Lachlan during the shutdown period. Lewis became one of the casual workers employed through the initiative.

“Lachlan likes the sun,” he says “so I can take him outside to play, and I’m with him a bit at OSHC. It’s important that he has fun just like all the other kids,” says Lewis. “He’s gone back to school now, but I’ll see him at our usual after school program,” he said.

“It’s really important he has a good time, we all make sure he’s included,” said Lewis.

“To find someone who is a young man, who is so capable, to be responsible for someone so young and non-verbal,” says Gillian, “is amazing. To have young men in our community who are so confident and capable and to have Woden Community Care, who believe in inclusion, I can’t tell you what it means to parents of children with special needs.”

For more information about the Out of School Hours Carer program, contact the Woden Community Service on 6282 2644.

Katie Licciardo - 17 minutes ago
Have lived in queanbeyan for years and still have more anxiety walking to my car late at night in Dickson then going for a wa... View
Valerie Foster - 5 hours ago
This is a problem when a city expands the crime rate goes up. View
Erika Olivier - 7 hours ago
Reality is crime is everywhere, the fact they picked her is bad luck... View
News 19

Ross Jet Mccabe - 31 minutes ago
Paul Monger That was probably the only good thing that they have introduced. View
Jackie Hattingh - 33 minutes ago
On the other hand they trample and destroy habitat, causing erosion and water run off - drier = fires View
Dot Willcoxson - 1 hour ago
Di Hunter and the rubbish they leave behind. View
Food & Wine 113

Jeffrey Brown - 2 hours ago
Ahhhh those were the days. Standing in the queue and watching the odd brawl of dudes trying to prove their worth. Was normal... View
Kim Rumble-Kozjak - 10 hours ago
Yes!!!!! Our kids have no idea! View
Property 13

Brian Myerson - 6 hours ago
Your article does not mention that every person in Canberra should be extremely proud that almost every year they achieve one... View
Property 17

Shane Westmore - 7 hours ago
parking outside Woolies is all 2-hour paid, it's guaranteed this'll be the same... Coles will love turning that area into a m... View
Hillbilly - 8 hours ago
Totally overdue. God, what a dump Dickson shops are. Filthy and wholly inadequate.... View
Opinion 3

Charlie Karmenu Flask - 7 hours ago
All the Canberrans that voted for Barr deserve everything they're getting...unfortunately the rest of us have to go along wit... View
John Elliott - 7 hours ago
Ha ha ha that's hilarious. I never had any friendship with this current Labor mob so there's nothing to stretch 🤣🤣🤣 View
Janet Ilchef - 9 hours ago
A government’s friendship with voters? Since when are we friends with governments? View
Community 15

Bec O'Brien - 10 hours ago
It's been closed for a few weeks now. I travel to Dalmeny for work every week from Canberra. Thought it was odd. View
show more show less
*Results are based on activity within last 7 days

It’s a rookie mistake, and one I instantly regret. As I join my friends at the dining table at Burns...
News 24

It's time for ACT Government to take another look at the e-scooter hire scheme as the brightly coloured devices litter...
News 24

@The_RiotACT @The_RiotACT
ACT Policing has located the body of a 21-year-old man adjacent to Paddy’s River Road. ACT Policing says the incident is the first road fatality of 2021 https://t.co/h37d0FswAa (2 hours ago)

@The_RiotACT @The_RiotACT
A housing shortage in Yass means people seeking accommodation are finding themselves locked out of the town’s rental market https://t.co/CDuQ5Hbc4S (2 hours ago)

@The_RiotACT @The_RiotACT
Hannah Quinlivan is the creator behind the distinctive art along the light rail line. And there's a story behind each unique panel https://t.co/6fYF0Xtc3M (4 hours ago)