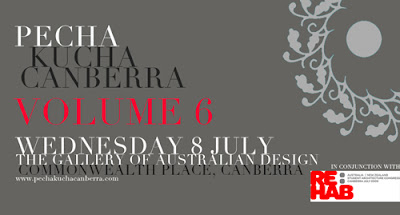 It’s the event where Canberra’s young luvvies do their luvvying thing. It’s returning for the sixth iteration on 8 July and it’s also calling for people who have something they want to show off.

Here’s what they had to say:

That’s right- numerically correct, thoroughly excitable and prone to flush turns of phrase, Volume 6 is a co-production between us and the folk who for the last 700 hundred years have been working to bring you Re:Hab, the Student Architecture Congress, an event we’re very lucky to have in the Capital, running between the 5th and 10th of July and featuring a ridiculous assortment of treats- check it all out here.

At the centre of Re:Hab will be our very own little PKC, this time taking place at the brand spanking Gallery of Australian Design, – we’ll have the usual for you- inspiring presentations, cheap booze, freebies, music, laughs, maybe even a technical hiccup or two. Though, after last time, we’re keen to avoid such entertaining errors.

This can only mean one thing- Submissions are open! Although the whole week will have an Architectural current running through it, Pecha Kucha will remain wilfully eclectic- so, if you’re a maker, facilitator or agitator, send your submission to us by 1 July 2009- guidelines for submissions can be found here.

Gerard McMahon - 57 minutes ago
How about building a new Kings Hwy like we have needed for many years. Bypass Bungendore and Braidwood and save the trees? View
Jesse Clarke - 14 hours ago
So that'll be nice and windy through there once them trees are gone it will look like barron land just leave the things alone... View
Robbie Munday - 14 hours ago
I am assuming they will be replacing them with saplings BEFORE they cut the old guard down? View
Sport 15

John Elliott - 7 hours ago
In these circumstances YES it is worth watching. View
James Strang - 8 hours ago
A packed house adds so much to the game, almost regardless of whether you're there or watching at home. Will certainly be wat... View
Ben Jones - 9 hours ago
It will be like watching a Brumbies game from last season then ..... View
News 8

Lynn Stape - 8 hours ago
I believe the rationale was the size of the venue which automatically set how many could be in that venue... It isn't like a... View
News 9

Guy Manton - 8 hours ago
Don't know why she claims she doesn't fit into standard liberal party box. All her positions are the exact same as the existi... View
John Moulis - 10 hours ago
I've been a lifelong supporter of the Coalition parties but after reading this I now go on record as saying Vote Labor. View
Monty Ki - 14 hours ago
We really need to be voting for progressive, inclusive and evidence-based, rational and logical politicians. While they are f... View
News 31

astro2 - 10 hours ago
The problem with not having any residences there, as part of the overall plan, is you end up with a dead (and creepy) space a... View
News 23

Max Leonard - 10 hours ago
That is ridiculous. The Sydney Melbourne air corridor is the second busiest in the world. Of course we need HSR. The Grattan... View
News 20

Ben Garden - 15 hours ago
Lol. Come on. With the trend upwards of temperatures this will never be viable. Snowfall levels in Australia are already marg... View
Angela Van Dyk - 19 hours ago
I hope there will an open air ice skating arena ⛸⛸⛸ View
Food & Wine 6

Kathryn Ross - 16 hours ago
Kayla Hammond we need to go back there! View
show more show less
*Results are based on activity within last 7 days

A man has died after a suspected drowning at Batemans Bay on the state’s south coast. Emergency services were called...
Breaking 0

An ACT woman has been charged over a collision near Crookwell last year that resulted in the death of a...
News 19

While many restaurants identify with their customers via websites and social media posts, the owners of Leong Kitchen know their customers...
Best of Canberra 148

@The_RiotACT @The_RiotACT
This week we're asking about the ACT's new frontline services assault laws. The offence appears on criminal records, but the sentence is the same as common assault. Is this enough when frontline service providers risk their lives? https://t.co/KxEeYCpznE (37 minutes ago)