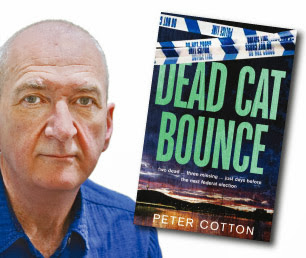 A federal election campaign is thrown into chaos when a popular government minister goes missing and then turns up dead on the shores of Lake Burley Griffin.
With Detective Darren Glass and the Australian Federal Police on the case, the investigation into the minister’s murder quickly becomes entangled in a game of high-stakes politics. And all the while, the body count mounts.
Glass’s suspects include some of the most powerful people in the land. With the nation in shock and wanting answers fast, Glass has to negotiate a murky world of shifting allegiances, half-truths, and finger pointing, where everyone has a motive for murder.
And no one is safe — not even the prime minister. As election day nears, Glass risks everything for a breakthrough in the case, and his life is soon hanging by a thread. But if he thought he’d hit rock bottom, he was wrong …

‘With an insider’s knowledge of politics, and a journalist’s feel for a story, Cotton has produced a firecracker of a novel.’ Robert Gott

‘Australian politics has been pretty weird lately,but this book proves conclusively that truth is not stranger than fiction. An election is the background for kidnap, murder and mayhem in this nail-biter. Canberra’s corridors of power become the mean streets of crime fiction.’ Laurie Oakes

Peter Cotton has been the media advisor to three federal cabinet ministers, worked as a foreign correspondent for the ABC, been a senior reporter on the ABC’s AM and PM programs, and had stories published in most major print outlets in Australia. Dead Cat Bounce is his first novel.

Scottie Roberto Avelia - 7 minutes ago
Hardly zero emissions when you consider the lifecycle (which the Earth does)... These lying claims make morons feel good but... View
Food & Wine 20

Heidi Dreyer - 10 minutes ago
Zak is back working so any night but Sunday or Monday. Miss you too!!!!... View
Faith J. Humphries - 33 minutes ago
Laura Shelley want you go to lunch there with me? View
K Jane Brook - 41 minutes ago
Heidi Dreyer I'm in. Any day but Wednesday. Miss you. View
Opinion 54

Julie Macklin - 17 minutes ago
Vicki Nunn No, no, my shoes need their soles 😮. View
Scottie Roberto Avelia - 23 minutes ago
What we need are MORE bikie gangs, the SIX we have just aren't peddling enough drugs and gun crime, leading to more hi-speed... View
Marc Edwards - 26 minutes ago
Robert Hawes the average block for a sin feel is like 350m2 which is tiny as. View
News 2

Mai Linh - 29 minutes ago
Lynn Stape you don’t have to. But many others do because we’re a multicultural society, because there’s a vibrant Ameri... View
James Shaw - 3 hours ago
Lynn Stape because some people are American?... View
Property 3

Gabriel Spacca - 54 minutes ago
Pretty sure he is not the target demographic for TikTok. View
Larry Appley - 1 hour ago
A publicity stunt from a former radio announcer? Who would have thunk? View
Nathan Lofthouse - 2 hours ago
Why is it the tinfoilhat mob always say 'do some research' I don't need to research tiktok. its tiktok. I expect everything o... View
Property 25

Overdevelopment in Canberra is shaping up to be a key election issue after it was revealed that the lion's share...
Community 24

Travelling overseas is off the cards for a while yet but tomorrow (1 July) you can experience a little slice of...
News 20

@The_RiotACT @The_RiotACT
Just days from the Eden-Monaro by-election, what is motivating voters? Region Media’s journalists asked people across the electorate about the issues that would sway their votes https://t.co/KPzWiwk20n (28 minutes ago)

@The_RiotACT @The_RiotACT
@NatGalleryAus is having a mega-clearance sale and it's your chance to pick up memorabilia from great NGA exhibitions as well as spectacular pieces from local artists https://t.co/iA3TbWyTff (1 hour ago)

@The_RiotACT @The_RiotACT
There’s something to suit everyone in our top picks of things to do this weekend, from music to dance to trivia to gardening https://t.co/MhJpvE9Igk (2 hours ago)