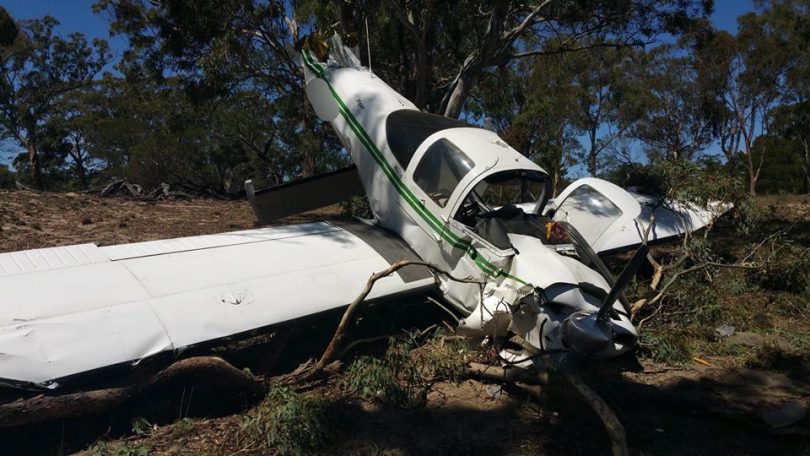 A 49-year-old pilot’s escape from the crash of a two-seater plane near Bungendore on the weekend has been hailed as “nothing short of a miracle”.

Emergency services were called to the crash site at a private property on Currandooley Road, north of Bungendore, about 11.20 am on Saturday (23 February) where they found that the pilot had already removed himself from the smashed plane.

“The pilot got himself out which looking at the scene is nothing short of a miracle,” said the Bungendore Rural Fire Service in a Facebook post (shown below).

We are currently on scene at an aviation crash north of Bungendore village. The pilot got himself out which looking at the scene is nothing short of a miracle.

A NSW Police spokesperson said it is believed the aircraft, a Piper Tomahawk, had taken off from a private property when it was forced to make an emergency landing.

“The aircraft landed in a paddock on another private property on Currandooley Road,” the police spokesperson said.

“The 49-year-old male pilot was taken to Queanbeyan Hospital with non-life-threatening injuries.” 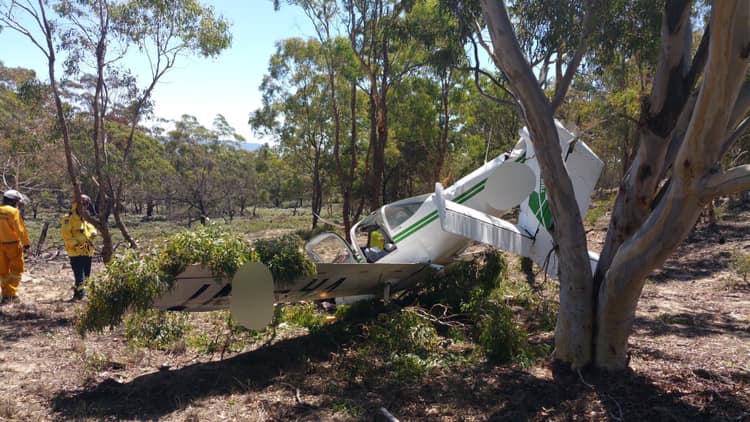 The Civil Aviation Safety Authority said the plane crashed after clipping a tree.

A NSW Ambulance spokeswoman said that three ambulances arrived at the scene after being called around midday and found the pilot walking around.

The spokeswoman said the pilot was transported to Queanbeyan Hospital where he was treated for a chest injury, as well as suspected head and hand injuries.

Queanbeyan Fire & Rescue also attended the crash and said in a Facebook post that around 20 litres of aviation fuel were spilt in the accident in which the pilot “was able to self-extricate before the arrival of emergency services with minor injuries”.

A spokesperson for the Australian Transport Safety Bureau told Region Media that the plane crash has been reported to the bureau and it is in the process of gathering further information before making a decision about whether a formal investigation will be conducted.

Indeed he was very lucky. Others have not been when flying in that area when high winds from above the Lake George escarpment cause downdrafts.

Fergus Thomson - 6 hours ago
Bek Clark I dunno about that, but after a series of operations, nurses are my heroes - I couldn't do what they do daily (incl... View
Bek Clark - 13 hours ago
Absolutely. They should get that just for having to work with doctors. View
News 24

Paul Conn - 7 hours ago
Glenys is a great manager and one of the nicest senior colleagues I ever had the fairly brief pleasure to work with. View
Deborah Gale - 8 hours ago
A great boss and a nice lady. View
Karen Baldwin - 12 hours ago
Tania Parkes yep, me too View
Lifestyle 22

Sean McGrath - 8 hours ago
They are a gimmick and will 66 soon vanish like a Footsal pad. View
Arleen Stark - 12 hours ago
Considering the lonely scooter I see every day abandoned all over the city, I reckon it would take days, not hours, to find t... View
Teagan Erin - 21 hours ago
Shelby inside anu residences 😂😂 View
Opinion 96

jwinston - 18 hours ago
Let them go because they are under 14 and don’t know what they’re doing. View
News 32

@The_RiotACT @The_RiotACT
Canberra's rock band Hands Like Houses is breaking free of their four walls for a national tour. We caught up with them on the road this week https://t.co/ojiymijMfp (7 hours ago)

@The_RiotACT @The_RiotACT
A beautiful diamond with a few rough edges… meet Nala, a beautiful, boisterous pooch who is at @rspcaact waiting to find the perfect new family https://t.co/Zs2Jwv8S8c (8 hours ago)

@The_RiotACT @The_RiotACT
The lovely four-bedroom, two-bathroom family home in Amaroo is ready & waiting for a new family to move in and make memories https://t.co/B659msa69u (9 hours ago)