Let us take your development
to the next level.
20 January 2023 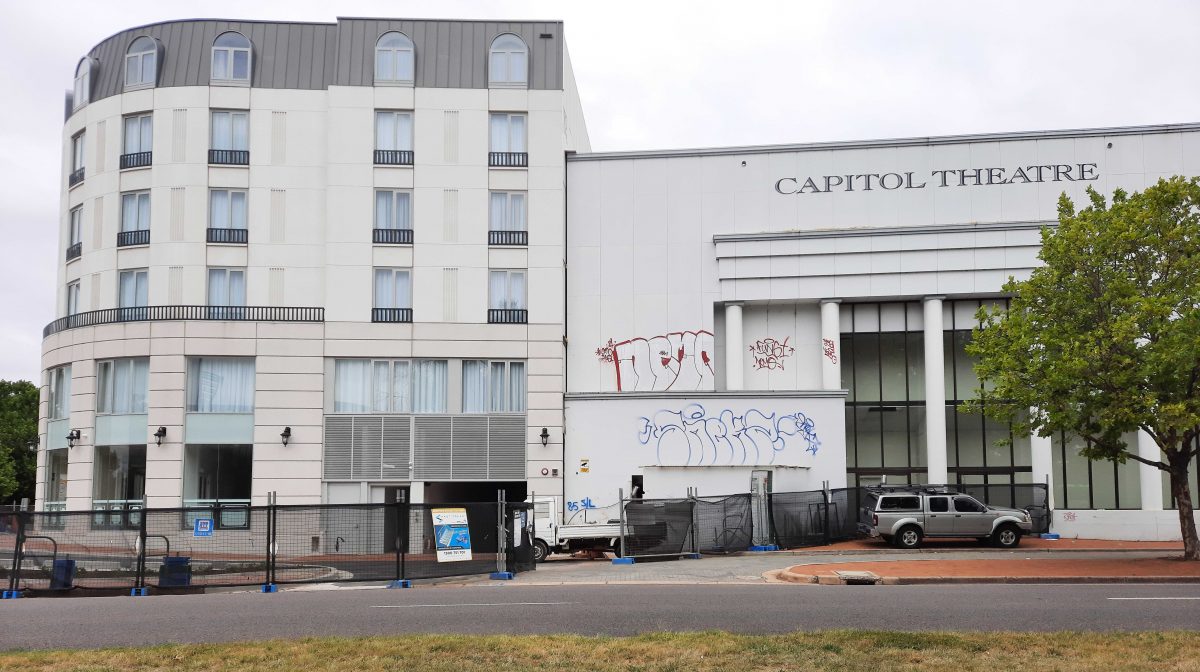 A clash of old and new in Manuka: the old Capitol Theatre building marked for demolition still abuts the new stage one hotel. Photos: Ian Bushnell.

Stage two of the Manuka Hotel project is being strangled in red tape and might never make it through the planning process, the developer has warned.

The fenced off Capitol Theatre building bounded by Franklin Sreet, Furneaux Street and Manuka Circle/Canberra Avenue, has lay idle for years, while the first stage is proceeding to completion.

The proposal for a six-storey building with 120 rooms, ballroom, dining and bar facilities, multiplex with five cinemas, and groundfloor shops and restaurant was approved conditionally in July 2021 but it has since been tied up in disputes.

Seven years since first proposing what was meant to be an iconic development in 2016, developer Sotiria Liangis said on Wednesday that she was fed up with all the delays and red tape and that the second stage of the project might never proceed.

She said the process had been exhausting and she might choose to update the theatre building and lease it out instead.

The project had been dogged by bureaucratic delays marked by inconsistent and contradictory advice, lack of continuity in staff dealing with the project, and agencies not talking to each other, Mrs Liangis said. 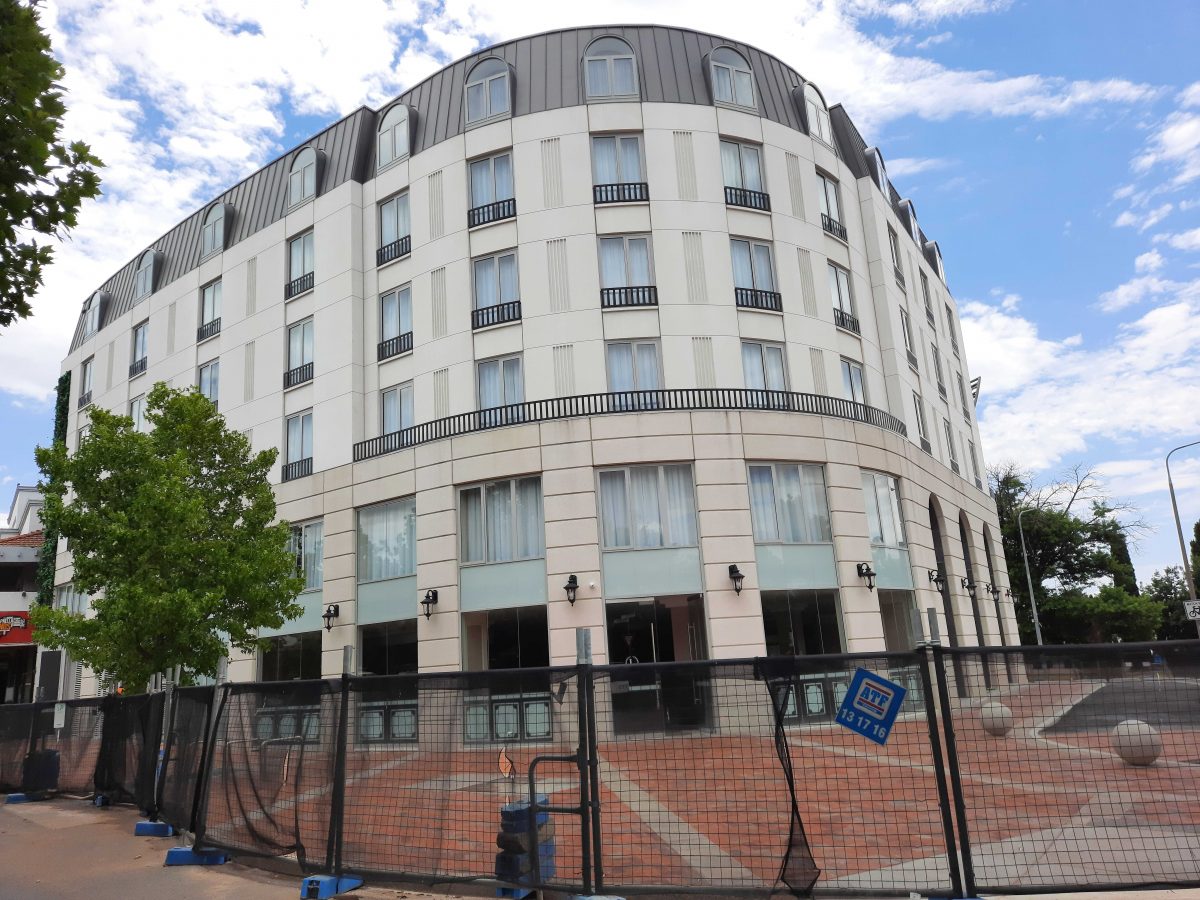 Although a dispute about an approval requirement for an entrance on Manuka Circle had been resolved, there had been one issue after another, the latest being the amount of lease variation charge to be paid.

The six-storey, 58-room first stage on the Flinders Street end of the block remains fenced off although a paved footpath, access road and landscaping has been completed.

Mrs Liangis could not say when the European-styled building would open, indicating the stage two impasse was holding up its progress.

A Planning and Land Authority spokesperson said the 2021 stage 2 conditional approval went to the ACT Civil and Administrative Tribunal (ACAT) where the matter was mediated, with ACAT varying some of the conditions on 11 February 2022.

Under the terms of the mediated conditions the Crown lease must be varied, including the payment of any lease variation charge.

“The Authority is currently engaging with the Lessee to finalise the determination of the lease variation charge,” the spokesperson said.

The property industry has longed call for reductions in lease variation charges, which are assessed on the improved value of the land due to the change of use.

Inner South Canberra Business Association chair John-Paul Romano urged the ACT Government to do anything it could to expedite the approvals process for stage two of the project, which would drive the rejuvenation of the Manuka shopping precinct.

“We want to see that development happen,” Mr Romano said.

“We’re talking hundreds of hotel rooms, with new customers every day who need to have coffees, who need to eat breakfast, lunch and dinner and will shop most likely in local shops.” 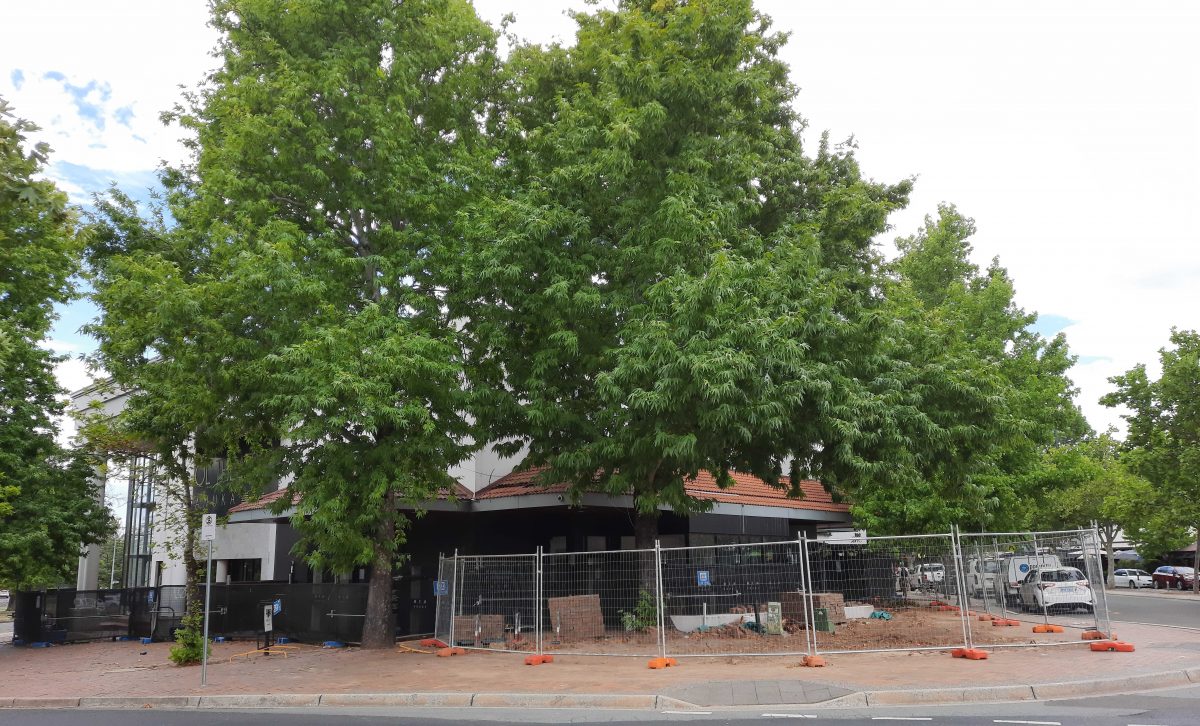 He said the old theatre site was not a good look for the precinct.

“It’s certainly a detractor to have an abandoned building with no active frontages there,” Mr Romano said.

But the new stage one hotel building was a great development, he said.

“They’ve just got to get on with opening it and activating it because that’s what will bring people to the area, new money, economic growth and development not just to Manuka but all of Canberra,” Mr Romano said. 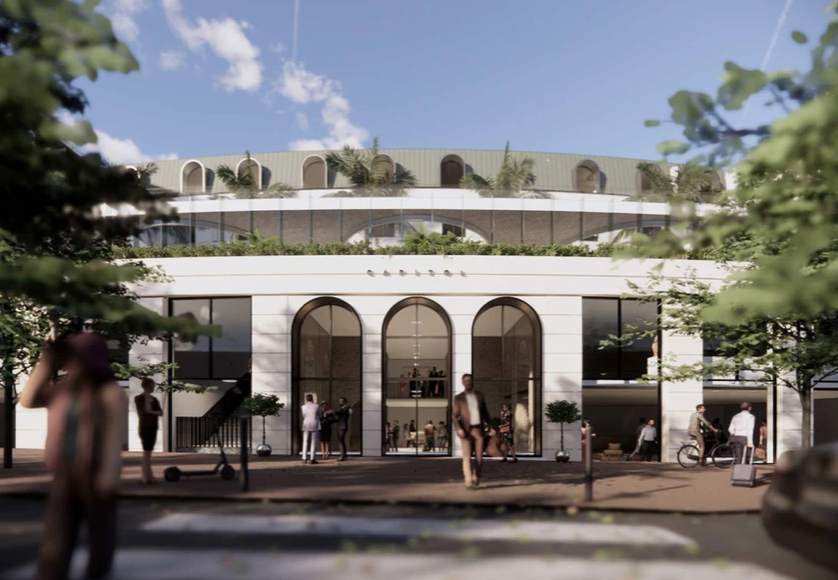 The project has not been without controversy. In 2019, a large London plane tree that had sprung up between buildings held up stage one until the Liangis family went to ACAT to challenge a decision by the conservator of flora and fauna, Ian Walker, to maintain its protected status.

It was agreed the tree could go if the family supported local Landcare groups and included a ‘green’ wall in the hotel project.

The Capitol Theatre cinemas closed their doors at the beginning of the COVID-19 pandemic in 2020.

“The project had been dogged by bureaucratic delays marked by inconsistent and contradictory advice, lack of continuity in staff dealing with the project, and agencies not talking to each other, Mrs Liangis said.”

Whether you think this development is wonderful, or dreadful, or couldn’t care less about it, this is the real issue here. These comments will ring true to many people who have had dealings – beyond the basic transactional stuff – with the ACT bureaucracy over the years and by no means just in the planning and development area.

From time to time, all bureaucracies – public and private – are susceptible to these problems, but the ACT public sector does seem to have turned it into an art form (almost like a permanent homage to Yes, Minister) and it is hard to see that the people elected to have authority over that bureaucracy have the slightest concern about what is going on.

Mrs Liangis has contributed positively to this city for over 50 years. This has been through her businesses, construction and philanthropy. She is a businesswoman and a lady.

Would it be a pressure strategy to make or let the old theatre look as crappy as possible – we need to follow the proper and lawful process. Some developers have a history of seeking out benefit at the cost to the wider community.

Why hold back progress & jobs.
Ms Liangis is a successful developer that should be treated much better than she is with this project.

Wow it really has been ages since I have been to Manuka. Didn’t even realise a hotel was being built there lol

This happens a lot in that area to the annoyance of developers and people who want progress. Manuka oval improvements was another obstacle a few ago. Some sandle wearing long hair group with signs using recycled timber and paper were going on protesting against a new stand or something. Generally progress is stalled with these type of demonstrations and in the end, it dwarfs growth for canberra as a great city.

You do know that the redevelopment of Manuka oval and the surrounds was actively lobbied against by the people who lived in the area right? Arguing that the increased foot traffic in the area would ‘be a nuisance’. So, not so much ‘Greenies’ stopping developmental progress in Manuka as people sitting on generational wealth not wanting their property prices to take a hit.

the Capitol theatre must be the ugliest building in Canberra

Let the site rot – If there is too much red tape the developer should just walk away and leave it to its current beautiful glory. There comes a time when you should be able to remove a public eyesore.

Good. I am glad the ACT Government is holding firm by established rules and processes and not bowing to these bullying tactics. Upgrading the theatre sounds like a great outcome – it just doesn’t make her as much money.

Totally agree! It’s all well and good to complain about ‘red tape’ but planning rules usually have a reason such as disability access, adequate parking and safety. They are needed to get a good planning outcome. Have developers with deep pockets used similar tactics elsewhere? Refuse to comply with legislated planning requirements and hold out long enough for everyone to get frustrated and pressure the government to give in. 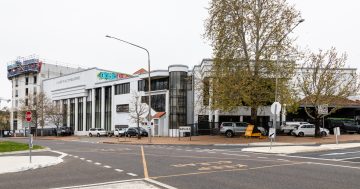 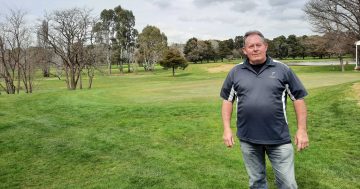 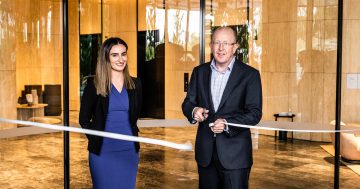 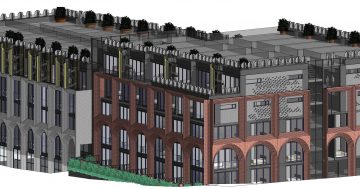