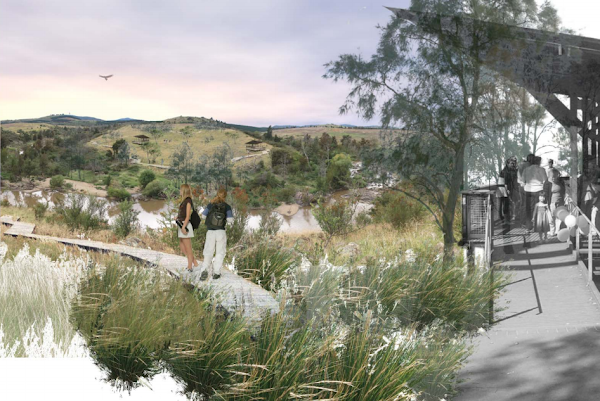 “With residential development in the Molonglo Valley, the Molonglo River corridor will be a central feature for protecting the local environment while adding to the amenity of the Valley for new residents,” Minister Rattenbury said.

“The ACT Government has allocated $6.4 million toward the planning and development of Molonglo River Park, a 650 hectare park located along 13 kilometres of the Molonglo River downstream of Scrivener Dam.

“In 2011, a concept plan for Molonglo River Park was prepared providing a vision for the corridor which balances conservation, recreation and other management requirements. Planning for the first stage of the Park is now underway.

The first stage of Molonglo River Park will be developed adjacent to the suburbs of Coombs and Wright on the southern side of the Molonglo River (the Coombs Riverside).

A draft Preliminary Sketch Plan has been prepared for this section outlining priority work for the Park including environmental protection measures such as fencing to protect Pink-tailed Worm-lizard habitat; fire protection measures; and preliminary recreational infrastructure such as the development of a cycle path and equestrian trail.

“Longer term recreational infrastructure for the Coombs Riverside is also highlighted in the draft plan including walking tracks, picnic facilities, lookouts and pedestrian river crossings. The Molonglo River Park will be delivered in stages over many years as the population of Molonglo Valley grows.”

Time to talk have started their engines and ESD have plans.

Good to see that they’ve acknowledged the Wedgetailed Eagles that live in the area encompassing the river – but I think that sadly we won’t see them anymore once the McMansions are jammed in as close as possible to the river parkland.

These birds have been in this area for quite a number of years, but actually roam across an area from Mt Painter and the Pinnacle to the river looking for prey and establishing roosting sites, so one all that open grassland has been built over I can’t see them being able to remain there.

Jezus, have a whinge, here & in the the Tuggeranong Lake foreshore thread, can you people find nothing positive in anything?

Wildturkey, if you had taken the time to walk or ride along that stretch of the Molonglo you would see that there is a sheer drop about 6″ from the fence that lines the bike path.

The 3m of land that used to house the cycle path is washed away right to the retaining wall for the road.

I suspect the delay is not repairing the track but working out how to stabilize the area as if they don’t, the next big flood will wash the road away.

Those strangely monochrome people on the right there are being followed by a reptoid child with no face. How can we warn them?

Sorry I’m double posting, I almost forgot to say it’s ironic that the name at the bottom of every page of the Gov website pertaining to this is by a guy/girl called Hassell. Must be a bit of a hassle organising the river to do what it isn’t supposed to – be a tourist location.
I still wonder how much was spent on all this planning when a bike path at the top of LBG is still incomplete after the floods and we are still limited to 60km/h on the road adjacent. I mean, how long does it take to fix stuff nowadays???? Grrrr, I’m angry. Yet, in 20 minutes I will be calm again…..thanks beer!

I would love to visit places like “Sludge Pit Park” and “Misery Point Park”. Great names. As for the rest..Pioneer, Town,Gateway and Point Park, you get an F- for creativity. What kind of people are we leaving to design and plan this city of ours. I am ashamed at what could be so better thought out and designed. I especially think that designing a community around what is pretty much a flood plain, channel or stinky bog hole is just crazy. If you can’t get people to go swimming there now, what are the chances when you name it aptly?

Looks like they were using Apple Maps when they put that boardwalk in. certainly wouldnt want to try riding my pushie along that!

And of course the next time we get a La Nina weather pattern (climate change permitting) it will all get flushed down river. And speaking of the river, will there be any river left after its all been drained out to stop the dust obscuring the work of all the wonderful environmental vandalism (umm sorry road bulding and suburb development) they are undertaking. I wonder if the producers in the Murrumbidgee Irrigation Area are noticing any downstream effects on available water levels? Sorry it was a bad but literal pun but I couldn’t resist.

Notice everyone: ‘the development of a cycle path’ was mentioned. Time to start yet another rigorous debate on the pros/cons of cyclists (we’ve only had about 3 this month – by day 8!). Actually, i’m sure if every cycling thread was combined each month, cycling bitchfests would cover the Mulley cup! hahahaha!

..and look out for Pink-tailed Worm-lizards when you are out there terrorising everyone on your pushy.

Bronwyn Tolley - 2 hours ago
Karin Hagel Prince Phillip at Buckingham Palace, July 20th 1969. The day man landed on the moon ! View
Tig Beswick - 5 hours ago
Robyn Lynette Pierce - when I was a little girl, I went to the NSW Governor General’s house because my dad had been invited... View
Karin Hagel - 5 hours ago
Kylie Chance - if you read the article they say he has info on where to find a Hemsworth. Jugiong isn't far away... could sti... View
Business 36

Conor McNamara - 5 hours ago
Michael Wittman Ironic, coming from a wannabe SS. View
Aaron Still - 7 hours ago
Rob Thomas clever way of putting it 👍 View
Gem Gemm - 9 hours ago
I am so utterly dumbfounded that people are upset over this? Like water is wet. It's absolutely a micro aggression and subtle... View
Opinion 9

Áine Ní Tighearnaigh - 6 hours ago
Its good to draw attention to the poor maintenance practices of big bureaucratic systems running housing. I can provide accur... View
What's On 9

Louise Saber - 6 hours ago
Meg McLoughlin next time you are heading to Willinga Park let me know! View
Opinion 66

Shaun Cummins - 8 hours ago
Even a bee is noisy! View
lakefly - 10 hours ago
Rather than expansion, it should be shut down. These drones are not quiet at all. What real benefit do they really bring. Why... View
Daniel Oyston - 11 hours ago
Cue outrage ... View
News 2

retep - 10 hours ago
With concrete a substantial source of environmental warming gases I would think the ACT government would be all over this. No... View
chewy14 - 11 hours ago
BJ, The developers build what the market tells them too. If there wasn't a demand for the units they are making, they wouldn'... View
News 8

Peter Marshall - 11 hours ago
Since just before the 2019 NSW election. View
show more show less
*Results are based on activity within last 7 days

@The_RiotACT @The_RiotACT
Have you ever thought about getting involved in the fast-growing sport of trail running? The Stromlo Running Festival may be your perfect entry point https://t.co/CIff9vxQuN (7 hours ago)

@The_RiotACT @The_RiotACT
Fancy making the most of the beautiful autumn days here in the capital? There's plenty happening - so get out and about! https://t.co/GuOk85t9aP (8 hours ago)