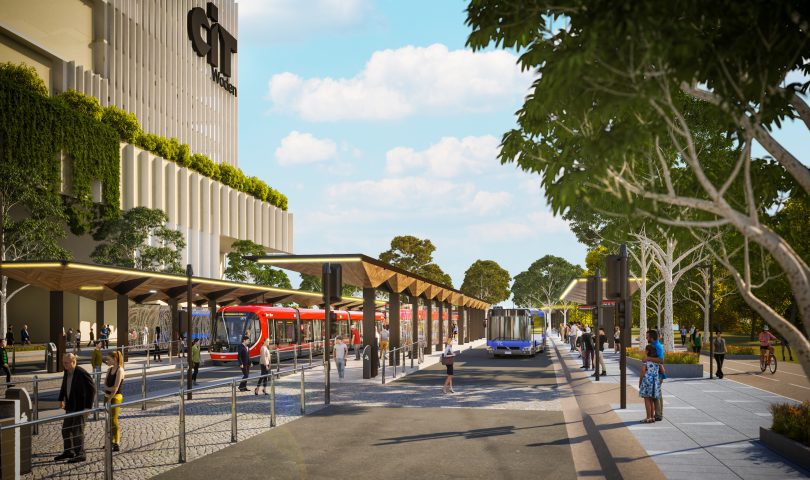 An artist’s impression of how the new Interchange and Woden CIT will look, complete with light rail vehicles. Image: ACT Government.

The ACT Government has promised a greener, safer and passenger-friendly Woden Interchange, with plans lodged for the $35 million project.

The development application details an 18-stop interchange with a central light rail platform on Callum Street, and 35 bus layovers nearby in Easty Street and Launceston Street near Phillip Oval.

Transport and City Services Minister Chris Steel said works will start in the coming months on the bus layovers followed by demolition of the existing interchange and construction of the Callum Street facility in early 2022.

“After 50 years, the Woden Interchange has had its day,” Mr Steel said.

The project is a precursor to the new CIT complex with which it will be integrated. Mr Steel said the new interchange would be better connected than its predecessor to the Town Centre’s commercial heart and new community facilities.

He said the final design had responded to community calls during consultation for ample protection and shelter from the weather, including green spaces and a safer, better signed and accessible interchange.

Calling the area a concrete jungle, Mr Steel said the project was an opportunity to plant more trees to provide additional canopy cover and landscaping to create a campus feel for the CIT.

The government was also considering a new north-south connection between Bradley Street and Bowe Street to enhance traffic flow. 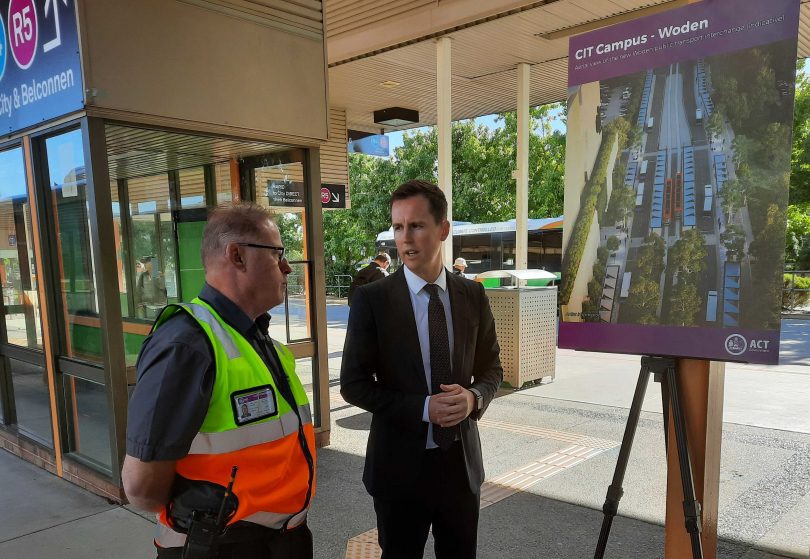 Woden Interchange Operations manager Michael Scott, who has been a contributor to the design work, said the new facility would be greener, more open and inviting, and customer friendly.

He said CCTV, better lighting and more visible Transport Canberra staff would mean a safer interchange than the current facility, which has developed a reputation over the years as a place to avoid, especially after dark.

The current unattractive and discouraging facilities would be replaced by an interchange that would afford greater interaction between passengers and Transport Canberra officers, who would be monitoring the platforms so they could deal with anything that might arise.

“The project will deliver more than 520 jobs with local Canberra construction companies, and we’re asking those businesses to register their interest in delivering the transport components.”

Mr Steel said work was proceeding on the CIT project, and he had challenged the architects to come up with a design for a state-of-the-art modern campus.

He would not say when a DA could be expected, but construction is still timed for the latter part of 2022 when the interchange is complete and the site clear for work.

During the consultation period for the interchange, more than 650 conversations with the public were recorded, including 21 in-depth stakeholder briefings, 11 community information pop-ups, 1236 visits to the CIT virtual consultation room and 183 survey responses.

Mr Steel said he expected a smooth transition to the new facility.

The public can comment on this DA until 22 March.

Firstly I would be challenging directing all southbound traffic to Woden interchange. We are spread out. Surely those outside of Woden Valley ought not to have to bus or rail it THROUGH THE VALLEY in the first place. That means taking alternative routes, cutting out unnecessary stops. The current interchange works now. Let’s put some more thought into why we want to spend more money on fancy infrastructure. Our brilliant public transport system needs a complete rethink. Katy’s $600m stage 1 light rail (actually nearing $2billion in reality) -continuing across the bridge is nonsensical and grossly inefficient. There are better, more pressing needs than this glory project. Besides, there are over 90000 folk in Tugg Valley of whom a significant number want to bypass Woden. No real planning for the future at all. Look at Molonglo-no major shopping complex, Weston Creek bearing the brunt. Ginninderry-no major shopping centre, and living on a goat track to get to work outside the catchment. The list goes on. Only likely a third of our 450000 population need to work travel. Just some perspectives from a community member.

I actually like what they are proposing here and I think integrating the CIT into the new development space is a sensible move for what currently is an area that is woefully under utilised.

I cannot believe the negativity on this site. So many critics, and not a constructive suggestion between them.
What is there obviously has to go. I don’t have a better option so I’m ok with it.

So true. It’s far easier to whinge about anything and everything.

Though think the core issue is many here just don’t like change. Many are stuck in the 1970’s/1980’s view of canberra.

Another Barr Government “we’ll just stick it here” project. They’re closing off Callum street and effectively putting up a massive barrier in the centre of Woden that will prevent many people accessing their workplaces, school and creating a dangerous situation for the police responding from the police station. The consider the chaos of cutting off a major road and feeding more traffic from Athllon Drive to already congested surrounding roads and removing the ability for traffic exiting Westfield car parks to leave in multiple directions. They need to go back to the drawing board on this one.

So basically there putting in a few trees and a couple of bus shelters. Lot of thought has gone into that design

This ACT labour/greens government are planning to have all petrol and diesel powered cars off the road by 2045. Your options will be electric powered cars and bikes, active travel(walk or ride) or utilise ACT’s rubbish public transport system to meet their zero emissions target.

Let’s be honest this isn’t going to happen but we will sure as hell pay to continue to live in Andrew’s fantasy land. The ACT climate change strategy even states as a priority of this government to create a compact and efficient city which translates to more dense housing around the tram line. I would love to see our public transport system accommodate 600 000 trips per day, a lot of people are going to be late……..

This monstrosity will entail major and protracted disruptions to traffic, which won’t help what already looks like a struggling shopping mall – probably all OK according to the grand plan to replace large chunks of the mall with more apartment towers. That will be the real “concrete jungle”, and plantings of ill-chosen token trees won’t change that.

Looks brilliant, exactly what Woden needs for urban renewal. But I do see a point that was brought up about shelter, especially from the wind chill in winter or adequate shade in the summer. Still looking forward to seeing it one day

Fiona Carrick what is your say in this? 🤔

What a disappointing design. Say what you will about the current bus station but at least you are protected from the elements transitioning between services . Sadly Major projects has not listened to the community feedback and all that will be is a few bus shelters . No architectural designed canopy/ roof covering Callam Street. No enclosed waiting bays either.

Yeah, a couple of plants and a fat bloke a few months off retirement in a flouro vest should keep the junkies and drunk derros away from the bus interchange.

Why a fat bloke? There are plenty of fat women available too.