15 May 2017 | Capital Football
Start the conversation 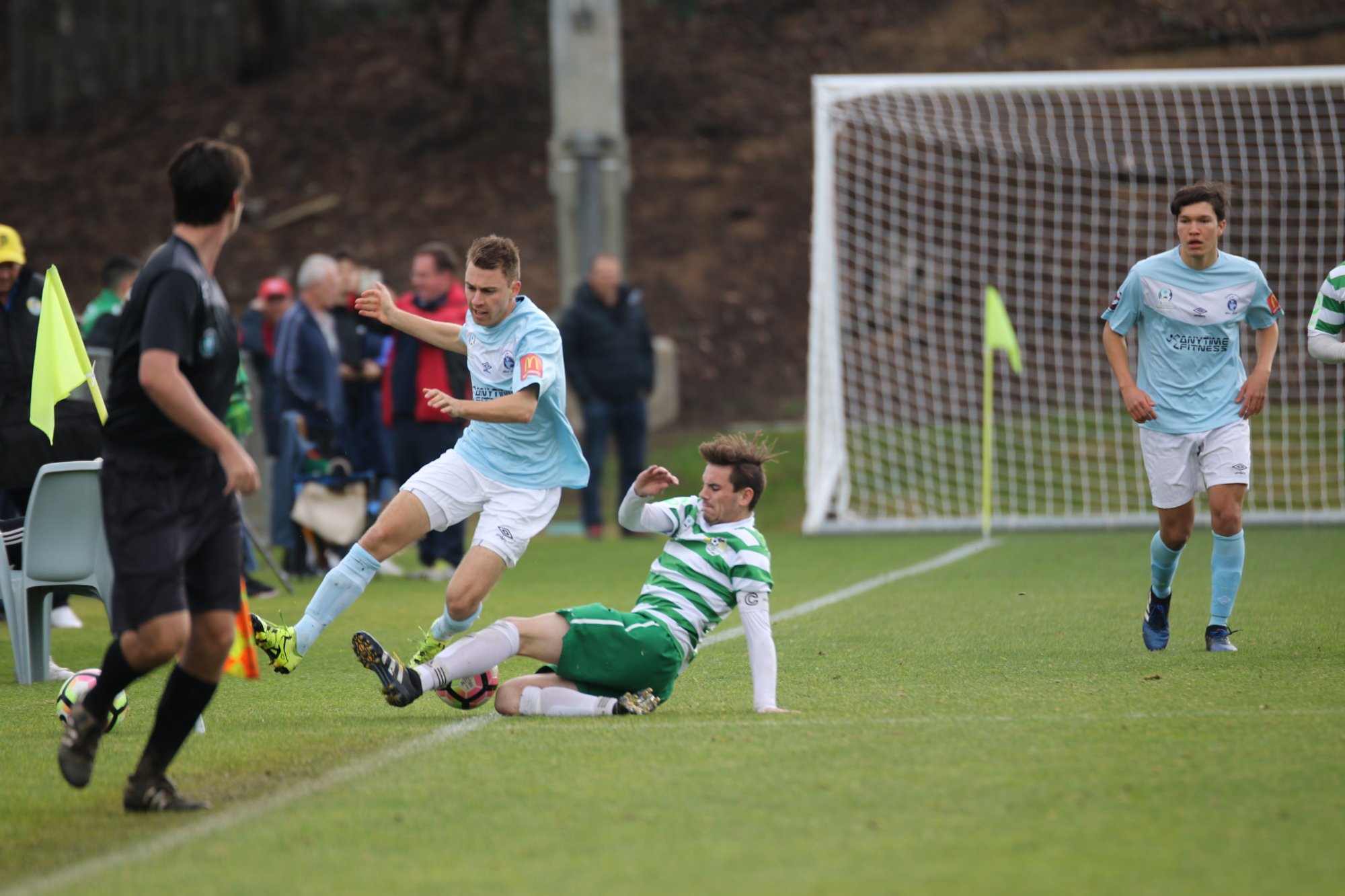 A 4-2 loss to the FFA Centre of Excellence halted Gungahlin United’s winning streak on Saturday, as two goals in either half helped the home side get back on the winners list.

Jacob Italiano fired home after 16 minutes to give the COE the lead before Melad Ahmad doubled it just eight minutes later, but Gungahlin responded strongly and Jack Green scored three minutes after Ahmad to cut the advantage to one goal. Both sides created chances as the second half continued on evenly, and Gungahlin were given the chance to restore parity as the referee whistled for a penalty in stoppage time. Misko Naumoski stepped up to covert the spot-kick for the second week in a row and put Gungahlin on an even keel at the break.

Both sides came out strong from half-time pushing the ball around, but the COE made the next breakthrough as Lleyton Brooks scored their third. The visitors struggled with numbers as injuries took their toll, and the home side were reduced to ten men as Patrick Scibilio was dismissed for a rash challenge. The Centre of Excellence sealed the deal in the 92nd minute as Bryce Bafford tucked away a penalty to make it 4-2.

The visitors started the stronger but were held at bay well by a determined Monaro defence as the home side looked for their first points of the campaign. But they could only hold out for so long as Marko Vrkic powered home a header to give his side the lead after 38 minutes.

Ryan Moxon continued on his impressive FFA Cup performance in the Monaro goals, pulling off two big saves just before the break to keep his side only one goal down. The Panthers had a chance to hit back almost immediately after half-time as they had a penalty, but Sam Brown saved well in goals to keep the advantage.

And the ladder leaders made it count just three minutes later as Jordan Lamb scored to double the lead and put Canberra FC comfortably in control. Moxon pulled off another great save to deny Thomas James 1-on-1 but the visitors rode out the half to finish 2-0 winners.

After their first win of the season last weekend, the Riverina Rhinos were brought back down to earth thanks to a seven-goal thumping from Tigers FC.

Braces to Nahuel Guerrero, Nikolas Abot, Daniel Barac and a single from Goran Josifovski helped Tigers snap a three match losing streak that had seen them slide down the table.

Guerrero got his side off to the perfect start as he fired home after just two minutes, and Abot chipped the advancing goalkeeper to double the advantage four minutes later.

Guerrero got in on the act again ten minutes later when he had his second from a corner, and Barac smashed home a rebound 10 minutes further on after the keeper could not hang onto the ball. Captain Josifovski added a fifth just minutes from the half-time break as he went on a delightful solo run into the box before finishing tidily.

Rhinos seemed to come out of the half as a different side however, and immediately looked to quell the Tigers abundant attacking threat from the first half. However, the visitors could only hold out for so long, and 30 minutes in Abot completed his brace as his long-range effort took a wicked deflection into the back of the net. And with eight minutes remaining Barac iced the game with his second to round off a big afternoon for the home side.

Canberra Olympic kept things rolling with their fourth straight win in an 8-2 belting of Woden-Weston on Saturday.

Olympic started fast and went ahead early as they quickly took control of the half. The reigning Premiers jumped out quickly to a 3-0 lead as they controlled the midfield, with Tom McLachlan grabbing a quick brace and Stephen Domenici grabbing his first while Robbie Cattanach ruled the middle of the park.

Daniel Crkovski responded for Woden-Weston before the half to give the home side a semblance of hope heading into the break down 3-1.

Domenici grabbed his second shortly after half-time as he converted from the penalty spot, and the game evened out before Olaide Yinka-Kehinde pulled another back for Woden-Weston at 4-2. Jeremy Habtemariam pushed the lead back out to three goals just minutes later however, as Olympic went all out as the game wore on.

With the home side on the back foot Domenici pounced for his third with just 12 minutes remaining, before Josh Gulevski got in on the act with a couple of minutes left. Domenici found time to score once more as he tidily finished off his 13th goal of the season before the referee blew time on a massive win for the visitors.

Belconnen United bounced back from their midweek FFA Cup loss to Monaro as they recorded a convincing 4-1 win over Tuggeranong United. A three goal first half set up the visitors perfectly as Jason Ugrinic’s brace and goals to Phil Borgeaud and Sam Whithear cancelled out Amilio Kishta’s single goal.