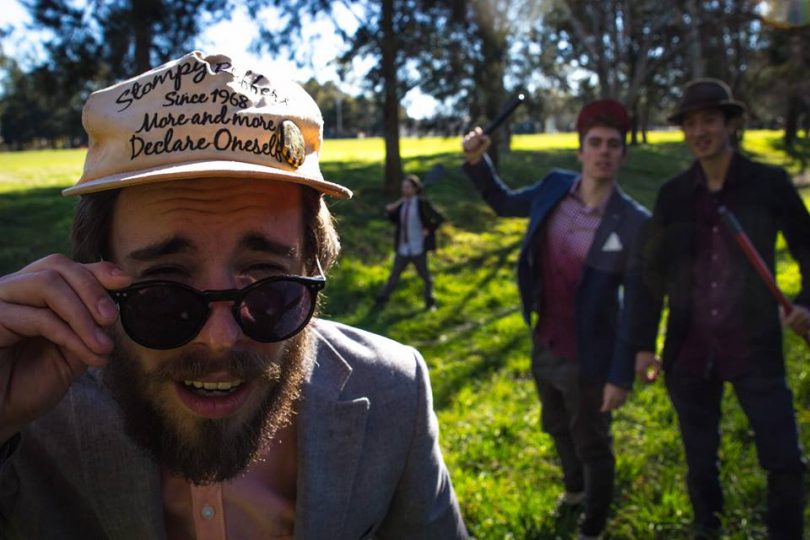 Produced by singer and guitarist Morgan Quinn in his home studio, the track is part of a sprawling concept album that tells the story of some friends in the fictional small Australian town of Fevernall, attempting to conquer the famous local mountain Whitman’s Peak.

The video was directed by Jive’s guitarist Declan Shrubb – the filmmaker behind Canberra’s zombie-comedy feature film Me and My Mates vs the Zombie Apocalypse starring Jim Jefferies and Alex Williamson. Shrubb, along with Pleased to Jive You, also created the digital sketch series Make Canberra Great Again.

The video was filmed in two takes, with a home-made bike mounted camera rig built by local grip John Waterhouse, who also designed the SnorriCam rig for the end sequence. It was produced by Hew Sandison and features cameos from local bands such as The Wumpaz, Northbourne Flats, Lady Denman, An Inconvenient Groove and Chasing Nimbus.

Pleased to Jive You will be launching “Backward Steps” as a single at a free gig at the Phoenix Pub on Monday 5 November, supported by The Wumpaz, Subway to Venus and SemenandGarfuckel. The song is available now on Spotify, Bandcamp, Apple Music and Triple J Unearthed.