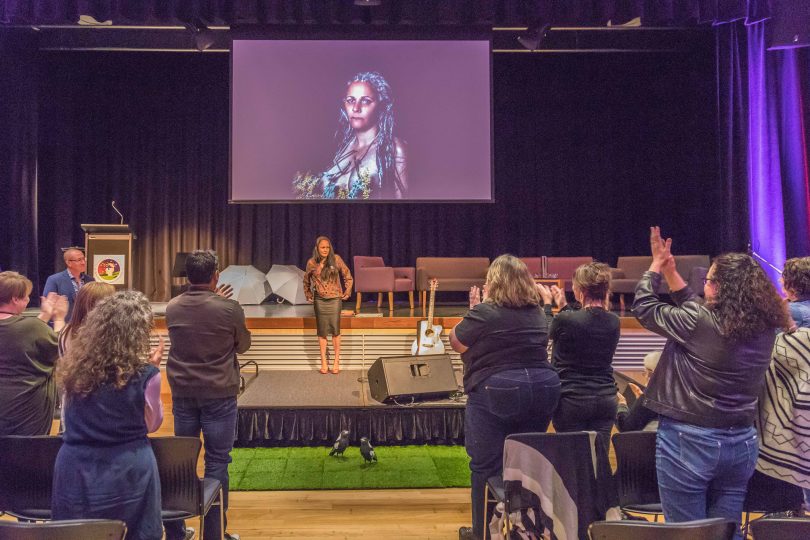 Sassi Nuyum, aka Meaghan Holt, received a standing ovation, and many a tear was shed during her talk. Photos: David Rogers Photography for About Regional.

Region Media’s Festival of Open Minds was proud to showcase Sassi Nuyum, a performer, person and soul travelling life’s road with a compelling insight and honest creativity that rises above the barriers that sometimes block cultural understanding and open conversation.

Sassi Nuyum, aka Meaghan Holt, has been writing since she was a little girl. You could say, writing runs in her blood. 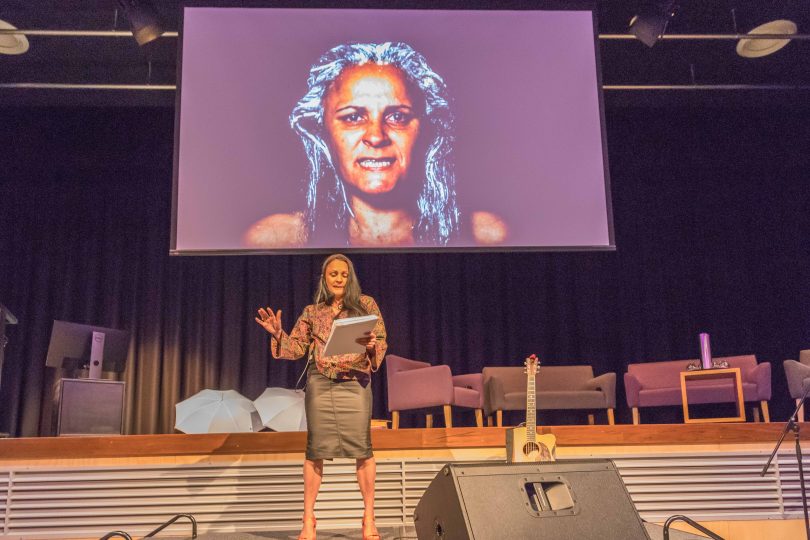 The embodiment of a ‘sassy spirit’, her writing packs a punch.

Meaghan lost her mother at the age of nine. She was then raised predominately with her Aboriginal family, extended and otherwise. That said her mother’s spirit is strong and burns bright; it guides Meaghan’s writing along with her very large bloodline of ancestors.

Her writing and subsequent performance can pack a punch, hence her creative name ‘Sassi Nuyum’ – Nuyum meaning spirit in the Wakka Wakka language. A spirit that is always edged with a lively, bold stage presence that supports the idea of a ‘sassy spirit’. 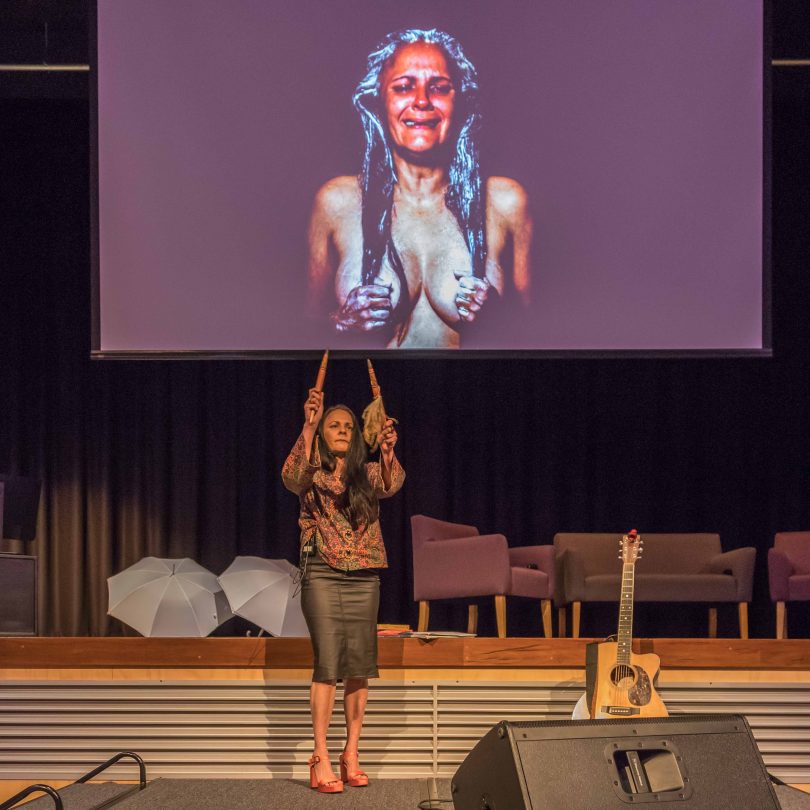 Sassi now lives on Yuin Country in the Bega Valley but was born on the lands of the Kurnai People in Yarram, Victoria.

Her mother’s family are of European background – dairy farmers who were very connected to the countryside they made a living on. Her grandmother (Pickering) is from Wakka Wakka Country, her grandfather (Holt) was born on Bidjara land at Springsure, west of Gladstone in Queensland and her father is a Gayndah man, also a Queenslander. 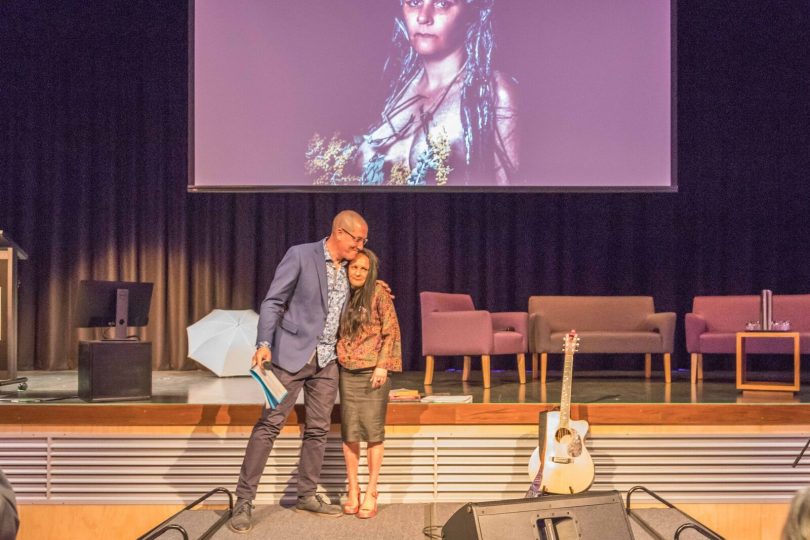 Ian Campbell from About Regional with Sassi Nuyum at the Festival of Open Minds.

Meaghan’s ancestors also had periods of being removed to Worrabinda and Cherbourg missions. It’s heritage Sassi has a deep connection and respect for, values that impress and leave a mark on audiences.

Sassi writes on subjects ranging from mental health, colonisation, domestic violence, substance misuse, environment, and grief, with each performance guided by the moment and the spirits at her side. 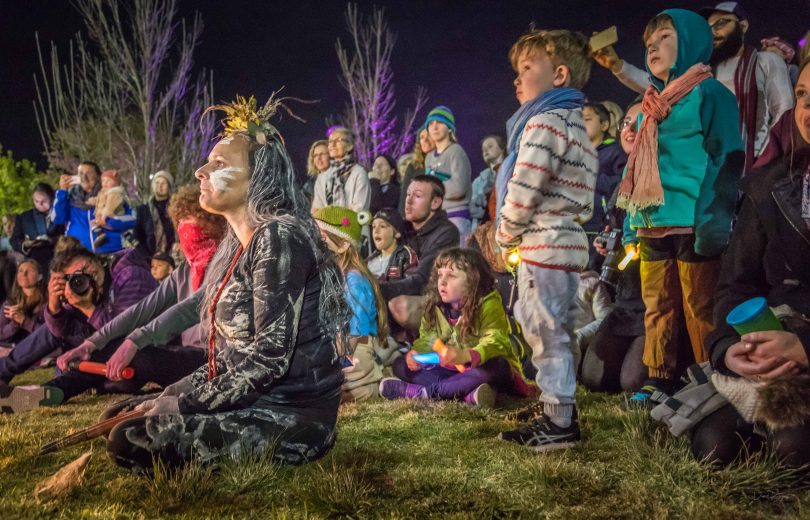 Sassi Nuyum, at the opening ceremony of the Festival of Open Minds – Parklight Bega, 13 September 2019.Last year’s Giiyong Festival at Jigamy between Pambula and Eden was the first time this thirty-something artist performed publically. It lit a spark in her and the rest of the community, both wanting more and a deeper understanding.

Meaghan Holt, both as herself and as Sassi Nuyum, channels the hurt, pain and resilience of her own background and that of her peoples in a way that open minds, hearts and shared understanding.

Her performance at Open Minds 2019 in September prompted a standing ovation and tears from the audience.

Click play to be a part of the experience…

dulynoted - 32 minutes ago
those statistics might be outdated; renewables are getting cheaper and more energy efficient every year as technology improve... View
Capital Retro - 2 hours ago
In which way isn't nuclear power profitable? It depends on which experts you are talking too: https://www.ceda.com.au/NewsAnd... View
nobody - 3 hours ago
According to the IEA there are over 450 nuclear power reactors in over 30 countries (2018). Many of these countries don’t w... View
Food & Wine 1

Compassion on display at this year’s Four Winds Festival