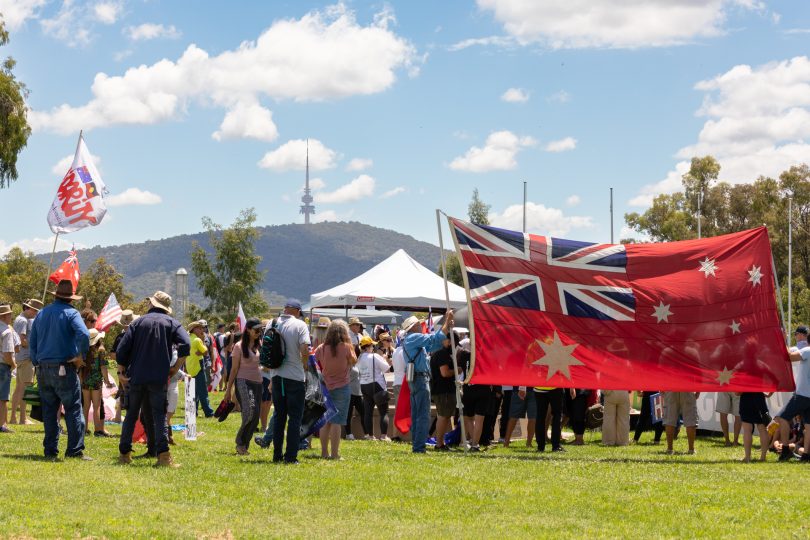 Police have been asked to clear a camp of protestors on the Patrick White Lawns near the National Library of Australia.

The ‘Convoy to Canberra’ arrived on Monday morning (31 January) as part of a national protest against vaccination and mask mandates. The hundreds-strong group marched on Parliament House on Monday and surrounded the National Press Club on Tuesday after hearing that Prime Minister Scott Morrison was speaking.

The National Capital Authority (NCA) said in a statement it had asked the Australian Federal Police and ACT Policing to “take necessary action to enforce the laws and remove tents, camping infrastructure and vehicles from the site”.

Unauthorised camping is not permitted in the parliamentary precinct or NCA-managed lands.

The NCA has granted permits to several event organisers who are beginning to set up today. No other permits have been issued in relation to the East and West Lawns, Questacon car park or Patrick White Lawns.

Australia is supposed to be a democratic country and Canberra should welcome all peaceful protesters, as that is the whole reason Canberra exists. Canberra was established to be the central ‘meeting place’ for all Australians to come and have their say about the government. All Australians are welcome to come here.

And New Parliament House was explicitly designed so that the public could always walk above the politicians, but that didn’t stop the politicians from putting up fences to stop that. We’ve been descending into a police state for a while.

There’s a difference between peaceful protests and camping on public space over many days.

Although they should also apply this equally to all Australians.

This rabble is being treated no differently to any other protest group. No one is restricting their right to protest.

What they were doing was breaking the law by having an illegal campsite. Further laws were broken by some that refused directions to move on. This is without mentioning the illegal firearms and other crimes being committed.

Re the Epic suggestion, haven’t the good folks of the inner north suffered enough from noise and pollution following Summernats?

pdpd, where do you think the Convoy to Canberra protesters should camp?

Summernats is a Mensa meeting, compared to this rabble

It remains to be seen whether these entitled sovereign citizens will move on, or be moved on.

Packing up conspiracy theories, tinfoil hats and made in China merchandise is going to be a blow to these fair dinkum, dye in the wool freedom fighters.

There is a great camp site with full amenities just 8 minutes north of the city, all protesters are welcome.
https://www.exhibitionparkincanberra.com.au/camping/

NCA exists purely as a very expensive and complicated form of rubber stamp. It follows logically that the Morrison Government wants them gone. 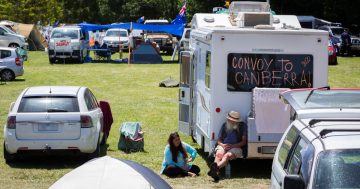