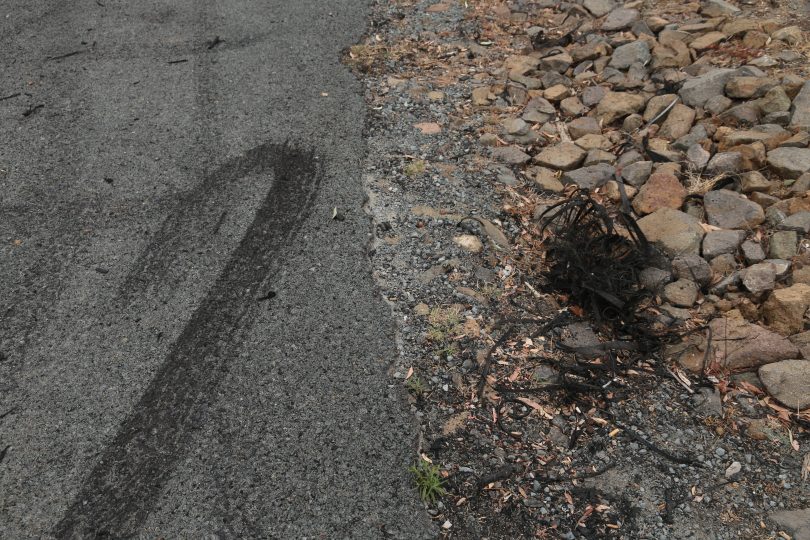 Burnouts near the Mount Mac entrance can see meet-ups of over 50 cars every Friday night. Photos: Dominic Giannini.

Locals and police officers have called burnouts in the Tidbinbilla Nature Reserve and Lower Cotter Catchment absolutely disgraceful during a period of such high fire risk.

At the Uriarra community meeting on Sunday (12 January), residents voiced concerns over weekly meet-ups that can see in excess of 50 cars, including trailers with extra sets of tyres, doing burnouts every Friday night near the Mount Mac entrance.

Drift marks around the tight corners on the way up to Uriarra are also a common sight. 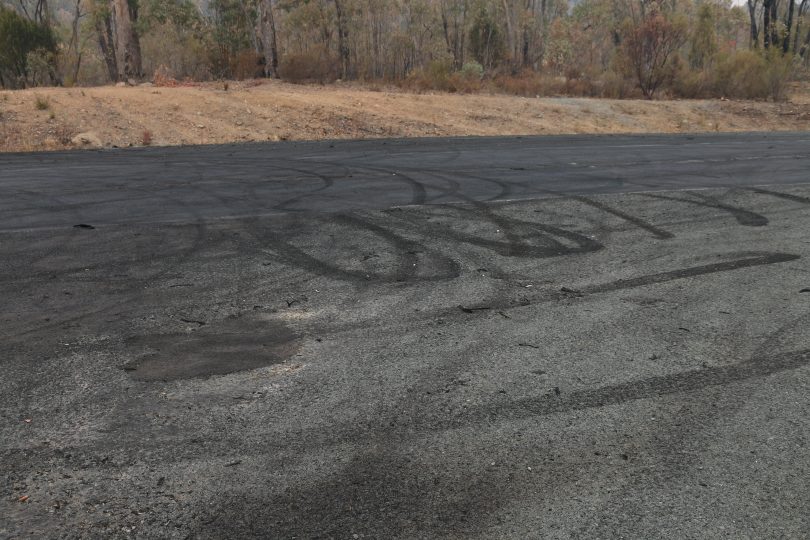 Bushfire smoke is replaced by burning rubber on Friday nights as locals are concerned that burnout meets can start a fire with the park being so dry.

After losing the small forestry settlement in the 2003 fires, residents are worried about how fast a fire could spread in the surrounding bushlands if sparks or smoulder from burnouts started a blaze.

Acting Police Officer in charge of Tuggeranong Police Station Chris Ball said this behaviour will not be tolerated.

“I saw the burnout marks as we were driving up here today, and my personal view is that is disgraceful,” he told the residents at the community meeting.

“It should not be happening, especially at this time of year, it is so dry, with fires around the country.

“It is something we are aware of, and something that we are working very, very hard on.” 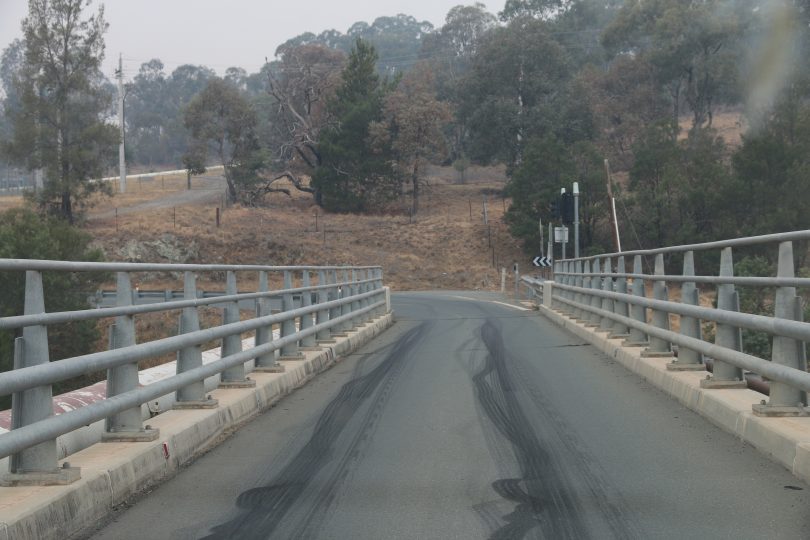 Burnout skid marks across a single lane bridge near Uriarra.

“Obviously the Pearsons Creek fire was started by a car there,” he said at the community meeting.

“So we have had this area officially closed for a number of weeks now. Before Christmas, we took the decision to close the park and the surrounding areas west of the Murrumbidgee.

“The message is out there to keep people out of the landscape in case there is a fire.

“It is very much high on the radar. I called in a car last night and within an hour police had dealt with it.” 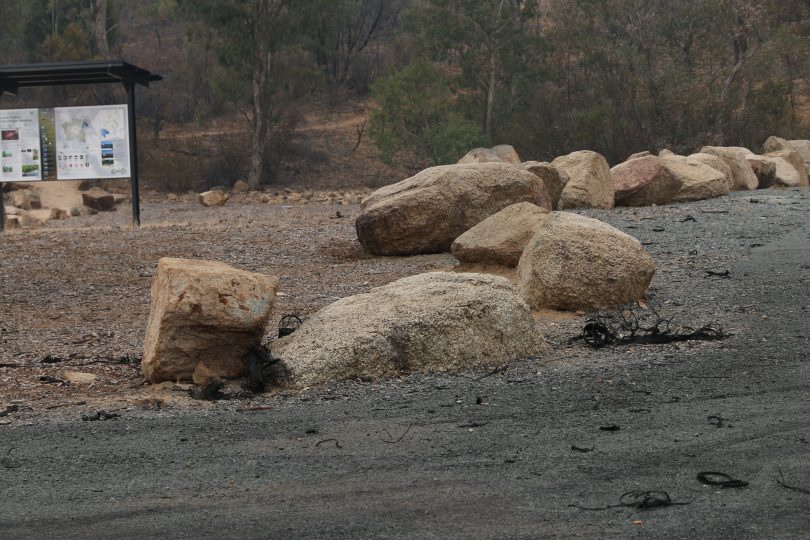 Rubber and tyre scraps litter the Mount Mac entrance, with clumps of rubber spread across the road.

“We can do things like seize the cars and hold the drivers accountable,” he said.

“Cameras are in the discussion and we have a number of different approaches being used, but obviously I will not go into all those.”

Anyone that witnesses a suspicious incident is urged not to take matters into their own hands but to contact police immediately. 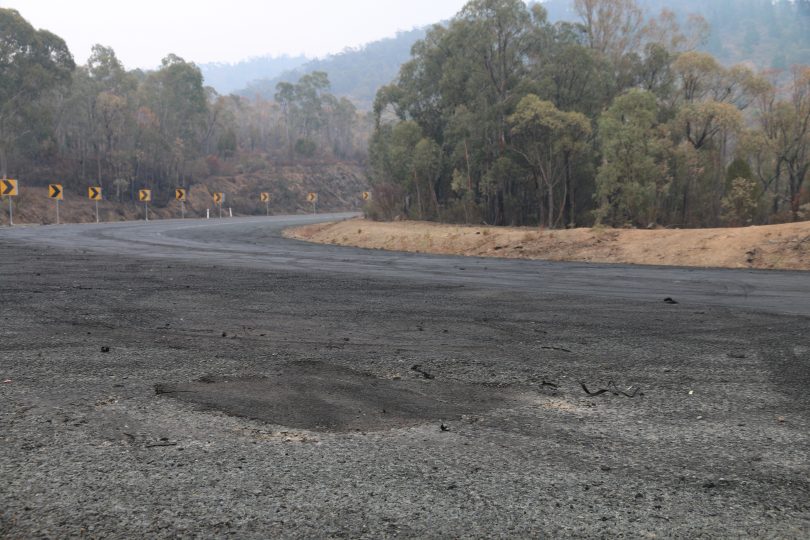 This has been going on for some time and I agree that consideration be given to providing a location(s) away from public roads for the burnout enthusiasts. I hope it doesn’t take serious injuries or deaths to change things.

The police have more important thing to do than worry about a couple of hoon out wearing out there tyres. What are they hurting. Give them somewhere to go to do it legally or leave them alone.

Surely if what happened at eaglehawk was Summernats related then this must be too. Better ban Summernats!

If it's such a regular thing wouldn't take much to have some police hiding or secret cameras installed. No brainer.

They have been doing it for years. The tyre marks attest to that.

Maybe it's time to take all the cars of everyone. Ducking nanny state.

ACT Government - perhaps give people a safe place to do burnouts...

There will always be this kind of behaviour so if Police step in, the bogans will just find another place to go.

Fiona why are they bogans? That’s like you being called a bit upity yeah?

Time for a legal place that these dudes can waste their money at an appropriate venue .

Disgraceful is not enough, ban it.

For all the “lock gates & entry” comments, it’s happening at the intersection into the park. The gates and entrance are 100m down Tiddy Road

International tourists must be REALLLLL impressed

What hope do we have if police cannot work out a plan to deal with an activity in a location that is accessed by a road to the North and a road to the South. How hard can it be. Obviously they are not really as concerned as they are saying.

So many times we have reported burnouts and the police did nothing. We are now deaf and sometimes I say to myself "hope they hit a tree"! Monthly there's a caravan of speeding cars at around 11pm to gather and do their thing🤬And the police are aware!🥺

There's also a camera at the turnoff from down in Tuggeranong with a police logo next to it, surely they are able to capture number plates?

Well, the gov won't provide legal options for motor sport or drag racing? And they expect these enthusiasts (weather you agree or not) to do something else. Wake up. The community is a mash of all people.

Mick Vanderplaat How about petitioning your state or territory government instead of putting the rest of the community in danger then? Or is that too much responsibility for motorsports enthusiasts....

kristen..... you are obviously not aware that the politicians in power right now ie Mick Gentleman went to the election on the promise of a drag strip. He lobbied for our vote on this promise... we voted for him.... we got lied too.

Ian McGregor thats correct Ian we where promised way back in 2004 and 2008 by the same person Mick Gentleman about a dragway, 8 million was allocated for the dragway wonder where those funds are🤔

They call it rush hour . Disgraceful

No it's not Rush hour cause that shut down ages ago

Jose Black - 2 hours ago
The ACT Greens have a major policy on supporting the community sector (including youth and mental health services) and giving... View
Ghanaian Aussies - 8 hours ago
Tom Munro Bullying someone who identifies differently to them is what I am talking about. This is not a fair go for all. So i... View
catder - 12 hours ago
Bethany Williams your post exposes you as a hypocrite that knows nothing. We know there are members of the Libs who are conse... View
Food & Wine 30

Bianca Rossetti - 10 hours ago
Sadly it to access the chronic pain clinic it is over a year wait!! View
News 6

theroundone - 16 hours ago
“This is absolutely not gang-related. I’ve not seen any information or evidence to say that this is gang-related,” Det... View
Business 4

Car seized after doing burnouts around Gilmore and Chisholm