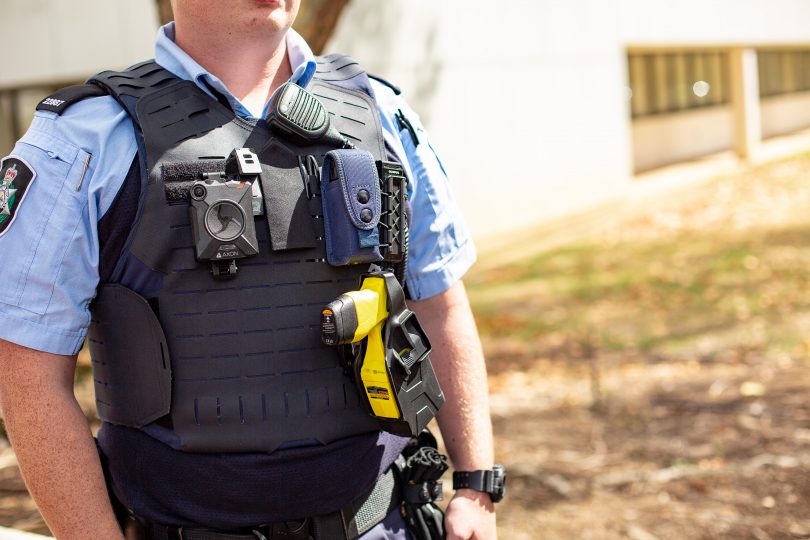 More than 480 kits will be rolled out across ACT Policing over the next year. Photo: George Tsotsos.

ACT Policing has expanded the use of body-worn cameras, now allowing officers to activate the camera in public places.

From 28 August, the second phase of the technology rollout will enable officers to manually activate their body cameras in a public place and inside private premises, but only after the occupant gives their express permission.

Under phase one, which commenced on 19 March 2019, all body-worn cameras in close proximity are automatically activated as a soon as a firearm or taser was drawn from its holster, recording multiple views of the incident.

ACT Policing members who have already been issued with a body-worn camera will have to complete an additional training course before they are permitted to use the cameras in the wider range of circumstances.

Over the next 12 months, more than 480 body-worn camera kits will be rolled out to bolster the ACT Policing’s current 369 kits.

An ACT Policing spokesperson said some of the benefits of body-worn cameras include providing an accurate record of events that are difficult to dispute, improving the quality of evidence presented in court, cutting time spent writing written statements and providing police with greater protection against excessive use of force claims.

Why can’t they just have them on full time?

They’re there for protection and evidence.

All commercial pilots have their words recorded on cockpit voice recorders.

And they can turn it off when they gonna get rough.

Yeah and turn them off when it suits them……….

Ah Canberra! Where people who have never done a days Police work, can give advise on how to do it.

Matt Donnelly – Liberal Democrats ACT YesI wonder how it will be admissible in court until your lot makes it a crime to do so.

Matt Donnelly – Liberal Democrats ACT Smaller government, how do you equate it with a growing population? And what about personal freedom, seems to me like freedoms in Australia are being eroded.

Surely the whole point of these is an always-on, rolling buffer? Basically a CCTV camera mounted to a human?

They should be turned on the minute they call in with sitrep. No exceptions.

I support the use of them, police put themselves in danger every day, for their own safety, let alone the public. If they are doing their job by the law I find no issue with the use of them. We ask so much of the police and safety services, Ambos, 🏥 staff, etc, they should be given the respect they have worked so hard to give unconditionally. Thanks for the great protection. 🙌🌟⭐🌟🙏.

Meaning they can turn them off at will? Remember Justine. 😢

There’s laws about how much an employer can film and where they can film their employees. Plus the civil libertarians don’t want to be filmed by police and further privacy issues with filming on private property. This all means that the cameras can’t be on full time and there is no other way to manage it other than to have the officer be able to turn it on and off.

Can we record said recording?

Can a citizen ask them to record an interaction?

they should always be on.

Presumably police should be able to turn them off. I imagine most of us would not be willing to have a body camera on while going to the toilet.

They should be on anytime they interact with the public to protect both the police and the public.

Why do they need permission? Excuse me civilians who are trying to assault me or falsely accuse me of something, do you mind if I turn on my camera? No? Ok then, carry on.