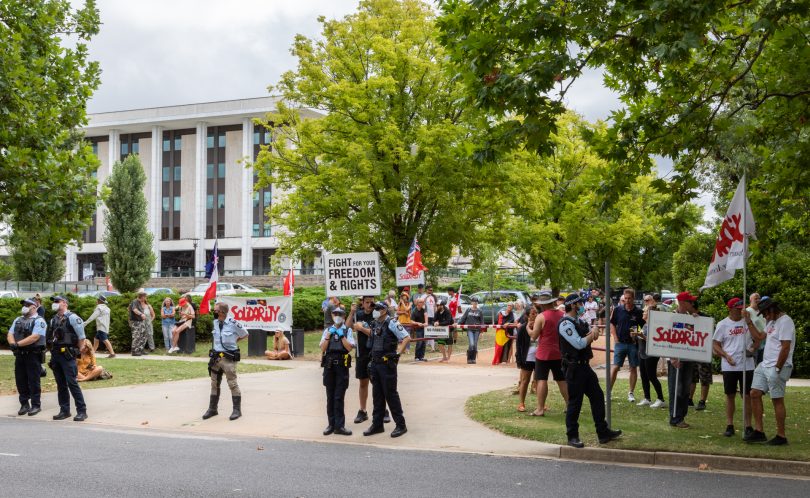 The ‘Convoy to Canberra’ is currently camped on the Patrick White Lawns. Photo: Michelle Kroll.

Days are numbered for the massive rally of protestors currently squatting on the shores of Lake Burley Griffin as police prepare to move them on.

The ‘Convoy to Canberra’ arrived on Monday morning (31 January) as part of a national protest against COVID-19 restrictions. Protestors are currently camping on the Patrick White Lawns near the National Library of Australia.

In a statement released on Wednesday (2 February), the National Capital Authority (NCA) said they have asked police to clear the unapproved camp.

“The NCA has requested the Australian Federal Police (AFP) and ACT Policing to take necessary action to enforce the laws and remove tents, camping infrastructure and vehicles from the site,” the statement read. 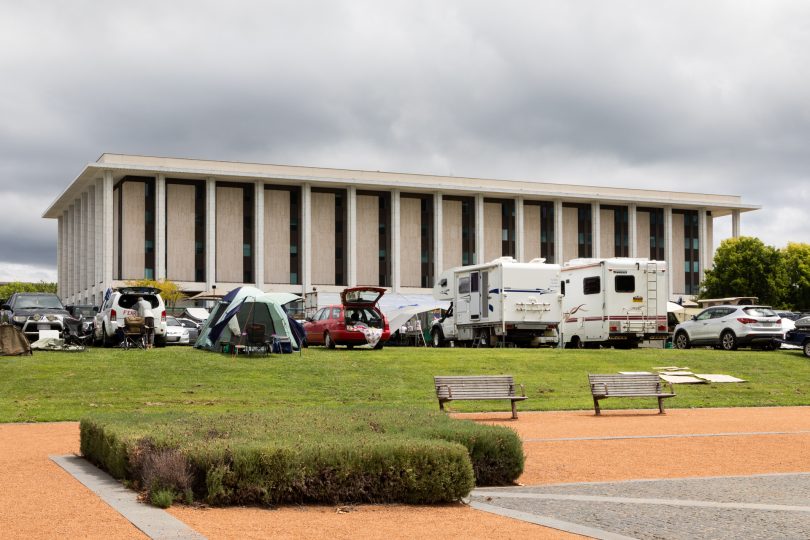 A spokesperson for ACT Policing said they would begin engaging with protestors and campers on the lawns this afternoon.

“ACT Policing will ensure people at this location are aware they are parked and camping illegally and may be subject to fines and other penalties.”

Move-on orders may then be issued in the coming days.

“The rights of people to peacefully protest is always acknowledged by ACT Policing. However, when illegal actions take place, the people responsible will be dealt with in accordance with the law,” the spokesperson said. 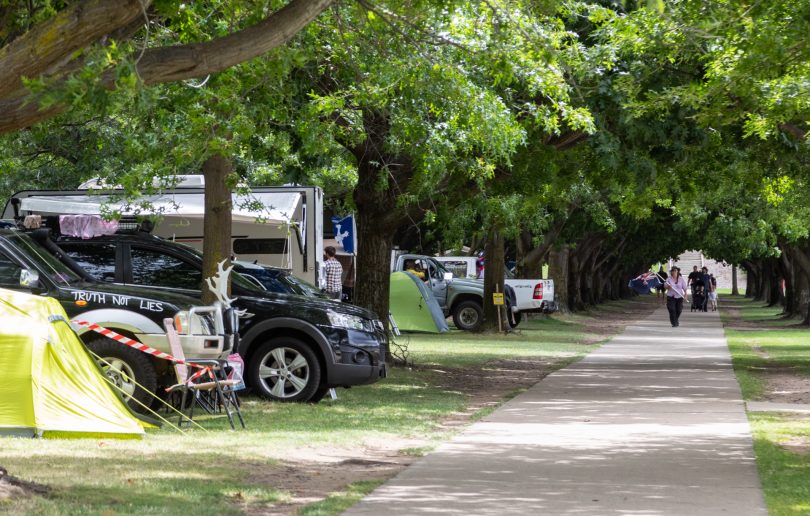 Unauthorised camping is not permitted in the parliamentary precinct or NCA-managed lands. There are several pieces of legislation under which camping, erection of structures, occupation, or the depositing of things on National Land is an offence.

The NCA is also preparing for a big event season in the National Triangle from now until April 2022, beginning with the Night Noodle Markets from 25 February. Set up commenced today.

ACT Policing first warned of disruption on Monday morning, noting traffic delays on the Federal, Barton and Monaro highways, and Northbourne and Commonwealth avenues as cars and trucks started rolling in from NSW, Queensland and Victoria.

The hundreds-strong group marched on Parliament House later that day before surrounding the National Press Club on Tuesday after hearing that Prime Minister Scott Morrison was speaking. A group marched over Commonwealth Avenue bridge this afternoon (2 February), waving various flags and handwritten signage.

Businesses near the National Press Club in Barton say they faced abuse as protestors clamoured around their venues. One café had obscenities etched into their outdoor tables.

An employee from the café says the vandalism has been mostly repaired, but described Tuesday as a “very interesting day”.

“Staff copped abuse for wearing masks, or ‘muzzles’, and were accused of trying to steal private medical information,” the employee told Region Media.

“I just want them to stick to wherever they are and stop coming to our restaurants.” 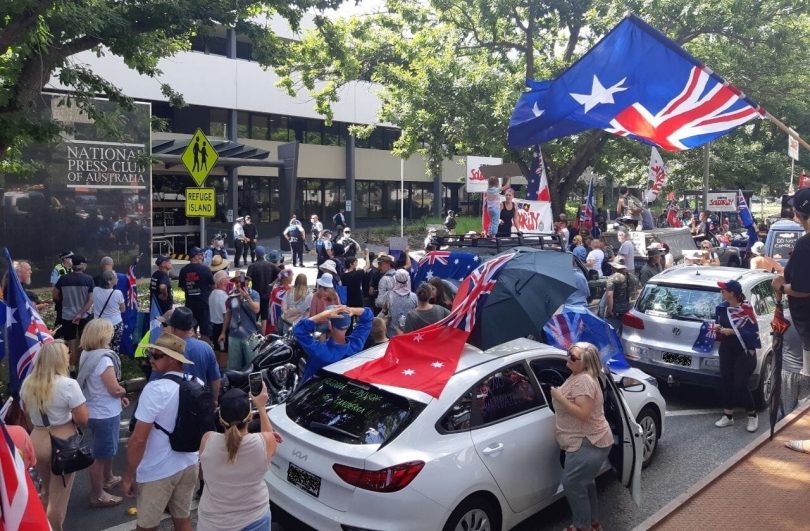 Posts on the group’s official Facebook page have called out this behaviour, saying that abuse and violence undermines what they are trying to achieve.

“This is for the people who want their lives back,” one statement reads.

A GoFundMe page associated with the group was frozen yesterday until organisers can provide GoFundMe with a detailed spending plan. The anonymous organiser, ‘Ironbark Thunderbolt’, has since disabled new donations at $180,889.

More cars and trucks are expected to arrive over the coming days as plans surface for a mass rally in front of Old Parliament House at 11 am this Saturday.

It’s understood the protestors plan to stay until the first sitting of Parliament next Tuesday (8 February). 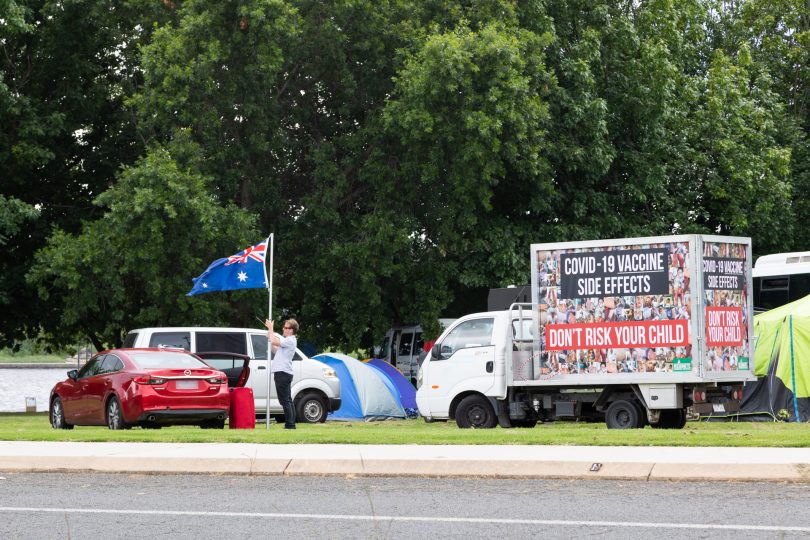 It’s understood the protestors are arranging a mass rally in front of Old Parliament House at 11 am this Saturday. Photo: Michelle Kroll.

A similar scene unfolded a few weeks ago when protestors from a ‘sovereign citizen’ movement that aligns an anti-vaccination campaign with Aboriginal rights were moved on from their campsite near the National Rose Gardens. That action was taken under the 1932 Trespass on Commonwealth Lands Ordinance, enabling police to remove trespassers on national land, including the Parliamentary Triangle.

Members of this protest group are alleged to have lit a fire that caused significant damage to Old Parliament House on 30 December 2021.

The NCA acknowledges that Canberra has many places where people can “exercise their right to communicate their opinions and ideas through peaceful protests and demonstrations”, but the East and West lawns, Questacon car park, and Patrick White Lawns are not those places.

One notable exception to this is the Aboriginal Tent Embassy, which holds a permit to camp on the lawns of Old Parliament House.

A spokesperson for the ACT Government said they had no intention of altering their pandemic management plan in response to the protestor’s concerns and are leaving the matter in the hands of ACT Policing.

If they want to do whatever they want and be Karen’s and Kevin’s and don’t want act civilised, give them Byron Bay as their own state name it, AVT. Anti Vax Territory. Bye Felicia

Do they understand how foolish they appear? I guess not. The MAGA hats are a nice touch.

Not before time! Don’t understand why it’s taken this long!!!

If you’re going to go out and protest against being locked up why not just go out and go about your business instead? Kinda makes the same statement 🤷‍♀️

Stacey Rene I think we’re all equally over it and the goalposts changing all the time. What I mean to say is it’s as big of a protest if you go about your life in defiance.

Liam I had no idea this was happening until I was to bootcamp tonight and saw all the people and vans!

Good do it while it’s freezing cold down there

If they are camping somewhere unauthorised move them on now. Why wait for them to settle in?

Fair enough too. Can you imagine if we tried to camp like tust

Why are these people protesting against a mandate which doesn’t even exist? It’s like they want to be victims.

Tim Mak their not all from Canberra 😂😂😂😂😂

Gabrielle Hicks this is it

These people are hilarious.

Get them to mow the grass along the highways.
They are good for nothing else!

Brett Jarius arent you paying the ACT Govt to do that though? 🤔

Good riddance to these idiots.

Peter this is what all the cars are for

There were so many police cars there at about 4:30. Can’t wait for these idiots to go home. 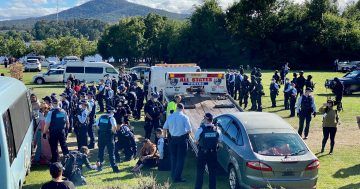