ACT Policing is seeking witnesses to an aggravated robbery which occurred in Civic today (Sunday, July 5).

Around 6am a 45-year-old male victim was approached by a man holding a knife on City Walk between Akuna Street and Binara Street, Civic.

The offender demanded money and the victim opened his wallet. The offender stole a small sum of cash and fled in the direction of the Canberra Casino.

Police immediately attended and searched the area but were unable to locate anyone matching the description.

The offender is described as Caucasian with fair hair and was wearing a black hooded top and black pants.

Police are appealing for any witnesses who may have seen suspicious persons or activity on City Walk around 6am to contact Crime Stoppers. 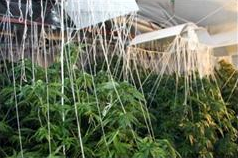 The hydroponic setup found inside the garage

Forensic Services officers identified four bedrooms and a large garage in the home which it will be alleged were equipped for growing hydroponic cannabis.

Police seized about 40 mature cannabis plants, each more than a 1.5 metres tall and ready for harvesting, as well as about 40 cannabis seedlings.

Police also seized about 30kgs of cannabis and about 2kg of cannabis “head” in vacuum sealed bags, as well as specialised cultivation equipment.

The estimated street value of the drugs haul is around $200,000.

Police will also allege that electricity supply to the home had been tampered with, and the supply diverted around the meter box. Thousands of dollars worth of electricity is suspected to have been stolen to power the hydroponic cultivation.

Police are appealing for any witnesses who may have seen suspicious persons or activity in Knaggs Street, Page, to contact Crime Stoppers.

What’s the alternative dvaey? Just give up and legalise it?

Oh noes …. DMD will be awoken to the smell of ……………….. yet another debate over “to legalise, or not to legalise. That, is the question”

This has three benefits:

1) Mary Louise Parker, the most beautiful woman in the world.

2) Explains the economics of the industry very well.

What’s the alternative dvaey? Just give up and legalise it?

You obviously have no idea how much these professional hydro set ups cost to run if you think those numbers are pulled out of the air.

The war on drugs wins again. This will make those drug users take an extra 5min to find someone else to get their stuff from.

Bet the guy will get off with a warning, the evidence will be depleted by officers before being destroyed, really the only outcome here is that for a brief period those dealers who werent caught can raise their prices.

Also, thousands of dollars of electricity? That means running a 1kW light for approx 1 year 24/7. These numbers seem pulled out of the air, or pulled out of someplace else.

They don’t bypass the electricity to save money.

Police will also allege that electricity supply to the home had been tampered with, and the supply diverted around the meter box. Thousands of dollars worth of electricity is suspected to have been stolen to power the hydroponic cultivation.

I’ve been told by an acquaintence who’s a copper in Victoria that this is a very common way for these people to get caught. The electricity companies figure out that the metre box has been bypassed and they refer it to the coppers. You’d think that there was enough of a margin in hooch to cover the cost of power – but then again, if you’re breaking so many laws already whats a little utility theft?

And considering that to get it to street value any number of middlemen have to take a cut.

Especially when the estimated value of the crop is meaningless without any information about the costs incurred in growing it. If you looked at the figures involved it may even be more profitable to have a real job.

I’ve never understood the Media fascination with what drug hauls are worth. I don’t give a shit what it’s worth and all theses reports do is to encourage every other born loser to try dealing or growing drugs for themselves once they see the chance of mega money.

Sarah Fox - 2 hours ago
Zalan Filip we will have to check it out! View
Zalan Filip - 12 hours ago
Sarah Fox the one Soph was going on about... reminds me a bit of the huge market thing in Castlemaine. View
Angela Doyle - 13 hours ago
Jacinta Elliott yes please! View
Opinion 107

Dwy Jago - 17 hours ago
Now where do you look when your car is stolen? View
News 10

Andrew Barr faces the forthcoming ACT election with both anticipation and a mild degree of frustration. Anticipation because he's confident...
News 54

Canberrans won't be catching the buses from an underground city interchange after the idea was canned due to the cost....
Food & Wine 30

@The_RiotACT @The_RiotACT
Big changes are in store for a key Woden corner with Zapari unveiling its plans for $400m mixed-use development https://t.co/nVKfiBzBed (10 minutes ago)

@The_RiotACT @The_RiotACT
Tim Gavel reckons the @RaidersCanberra can go one step better than in 2019 and take out the 2020 NRL Premiership. Here are the five reasons he's optimistic https://t.co/4RXZHxYu7x (2 hours ago)