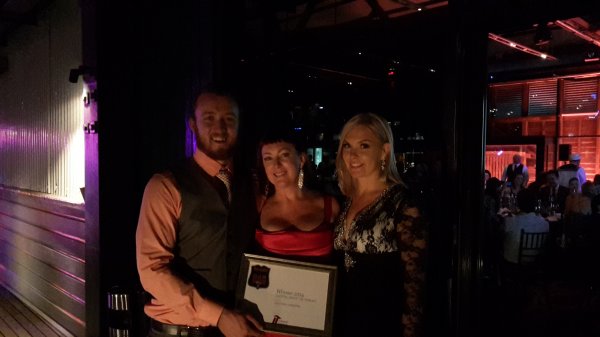 All the thrills, spills and live action from the ‘Oscars’ of the bar industry

On a sweltering September day, 550 bar professionals from around Australia headed down to the picturesque Doltone House at Jones Bay Wharf in Pyrmont for a night of clinking glasses, drinking cocktails and of course, giving out gongs to congratulate the fine efforts of the standouts in the industry. A week of bar industry events culminated in this flagship event, the Bartender Magazine Australian Bar Awards, that has been described as the ‘Oscars’ of the bar industry and which is now in its 14th year. Voted for by the bar industry, the Bar Awards are hotly contested and highly prized.

After cocktails on the deck, with a soundtrack provided by the Brassholes, a six-piece brass ensemble, things kicked off in the dining room, under the expert guidance of MC Clarke Gayford. First up, a series of state awards were presented with venues such as Polit Bar in Canberra,Clever Little Tailor in Adelaide and Amor Bar in Hobart getting a nod for their achievements. In addition, a very happy crew from Miss Moneypenny’s in Noosa was awarded the title of Regional Bar of the Year. They just edged out last year’s winner, Heritage Bar from Townsville, who received an honorable mention for bringing the biggest crew from intestate, with a whopping 16 people from the venue at the dinner.

When it came to the national awards, the crew from Swillhouse Group once again took home the prize for Bar of the Year for The Baxter Inn in Sydney. Other Sydney winners included: Hello Sailor who were named Best Bartenders Bar; Bulletin Place who were once again awarded the title of Cocktail Bar of the Year; The Marlborough Hotel in Newtown who claimed the title of Best Pub; while the Oxford Tavern in the Sydney suburb of Petersham was named Best New Pub, a category the Drink n Dine crew (owners of The Norfolk, Forresters et al) are fast making their own. (For a full list of finalists see attached pdf).

In addition some of the local Sydney operators were given a trophy last night including Fraser Short who was named Pub Operator of the Year in recognition of the work he has done with The Morrison and The Watson’s Bay Hotel in the last couple of years and the team from the Barrelhouse Group, owners of The Barber Shop in Sydney’s CBD.

They were not the lone Sydney winners, however, with The Keystone Group (Bungalow 8, Sugarmill, The Rook, The Winery etc.) taking out the prize for Wine Bar of the Year for The Winery, Best Bar Manager for long-time employee Jason Williams and the Outstanding Contribution award given to business owner John Duncan.

Other bars who took home silverware included Eau De Vie Melbourne for the Bar Team of the Year, Statler & Waldorf in Brisbane for Best Bar Food Selection and fellow Brisbane Bar Lefty’s Old Time Music Hall taking out the hotly contested New Bar of the Year award. The ‘Brisbane Massive’ also brought down the house when one of their own, Edward Quatermass from Papa Jack’s, took out the prize for Rookie of the Year.

For the second year running the finals of the Bartender Magazine Bartender of the Year Competition (proudly sponsored by Havana Club) were held live on stage between awards. After a grueling day of competition on Monday, 8 of the country’s top young bartenders had just four minutes to prepare their signature cocktail in front of an esteemed panel of judges and 550 industry peers! It was nerve-wracking business. Taking out the top prize was Nathan Beasley from Black Pearl in Melbourne. In addition to the title of ‘Bartender of the Year’ the folks from Havana Club will also be flying him to Cuba. In second place was another Black Pearl alum, Mr Sammy Ng and in 3rd place was Joe Sinagra from Western Australia.

Once the awards had wrapped up the partying continued with bus-loads of bar personnel heading to Alexandria for another installment of Put it in Your Mouth, the official Bar Awards after party which by all reports was packed to the rafters with everyone in their best futuristic attire.

For a full list of all the finalists in the 2014 Australian Bar Awards visit: http://australianbartender.com.au/2014/07/08/here-are-all-the-2014-australian-bar-awards-finalists/

The best cocktail bars in Canberra